European researchers are at the forefront when it comes to combining single cell technologies with analytical methods and computational tools to enable unprecedented characterization of human cells. The Horizon 2020 HCA projects aim to deliver an important contribution to the international Human Cell Atlas initiative (HCA) which will create molecularly defined reference maps of all the cells comprising the human body.

“The Human Cell Atlas is a landmark global initiative that will generate a fantastic resource for researchers and industry. However, in order to generate a true atlas, we not only need to molecularly define and categorize all the types of cells that comprise the human body tissues, we also need to draw the map of where they are actually located inside these tissues. Here our technology will play a key role and we are delighted the EU is supporting the work through Horizon 2020,” says CARTANA’s Malte Kühnemund.

“At a scientific meeting in Brussels in early January arranged by the EU commission, CARTANA was given the opportunity to present the single cell analysis field from an SME perspective. This generated great interest among Europe’s single cell key opinion leaders and representatives of the funded projects that attended the meeting. We finished with a consensus among attendees to push for more EU funding for continued work in the area.”

CARTANA’s ISS technology complements the current single cell analysis methods whereby in order to define and classify the types of cells, tissue samples are dissociated (taken apart) into the individual cells that they are comprised of and then analyzed one by one using single cell RNA sequencing techniques. This generates gene expression profiles of individual cells from the tissue, but their location and, hence, the information about the unique organization of the tissue is lost.

In all three EU H2020 funded projects, it is CARTANA’s mission to generate spatial maps of these molecularly defined cell types in the studied tissue samples. “We are delighted to partner with excellent research groups and companies in these three strong consortia, and we believe that applying our ISS technology will be of key importance for progressing the creation of an overall spatial human cell atlas and an enhanced understanding of human biology and disease.” 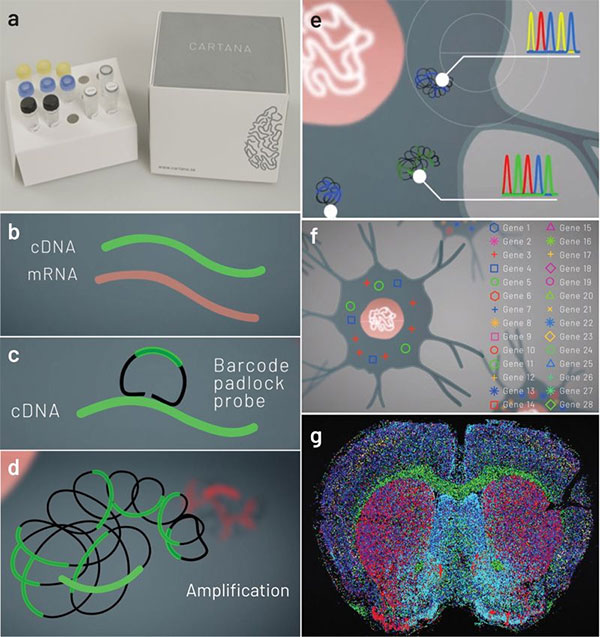 a, CARTANA sample preparation reagent kit. b, mRNAs of cell-type markers on preserved tissues are fixed and reverse transcribed to cDNA. c, Barcoded probes are hybridized and ligated onto the target cDNA. d, Ligated probes are locally amplified, resulting in DNA spots containing multiple copies of the barcodes. e, Barcodes are sequenced in the tissue by five cycles of ISS chemistry and fluorescence imaging. f, After decoding the barcode sequences, the detected gene marker identities are assigned to every DNA spot. g, The target genes are visualized in whole-tissue section.