Single-cell RNA-seq reveals the cellular heterogeneity inherent in the population of cells, which is very important in many clinical and research applications. Recent advances in droplet microfluidics have achieved the automatic isolation, lysis, and labeling of single cells in droplet compartments without complex instrumentation. However, barcoding errors occurring in the cell encapsulation process because of the multiple-beads-in-droplet and insufficient throughput because of the low concentration of beads for avoiding multiple-beads-in-a-droplet remain important challenges for precise and efficient expression profiling of single cells.

In this study, researchers at the Samsung Genome Institute have developed a new droplet-based microfluidic platform that significantly improved the throughput while reducing barcoding errors through deterministic encapsulation of inertially ordered beads. Highly concentrated beads containing oligonucleotide barcodes were spontaneously ordered in a spiral channel by an inertial effect, which were in turn encapsulated in droplets one-by-one, while cells were simultaneously encapsulated in the droplets. The deterministic encapsulation of beads resulted in a high fraction of single-bead-in-a-droplet and rare multiple-beads-in-a-droplet although the bead concentration increased to 1000 μl-1, which diminished barcoding errors and enabled accurate high-throughput barcoding. The researchers successfully validated their device with single-cell RNA-seq. In addition, they found that multiple-beads-in-a-droplet, generated using a normal Drop-Seq device with a high concentration of beads, underestimated transcript numbers and overestimated cell numbers. This accurate high-throughput platform can expand the capability and practicality of Drop-Seq in single-cell analysis. 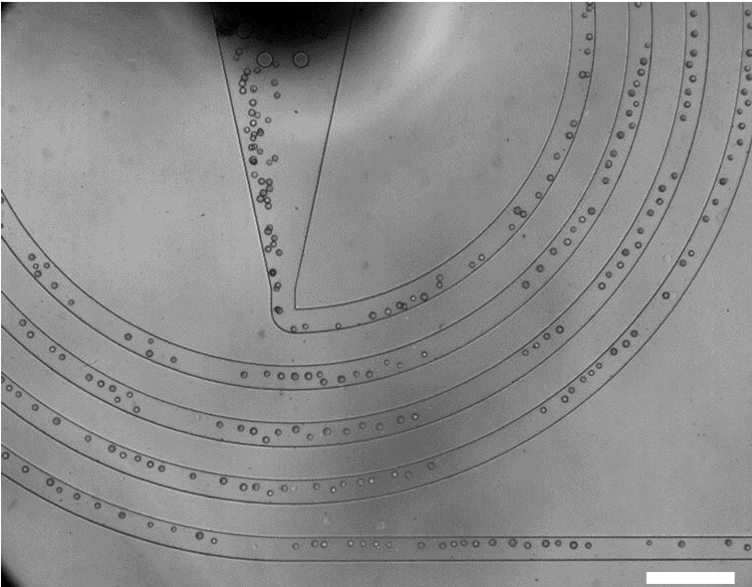