There are billions of neurons in the human brain, and scientists want to know how they are connected. Cold Spring Harbor Laboratory (CSHL) Professor of Neurosciences Anthony Zador, and colleagues Xiaoyin Chen and Yu-Chi Sun, published a new technique in Nature Neuroscience for figuring out connections using genetic tags. Their technique, called BARseq2, labels brain cells with short RNA sequences called “barcodes,” allowing the researchers to trace thousands of brain circuits simultaneously.

Many brain mapping tools allow neuroscientists to examine a handful of individual neurons at a time, for example by injecting them with dye. Chen, a postdoc in Zador’s lab, explains how their tool, BARseq, is different:

“The idea here is that instead of labeling each neuron with a fluorescent dye, we fill it up with a unique RNA sequence, and we call this an RNA barcode. You can sequence the barcode to read out where that neuron sends its projection. You can label like tens of thousands of neurons, all at the same time, and you can still distinguish which axon comes from which neuron.”

The latest generation of this tool, called BARseq2, adds a step to analyze a couple dozen natural neural genes through sequencing chemistry similar to what is used to light up artificial RNA barcodes. Chen says:

“These differences in gene expression usually reflect something that these neurons are doing. For example, if a neuron expresses certain receptors, you will be able to respond to whatever those receptors receive. So compared to anyone that doesn’t have those receptors, they will respond differently to certain signals.” 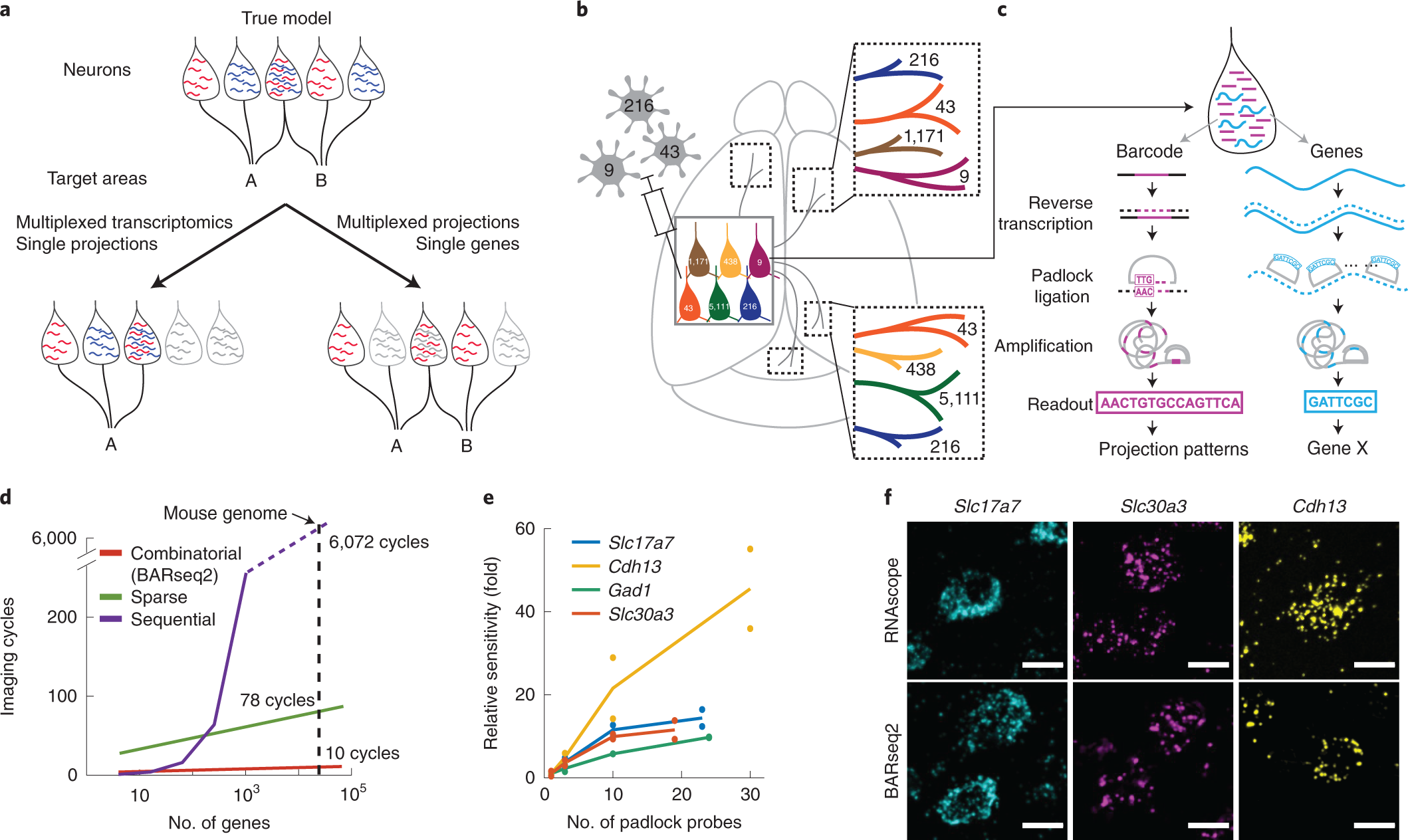 a, Cartoon of an example model in which the relationship between projections and gene expression can only be correctly inferred by multiplexed interrogation of both projections and gene expression. In this model, neurons that express both genes project to both targets A and B, whereas neurons that express only one of the two genes project randomly to either A or B, but not both. Methods that combine multiplexed single-neuron gene expression with data about only a single projection target will conclude that all three gene expression patterns project to target A, thus failing to detect the underlying ‘true’ relationship between gene expression and projections. Similarly, methods that combine multiplexed single-neuron projections with data about only a single gene will also fail to detect any relationship between gene expression and projections. b,c, BARseq2 correlates projections and gene expression at cellular resolution (b). In BARseq2, neurons are barcoded with random RNA sequences to allow projection mapping, and genes are also sequenced in the same barcoded neurons. RNA barcodes and genes are amplified and read out using different strategies (c). d, Theoretical imaging cycles using combinatorial coding (BARseq2), four-channel sequential coding or four-channel sparse coding as used by Eng et al.50. Imaging cycles assumed three additional cycles for BARseq2, one additional round for sparse coding, and no extra cycle for sequential coding for error correction. e, Mean and individual data points of the relative sensitivity of BARseq2 in detecting the indicated genes using different numbers of padlock probes per gene. The sensitivity is normalized to that using one probe per gene. n = 2 slices for each gene. f, Representative images of BARseq2 detection of the indicated genes using the maximum number of probes shown in e compared to RNAscope. Scale bars, 10 µm.

BARseq2 brings brain structure and function together. Sun, a former research technician in Zador’s lab and now a New York University graduate student, compares the brain to a car.

To truly understand how a car works, “you look at all aspects, from the physical and electrical properties to the way each piece links together. Similarly, to understand how the brain works, you have to look at all the different aspects of each neuron, including each neuron’s location in the brain, gene expression, and connection to other neurons.”