In this thesis, we address the problem of identifying and quantifying variants (alternative splicing and genomic polymorphism) in RNA-seq data when no reference genome is available, without assembling the full transcripts. Based on the fundamental idea that each variant corresponds to a recognizable pattern, a bubble, in a de Bruijn graph constructed from the RNA-seq reads, we propose a general model for all variants in such graphs. We then introduce an exact method, called KisSplice, to extract alternative splicing events. Finally, we show that it enables to identify more correct events than general purpose transcriptome assemblers.

In order to deal with ever-increasing volumes of NGS data, we put an extra effort to make KisSplice as scalable as possible. First, to improve its running time, we propose a new polynomial delay algorithm to enumerate bubbles. We show that it is several orders of magnitude faster than previous approaches. Then, to reduce its memory consumption, we propose a new compact way to build and represent a de Bruijn graph. We show that our approach uses 30% to 40% less memory than the state of the art, with an insignificant impact on the construction time. 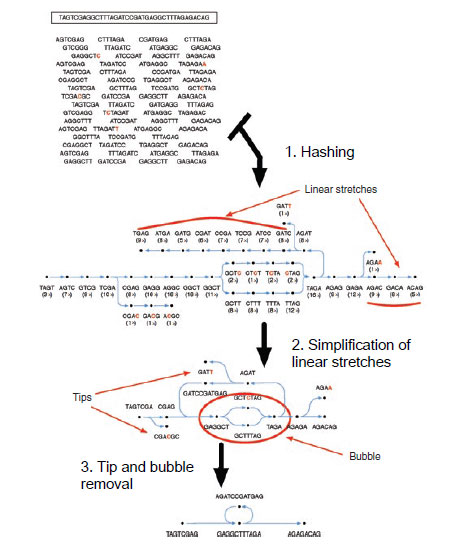 Additionally, we apply the same techniques developed to list bubbles in two classical problems: cycle enumeration and the K-shortest paths problem. We give the first optimal algorithm to list cycles in undirected graphs, improving over Johnson’s algorithm. This is the first improvement to this problem in almost 40 years. We then consider a different parameterization of the classical K-shortest (simple) paths problem: instead of bounding the number of st-paths, we bound the weight of the st-paths. We present new algorithms with the same time complexities but using exponentially less memory than previous approaches.

Availability – KisSplice is an user-friendly tool under active development available for download at: http://kissplice.prabi.fr/