Large discordance between transcriptome and proteome

During in vitro differentiation, pluripotent stem cells undergo extensive remodeling of their gene expression. While studied extensively at the transcriptome level, much less is known about protein dynamics, which can differ significantly from their mRNA counterparts. Here, researchers from Leiden University present genome-wide dynamic measurements of mRNA and protein levels during differentiation of embryonic stem cells (ESCs). They reveal pervasive discordance, which can be largely understood as a dynamic imbalance due to delayed protein synthesis and degradation. Through a combination of systematic classification and kinetic modeling, they connect modes of regulation at the protein level to the function of specific gene sets in differentiation. The researchers further show that their kinetic model can be applied to single-cell transcriptomics data to predict protein levels in differentiated cell types. In conclusion, their comprehensive data set, easily accessible through a web application, is a valuable resource for the discovery of protein-level regulation in ESC differentiation. 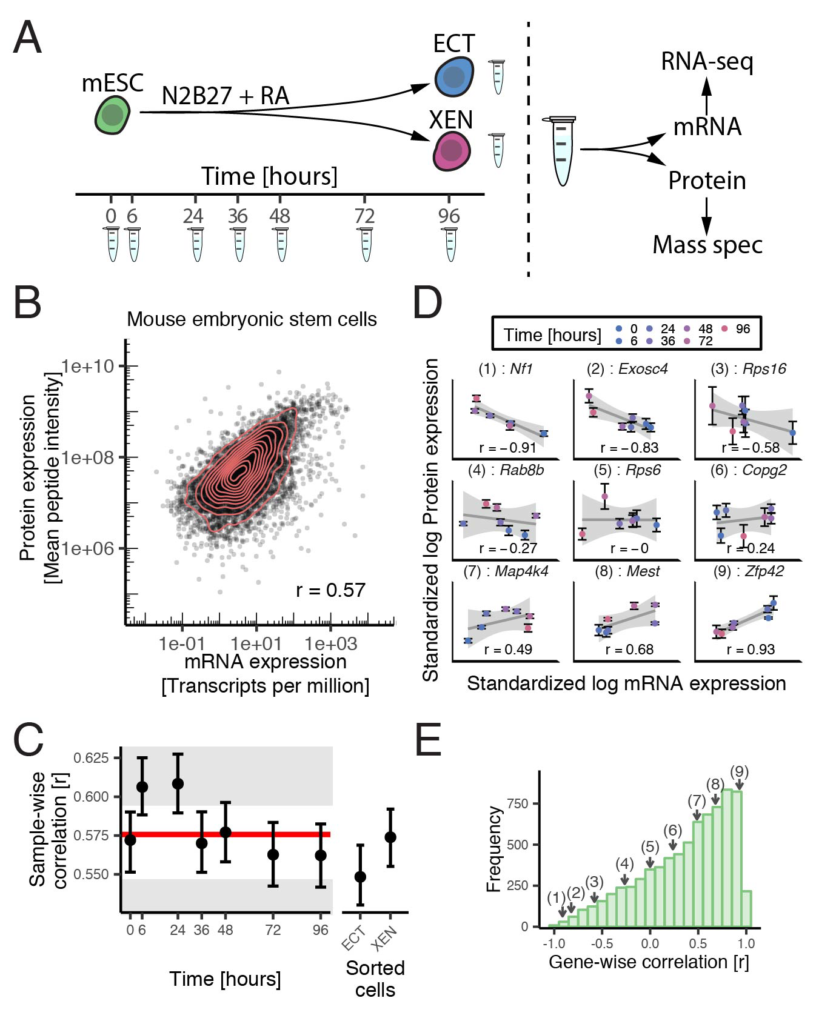 (A) Experimental setup. (B) mRNA versus protein expression of 7459 genes in mESCs. Each data point is an individual gene. Red lines indicate contour lines of equal density. (C) Sample-­wise Pearson correlation between mRNA and protein for all samples. The solid line indicates the average of all time course samples. The grey area indicates the 5% rejection region for all samples being identical (see Methods). Error bars: SEM. (D) mRNA versus protein expression at all time points for nine example genes. Pearson’s correlation r is indicated for each gene. The line and grey area indicate the linear regression fit and 95% CI, respectively. Error bars: SEM. (E) Distribution of the gene-­wise Pearson correlation between mRNA and protein. Numbered arrows indicate the position of the examples shown in D.