Under the microscope, researchers often observe different cell types organizing themselves in peculiar patterns within tissues, or sometimes a rare cell type that stands out by occupying a unique position, exhibiting an unusual shape, or expressing a specific biomarker molecule. To determine the deeper meaning of their observations, they have developed approaches to also access cells’ gene expression patterns (transcriptomes) by analyzing the gene-derived RNA molecules present within them, which they can match with cells’ shapes, spatial positions, and molecular biomarkers.

However, these “spatial transcriptomics” approaches still only capture a fraction of a cell’s total RNA molecules, and cannot deliver the depth and quality of analysis provided by single-cell sequencing methods, which were developed to investigate the transcriptomes of individual cells isolated from tissues or biofluids via next-generation sequencing (NGS) techniques. Nor do they allow researchers to only home in on specific cells based on their location in a tissue, which would greatly facilitate the pursuit of disjointed cell populations, or rare, difficult-to-isolate cells like rare brain cells with unique functions, or immune cells that invade tumors. In addition, because the original tissue environment is disrupted, many spatial transcriptomics and all single-cell sequencing methods prevent researchers from revisiting their samples to perform follow-up analysis, and they are costly because they require specialized instruments or reagents.

A new advance made at the Wyss Institute for Biologically Inspired Engineering at Harvard University now overcomes these limitations with a DNA nanotechnology-driven method called “Light-Seq.” Light-Seq allows researchers to “geotag” the full repertoire of RNA sequences with unique DNA barcodes exclusive to a few cells of interest. These target cells are selected using light under a microscope via a fast and effective photocrosslinking process.

With the help of a new DNA nanotechnology, the barcoded RNA sequences are then translated into coherent DNA strands, which can then be collected from the tissue sample and identified using NGS. The Light-Seq process can be repeated with different barcodes for different cell populations within the same sample, which is left intact for follow-up analysis. With a performance comparable to single-cell sequencing methods, it significantly broadens the depth and scope of investigations possible on a tissue sample. The method is published in Nature Methods. 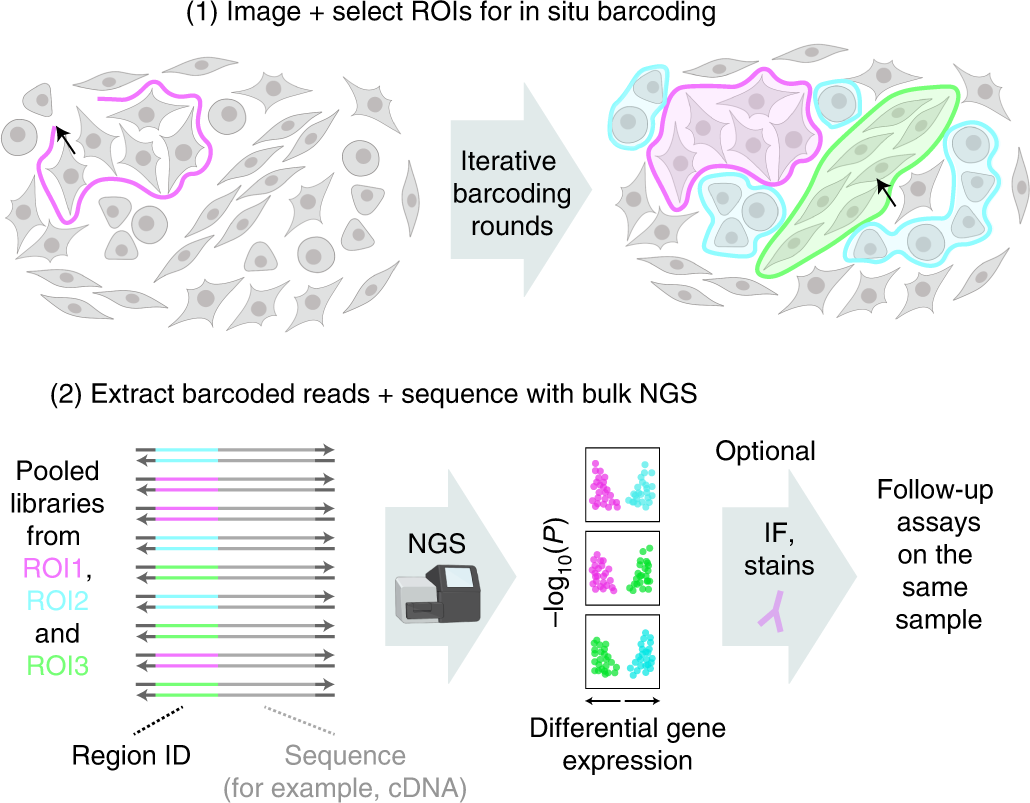 Light-Seq enables selective barcoding of custom selected cells or tissue regions in situ for transcriptomic sequencing. Step (1): Target ROIs can be selected based on phenotypic factors including spatial location, morphology or protein biomarkers in automated or manual fashion after imaging. Custom selection allows large or small regions, and contiguous or disjointed cell groups to be flexibly labeled by photocrosslinking of DNA barcodes, which are then converted into sequenceable indices. For multiplexed targeting of different cell groups or regions, the process can be iterated using different barcode sets. Step (2): After light-directed labeling, barcoded cDNAs are released and prepared into pooled sequencing libraries which are read by standard NGS platforms. The obtained profiles can be analyzed to identify differentially expressed genes. Optionally, the same sample can be revisited after sequencing to perform follow-up assays, such as high-resolution imaging, morphology or protein labeling.

“Light-Seq’s unique combination of features fills an unmet need: the ability to perform imaging-informed, spatially prescribed, deep-sequencing analysis of hard, if not impossible-to-isolate cell populations or rare cell types in preserved tissues, with one-to-one correspondence of their highly refined gene expression state with spatial, morphological, and potentially disease-relevant features,” said Peng Yin, Ph.D., one of four corresponding authors and a Core Faculty member at the Wyss Institute, where his group developed Light-Seq. “It thus has potential to fast-forward the biological discovery process in various biomedical research areas.” Yin is also a Professor of Systems Biology at Harvard Medical School (HMS).

From barcoding in situ to sequencing ex situ

To be able to specifically sequence the RNA molecules of neuronal cells in the functionally distinct layers of the mouse retina (graphic on the left), the team applied a new approach for “photocrosslinking” DNA barcodes to copies of RNA molecules in the retina’s individual light-selected layers (shown here in magenta, light blue and green). They then used a DNA nanotechnology-powered stitching technique to generate continuous sequences that could be mildly extracted from the tissue and eventually read via NGS. The cross-sections remained fully intact and were used for follow-up localizations of proteins encoded by RNA molecules that were enriched in the individual layers. Credit: Wyss Institute at Harvard University

The Light-Seq project was spearheaded by Jocelyn (Josie) Kishi, Ph.D., Sinem Saka, Ph.D., and Ninning Liu, Ph.D. in Yin’s group at the Wyss and Emma West, Ph.D. in Constance Cepko’s lab at HMS. Previously, Kishi, Saka, and West had developed SABER-FISH as a spatial transcriptomics method for imaging gene expression directly in intact tissues (in situ).

“With SABER-FISH, we still were orders of magnitude away from capturing cells’ complete gene expression programs, with many thousands of different RNA molecules per cell. RNA molecules are just too densely packed to be captured in their entirety using present imaging techniques,” said co-first and co-corresponding author Kishi. “Light-Seq solves this problem by combining high-resolution barcode labeling with full-transcriptome sequencing via NGS, giving us the best of both worlds and additional key advantages.” At the time of the study, Kishi was a Wyss Technology Development Fellow on Yin’s team, and is now pursuing a path toward commercializing Light-Seq together with some of her co-authors.

“To specifically sequence the cells in custom-selected locations of intact tissue samples, we developed a new approach for photocrosslinking DNA barcodes to copies of RNA molecules, and a DNA nanotechnology-powered procedure that makes them and their attached RNA sequences readable by NGS,” said co-first author Liu, a Wyss Staff Scientist in Yin’s group who previously co-developed a parallelized DNA barcoding platform for a super-resolution imaging method called “Action-PAINT” that also became one of the core components of Light-Seq. 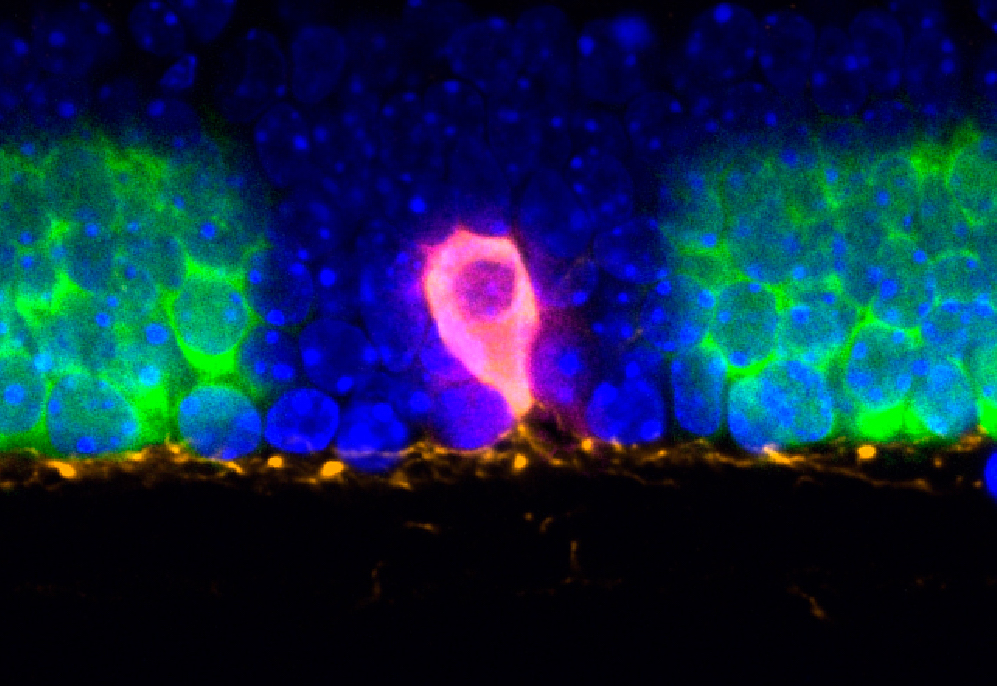 Light-Seq enabled the isolation of the full transcriptome of a very rare type of cell, known as “dopaminergic amacrine cell” (DAC, magenta), by retrieving merely four to eight individually barcoded cells per cross-section. DACs are extremely hard-to-isolate, also because of their intricate connections to other cells in the retina that were differently barcoded using Light-Seq. Credit: Wyss Institute at Harvard University

Following the first validation of Light-Seq in cultured cells, Yin’s team wanted to apply it to a complex tissue and partnered up with the group of Constance Cepko, Ph.D. at HMS. Cepko is one of the study’s corresponding authors and the Bullard Professor of Genetics and Neuroscience in the Blavatnik Institute at HMS, and investigates the development of the retina as a model of the nervous system. Kishi, Saka, and Liu joined forces with West in Cepko’s group to apply Light-Seq to cross-sections of the mouse retina and profile three major layers with different functions. The researchers reached a sequence coverage comparable to single-cell sequencing methods, and found that thousands of RNAs were enriched between the retina’s three major layers. They also showed that after sequence extraction, the tissue samples remained intact and could be further imaged for proteins and other biomolecules.

3D reconstruction of a dopaminergic amacrine cell (DAC) after it had been specifically barcoded using the Light-Seq technology. Credit: Wyss Institute at Harvard University

“Taking Light-Seq to the extreme, we were able to isolate the full transcriptome of a very rare cell type, known as ‘dopaminergic amacrine cells’ (DACs), which is extremely hard to isolate because of its intricate connections to other cells in the retina, by retrieving merely four to eight individually barcoded cells per cross-section,” said West. DACs are involved in regulating the eye’s circadian rhythm by fine-tuning visual perception to different light exposures during the day-night cycle. “Light-Seq also picked up RNAs that were specifically expressed in DACs at low levels, as well as dozens of DAC-specific biomarker RNAs that, to our knowledge, had not been described before, which opens new opportunities to study this rare cell type,” added West, who at the time of the study was a graduate student and then Postdoctoral Fellow with Cepko, and has now joined Kishi in her Light-Seq commercialization effort.

Opening the field of spatial transcriptomics up to NGS also adds information on the level of a single RNA species.

“Our sequencing data clearly showed that Light-Seq can determine natural variations in the structure of RNAs. Going forward, we’re very interested in using Light-Seq to better understand the interplay between the immune system, disease-propagating cells, and different therapeutic strategies such as gene and cell therapy,” said Kishi.

“The Light-Seq technology developed in Peng Yin’s group in the Wyss Institute’s Molecular Robotics Initiative yet again shows how pursuing a totally unconventional approach and leveraging synthetic biology can lead to a disruptive technology with great potential for advancing both fundamental research and clinical medicine,” said Wyss Founding Director Donald Ingber, M.D., Ph.D., who is also the Judah Folkman Professor of Vascular Biology at Harvard Medical School and Boston Children’s Hospital, and the Hansjörg Wyss Professor of Bioinspired Engineering at the Harvard John A. Paulson School of Engineering and Applied Sciences.