Researchers from the University of Texas at Austin comprehensively tested and compared four RNA-seq pipelines on the accuracies of gene quantification and fold-change estimation on a novel total RNA benchmarking dataset, in which small non-coding RNAs are highly represented along with other long RNAs. The four RNA-seq pipelines were of two commonly-used alignment-free pipelines and two variants of alignment-based pipelines. They found that all pipelines showed high accuracies for quantifying the expressions of long and highly-abundant genes. However, alignment-free pipelines showed systematically poorer performances in quantifying lowly-abundant and small RNAs. 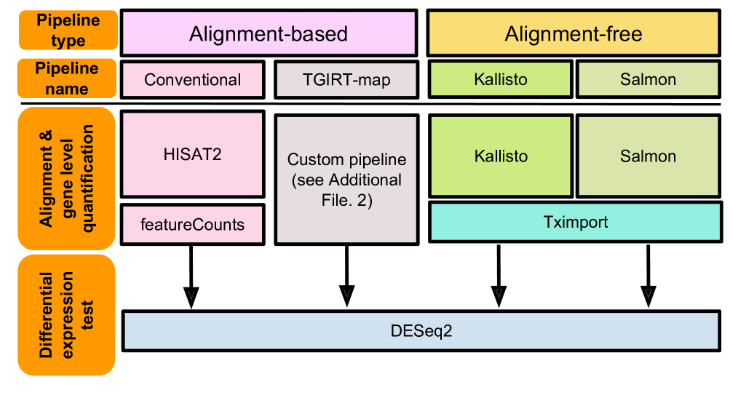 The researchers used two pipelines each for the alignment-based and alignment-free approach. The alignment-based pipelines consisted of (A) a HISAT2+feature Counts pipeline using HISAT2 for aligning reads to the human genome and using feature Counts for gene counting, and (B) TGIRT-map, a customized pipeline for analyzing TGIRT-seq data. Two alignment-free tools, Kallisto and Salmon, were used for quantifying transcripts. For alignment-free tools, gene-level abundances were summarized by Tximport. All differentially-expressed gene callings were done by DESeq2