Linking the past and present: Reconstructing the dragonfly and damselfly family tree

A team of researchers including a member of the University of Tsukuba, Japan, unravels the evolutionary history of dragonflies and damselflies, allowing the first phylogenetic reconstruction of the order Odonata. 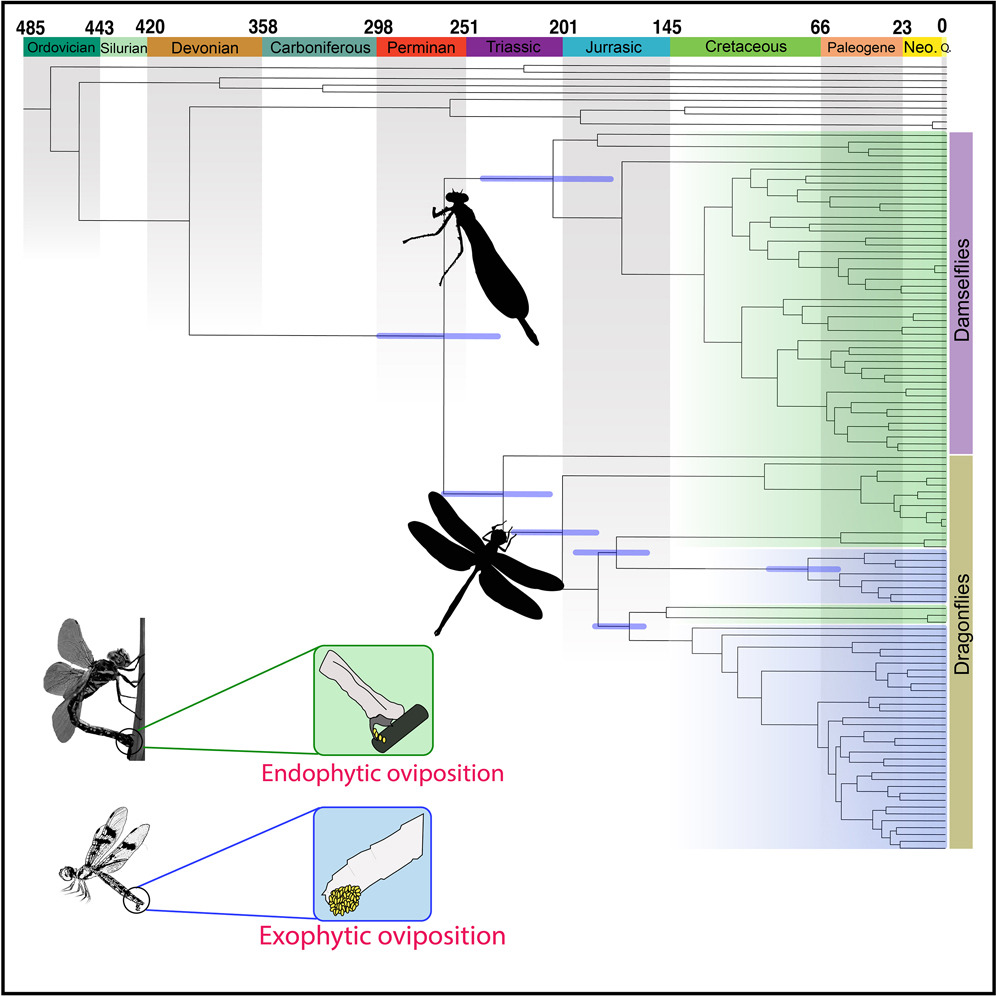 Many people hate insects, but the iridescent colors and elegant flying style of dragonflies and damselflies have made them firm favorites worldwide. They have been around in some form for hundreds of millions of years, but the evolutionary history of these relics of prehistoric life has been poorly understood—until now.

In newly published study, researchers including a member of the University of Tsukuba have applied transcriptomics, a type of gene sequencing, to reconstruct the phylogeny of the insect order Odonata. By calibrating this sequencing using the fossil record, they have been able to determine when dragonflies and damselflies first emerged.

Transcriptomics is the study of the collection of ribonucleic acid (RNA)—known as the transcriptome—that is present in a cell at any given time. This RNA contains a wealth of information and can be used to determine relationships among different members of a species. Understanding these relationships is essential for reconstructing evolutionary histories, or phylogenies, which are essentially like a family tree in a genetic sense.

“This is the first transcriptome-based phylogenetic reconstruction of the order Odonata,” says one of the authors of the study Professor Ryuichiro Machida. “We analyzed a total of 2,980 protein-coding genes in 105 species, covering all but two of the order’s families.”

There are thousands of living (extant) species of Odonata, but few have been analyzed in a phylogenetic context, and most species have been identified or differentiated on the basis of physical characteristics, such as wing patterns or larvae appearance. Although comparing appearances can be useful for extant species, it’s not always as helpful when trying to reconstruct evolutionary histories—that’s where transcriptomics and fossil calibration are useful.

“A robust and reliable phylogenetic reconstruction is essential for dependable estimates of species divergence times,” explains Machida. “Different fossil calibration schemes can be applied, but these can greatly impact the range of estimated dates. We used a comprehensive fossil dataset combining newly assessed fossils with data from the literature to produce a well-resolved and robustly time-calibrated phylogeny for Odonata.”

This reconstruction provides the most comprehensive divergence time estimates for Odonata to date, meaning the researchers were able to determine when dragonflies and damselflies first appeared (around 200 million years ago). They were even able to estimate the time at which certain evolutionary characteristics developed, such as ovipositors (tube-shaped organs for laying eggs). Species that once flourished but have since died out were also identified. Given that these species can now only be identified in the fossil record, transcriptomics and phylogenetic reconstructions provide a unique opportunity to better understand the connections between extant and extinct species. Studies of a similar nature could shed light on equally obscured genetic histories for other species.