Centromeres are curious structures. These specially organized chromosomal regions are best known for their unique and critical role in cell division, in which they are well understood to serve as the sites at which kinetochores assemble and attach chromosomes to spindle microtubules. As DNA structures, centromeres are now also understood to participate in that most central of genomic functions – gene expression via the synthesis of RNA transcripts. But how the centromere balances these two tasks remains an open question. In a new article in Nucleic Acids Research, Dr. Sue Biggins, Professor and Director of Fred Hutch’s Basic Sciences Division, and postdoctoral fellow Dr. Sabrine Hedouin sought to understand how transcription influences the centromere’s function in cell division.

Understanding the function of cenRNAs “has been challenging since the origin of centromere transcription remained unknown because of its very low abundance,” explained Dr. Hedouin. Thus, to better understand these RNAs, the group first employed a new strategy, termed Iso-Seq (long-read RNA isoform sequencing), to characterize the transcriptional profile of the centromere. One notable characteristic of cenRNAs revealed by these data is that transcription is not initiated within the centromere. Rather, it is initiated on nearby DNA, in the so-called pericentromeric region, and extends into the centromere itself. The authors also discovered that cenRNA expression varies throughout the cell cycle. While cenRNAs are expressed during S phase, when DNA is being replicated, they are not expressed during other phases, such as G1. Interestingly, transcription was still initiated in the pericentromeric regions during these other phases but was consistently terminated before reaching the centromere. This pattern, they explain, suggested the existence of a mechanism that blocks centromeric transcription when the kinetochore is assembled and functioning.

The group next aimed to identify the mechanism that regulates the accessibility of centromeres to transcription throughout the cell cycle. They focused their attention on Cbf1, a protein known to bind the centromere and repress cenRNA production. Iso-seq profiling of cbf1 mutant cells showed greatly increased cenRNA levels during G1, resulting in transcriptional profiles more akin to S phase cells. To more directly test whether Cbf1 functions as a “roadblock” to centromeric transcription, the authors reconstituted centromeric transcription in vitro and found that directing either Cbf1 or the established roadblock factor Reb1 to bind a specific region of the centromere was sufficient to induce transcriptional termination at that site.

Finally, the group asked what role Cbf1’s roadblock activity plays in promoting proper centromere function. Because the cbf1 mutant could play multiple roles in cell division, it was insufficient to specifically examine the roadblock function. But, the authors reasoned, the role of the roadblock could be directly tested by replacing the Cbf1 binding site on one chromosome with a binding site for Reb1, which does not normally associate with the centromere. They found that Reb1 was partly sufficient to block cenRNA production during G1 phase as well as to prevent the chromosome segregation defects normally associated with loss of Cbf1 binding, confirming that Cbf1’s roadblock activity plays an important role in centromere function.

This work revealed important new details about how transcription is locally regulated to promote centromere function.

“[We] found a mechanism through which cells protect their centromeres from harmful untimely transcription that could potentially be conserved in other species,” Dr. Hedouin summarized. And while these findings partially resolve the paradoxical nature of cenRNA, “it still remains unclear how centromere transcription and/or centromeric non-coding RNA directly participate in the proper activity of the centromere in budding yeast.” In future work, she muses, “our characterization of the centromere transcriptional landscape provides a valuable guide to designing targeted strategies to uniquely modulate centromere transcription or centromeric RNA levels and assess their functions.” Finally, said Dr. Hedouin, “I would also like to acknowledge our collaborators, Glennis Logsdon (from Evan Eichler’s lab) and Jason Underwood whose work and expertise have been instrumental in this project.” 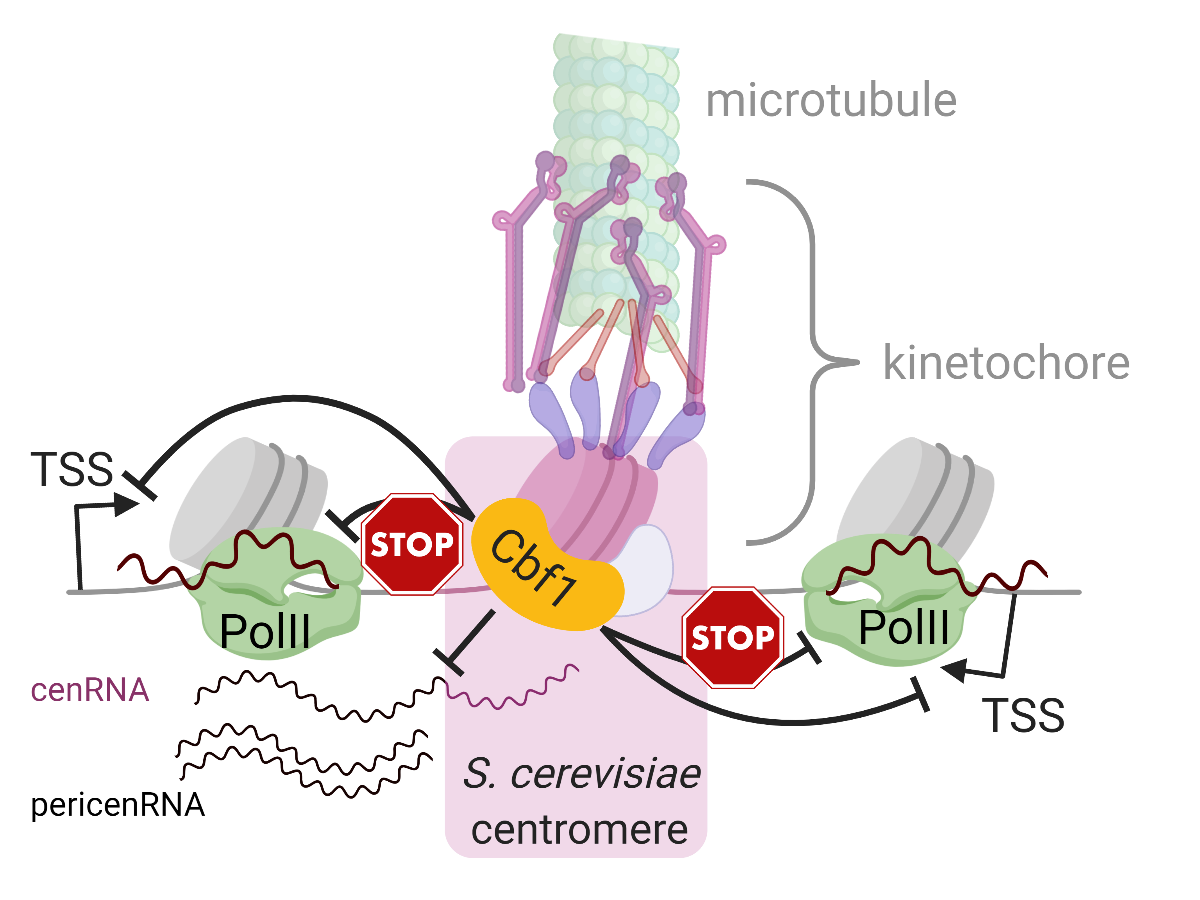 Cbf1 binding to the centromere acts as a roadblock to prevent centromeric transcription. Image provided by Dr. Sabrine Hedouin.