From The Scientist By Karen Zusi

The advent of mRNA sequencing for individual cells has given scientists unprecedented insight into the diversity of cell populations once thought to be uniform. But finding an analysis sensitive enough to pick up rare cell types within a tissue is a challenge, says Dominic Grün, a quantitative biologist now at the Max Planck Institute of Immunobiology and Epigenetics in Germany. 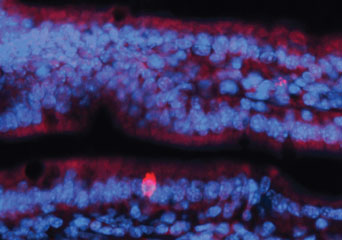 To develop a technique that could pinpoint uncommon cells, Grün started with sequencing the cells in intestinal organoids and creating clusters of similar transcriptome profiles. Knowing how much gene-expression variability he could expect in a group of homogeneous cells, Grün picked out clusters of cells whose expression profiles exceeded this threshold. “The trick was to quantitate that,” he says. “I wanted to develop an algorithm that would find these rare cells without any information—without relying on previously known marker genes.”

Grün’s algorithm detected enteroendocrine cells, rare, hormone-producing intestinal cells marked by high expression of the Reg4 gene. But the team delved deeper, enriching a new set of organoids for these rare cells and mining for previously unknown enteroendocrine subtypes. The tool was sensitive enough to pick up cell types represented by only a single cell.

“Most universities don’t have the computational infrastructure to analyze data sets like this,” says Chris Lengner, a cell biologist at the University of Pennsylvania who did not participate in the study. “If they can make this tool readily available and user-friendly, it would probably have a pretty big impact.”