Shirley Pepke – The complexity of cancer has famously eluded conquering by modern medicine. Every tumor has many aberrations that drive its growth. As a result, treatments that target single vulnerabilities are typically of short-lived efficacy. After being diagnosed with advanced stage ovarian cancer in 2013, I wagered that what was needed was an algorithm capable of digesting and analyzing the complexity to provide a detailed view into the multitude of factors at work in a given tumor.

To pursue this goal, I began a collaboration with Greg Ver Steeg, who specializes in analyzing big data, to bring state-of-the-art machine learning to bear on the recently released large-scale data from the Cancer Genome Atlas (TCGA). TCGA contains publicly available comprehensive maps of the key genomic changes in 33 types of cancer.

During our initial discussions, it was clear that CorEx showed promise, but required refinement to squeeze as much information as possible out of noisy gene expression data. Subsequent innovations in this context allow CorEx to learn patterns efficiently from relatively small numbers of patient genomic profiles.

Greg and I used the improved CorEx to find patterns in RNA-seq gene expression data for 420 ovarian tumors. CorEx was able to find an extraordinary amount of structure in the data, much of which was associated with known cellular functions and pathways. We identified genes whose expression seems to be linked in ovarian cancer and with all these expression dependencies mapped out, we could begin to ask how they fit into a larger framework for understanding of tumor biology and treatment. 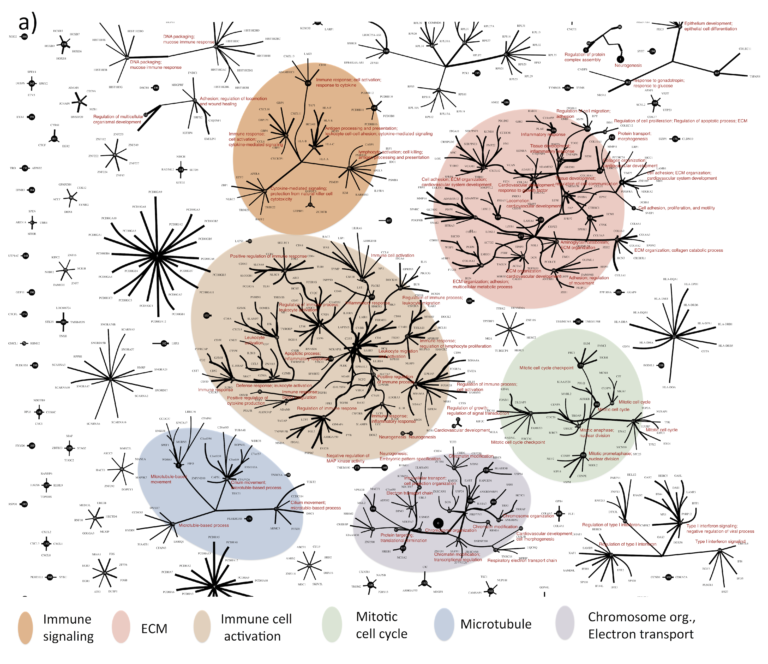 One of the questions we asked was how to combine treatments in order to extend patient survival. We were able to show that combinations of the CorEx factors (i.e. patterns of gene expression that CorEx identified) were significantly associated with survival among the TCGA patients. This suggests a method for selecting combination therapies based on these patterns for future clinical trials.

We also asked whether any factors associate with long term survival (a particular concern for me!). One specific factor stood out as a candidate. It contained several proteins regulating stemness properties – such as the ability of cells to self-renew and differentiate into different cell types – that are implicated in aggressive metastatic disease and chemoresistance.

Our analysis shows that tumors containing many cells with stemlike gene expression correlate with poor long-term patient survival. CorEx is especially good at detecting weak correlations in large sets of variables, and this is likely why it was able to detect this particular pattern for the first time in ovarian cancer expression data.

Availability – The algorithm implementation used in this work can be obtained from: https://github.com/gregversteeg/bio_corex.