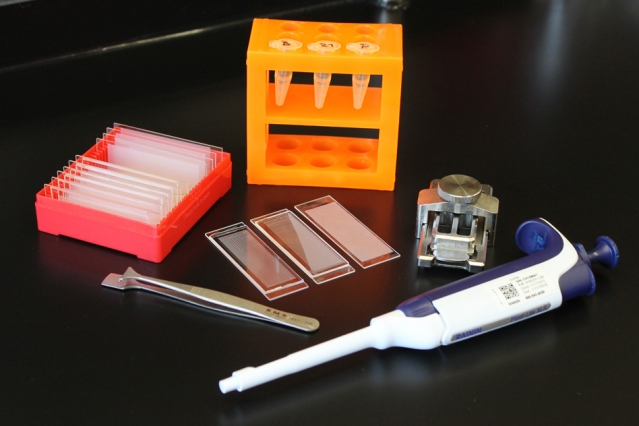 Portable tool could help scientists learn more about cells’ roles in many diseases.

Sequencing messenger RNA molecules from individual cells offers a glimpse into the lives of those cells, revealing what they’re doing at a particular time. However, the equipment required to do this kind of analysis is cumbersome and not widely available.

MIT researchers have now developed a portable technology that can rapidly prepare the RNA of many cells for sequencing simultaneously, which they believe will enable more widespread use of this approach. The new technology, known as Seq-Well, could allow scientists to more easily identify different cell types found in tissue samples, helping them to study how immune cells fight infection and how cancer cells respond to treatment, among other applications.

“Rather than trying to pick one marker that defines a cell type, using single-cell RNA sequencing we can go in and look at everything a cell is expressing at a given moment. By finding common patterns across cells, we can figure out who those cells are,” says Alex K. Shalek, the Hermann L.F. von Helmholtz Career Development Assistant Professor of Health Sciences and Technology, an assistant professor of chemistry, and a member of MIT’s Institute for Medical Engineering and Science.

Shalek and his colleagues have spent the past several years developing single-cell RNA sequencing strategies. In the new study, he teamed up with J. Christopher Love, an associate professor of chemical engineering at MIT’s Koch Institute for Integrative Cancer Research, to create a new version of the technology that can rapidly analyze large numbers of cells, with very simple equipment.

“We’ve combined his technologies with some of ours in a way that makes it really accessible for researchers who want to do this type of sequencing on a range of different clinical samples and settings,” Love says. “It overcomes some of the barriers that are facing the adoption of these techniques more broadly.”

Love and Shalek are the senior authors of a paper describing the new technique in the Feb. 13 issue of Nature Methods. The paper’s lead authors are Research Associate Todd Gierahn and graduate students Marc H. Wadsworth II and Travis K. Hughes.

Most cells in the human body express only a fraction of the genes found in their genome. Those genes are copied into molecules of messenger RNA, also known as RNA transcripts, which direct the cells to build specific proteins. Each cell’s gene expression profile varies depending on its function.

Sequencing the RNA from many individual cells of a blood or tissue sample offers a way to distinguish the cells based on patterns of gene expression. This gives scientists the opportunity to determine cell functions, including their roles in disease or response to treatment.

Key to sequencing large populations of cells is keeping track of which RNA transcripts came from which cell. The earliest techniques for this required sorting the cells into individual tubes or compartments of multiwell plates, and then separately transforming each into a sequencing library.

That process works well but can’t handle large samples containing thousands of cells, such as blood samples or tissue biopsies, and costs between $25 and $35 per cell. Shalek and others have recently developed microfluidic techniques to help automate and parallelize the process considerably, but the amount of equipment required makes it impossible to be easily transported.

Shalek and Love, who have worked on other projects together, realized that technology Love had previously developed to analyze protein secretions from single cells could be adapted to do single-cell RNA sequencing rapidly and inexpensively using a portable device.

Over the past several years, Love’s lab has developed a microscale system that can isolate individual cells and measure the antibodies and other proteins that each cell secretes. The device resembles a tiny ice cube tray, with individual compartments for each cell. Love also developed a process known as microengraving that uses these trays, which can hold tens of thousands of cells, to measure each cell’s protein secretions.

To use this approach for sequencing RNA, the researchers created arrays of nanowells that each capture a single cell plus a barcoded bead to capture the RNA fragments. The nanowells are sealed with a semipermeable membrane that allows the passage of chemicals needed to break the cells apart, while the RNA stays contained. After the RNA binds to the beads, it is removed and sequenced. Using this process, the cost per cell is less than $1.

Similar to previous single-cell RNA sequencing techniques, the Seq-Well process captures and analyzes about 10 to 15 percent of the total number of RNA transcripts per cell.

“That is still a very rich set of information that maps to several thousand genes,” Love says. “If you look at sets of these genes, you can start to understand the identity of those cells based on the sets of genes that are expressed in common.”

In this paper, the researchers used Seq-Well to analyze immune cells called macrophages, which were infected with tuberculosis, allowing them to identify different pre-existing populations and responses to infection. Shalek and members of his lab also brought the technology to South Africa and analyzed tissue samples from TB- and HIV-infected patients there.

“Having a simple system that can go everywhere I think is going to be incredibly empowering,” Shalek says.

Jonathan Weissman, a professor of cellular and molecular pharmacology at the University of California at San Francisco, says he expects this technology could significantly boost access to rapid RNA sequencing.

“It’s a really nice technical innovation that will help democratize the technology by lowering the price of doing single-cell RNA sequencing in the field, allowing it to be done in places where it couldn’t be done previously,” says Weissman, who was not involved in the research.

Love’s lab is now using this approach to analyze immune cells from people with food allergies, which could help researchers determine why some people are more likely to respond well to therapies designed to treat their allergies. “There are still a lot of unknowns in chronic diseases, and these types of tools help you uncover new insights,” Love says.

The research team has also joined forces with clinical investigators at Dana-Farber/Harvard Cancer Center to apply this technology toward the discovery of new combination immunotherapies to treat cancer as part of the Bridge Project partnership.

The research was funded by the Searle Scholars Program, the Beckman Young Investigator Program, an NIH New Innovator Award, the Bill and Melinda Gates Foundation, the Ragon Institute, the Burroughs Wellcome Foundation, the W.M. Keck Foundation, the U.S. Army Research Office through MIT’s Institute for Soldier Nanotechnologies, and the Koch Institute Support Grant from the National Cancer Institute.