Scientists at the University of Bristol have developed new biological parts that are able to shape the flow of cellular processes along DNA.

The work, now published in the journal Nature Communications, offers a fresh perspective on how information is encoded in DNA and new tools for building sustainable biotechnologies.

Despite being invisible to the naked eye, microorganisms are integral for our survival. They operate using DNA, often referred to as the code of life. DNA encodes numerous tools that could be useful to us, but we currently lack a complete understanding of how to interpret DNA sequences.

Matthew Tarnowski, first author and a PhD student in Bristol’s School of Biological Sciences, said: “Understanding the microbial world is tricky. While reading a microbe’s DNA with a sequencer gives us a window into the underlying code, you still need to read a lot of different DNA sequences to understand how it actually works. It’s a bit like trying to learn a new language, but from only a few small fragments of text.”

To tackle this problem, the Bristol team focused on how the information encoded in DNA is read, and specifically, how the flow of cellular processes along DNA are controlled. These biological information flows orchestrate many of the core functions of a cell and an ability to shape them would offer a way to guide cellular behaviours.

Taking inspiration from nature, where it is known that flows on DNA are often complex and interwoven, the team focused on how these flows could be regulated by creating “valves” to tune the flow from one region of DNA to another. 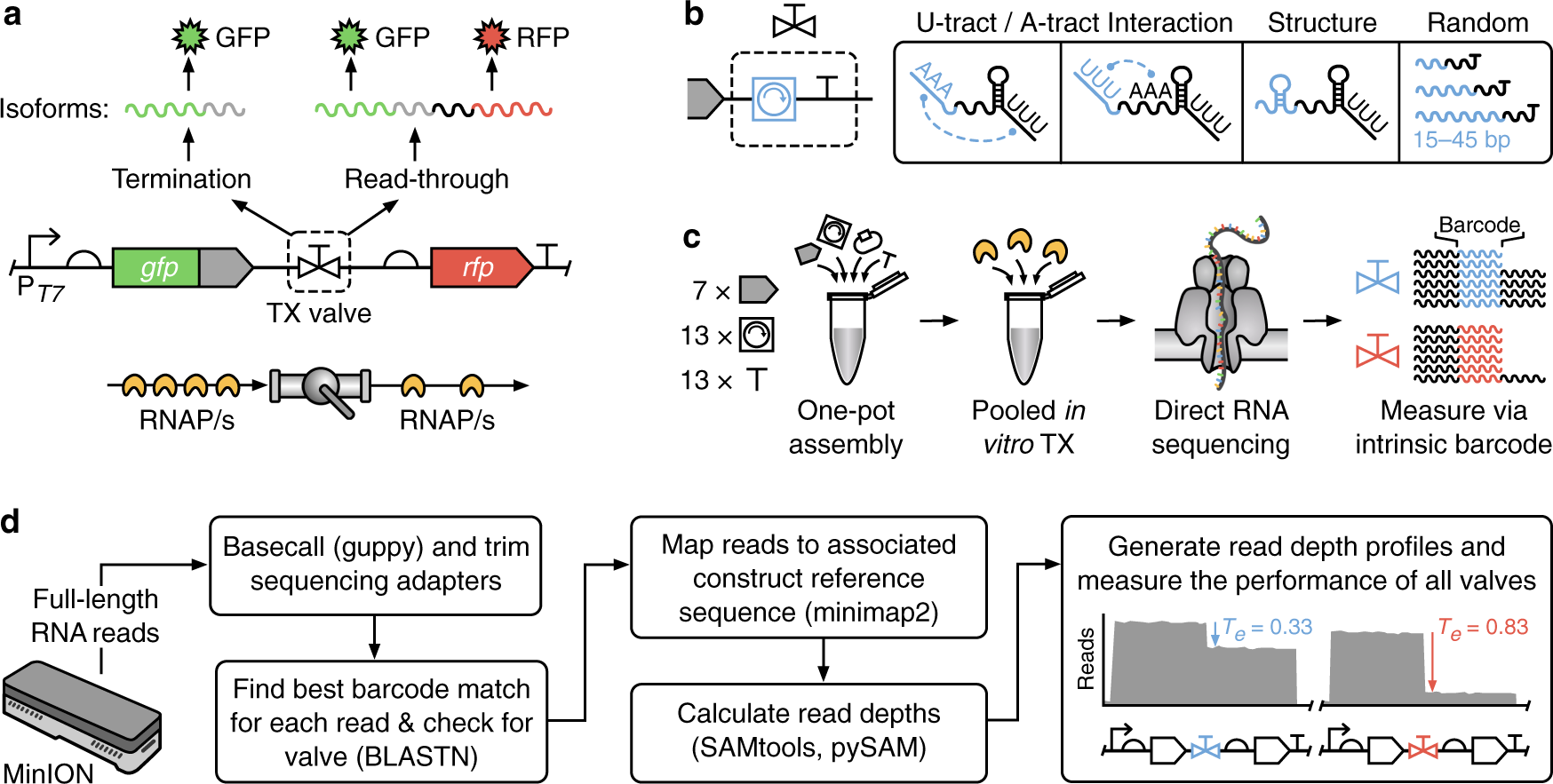 a Schematic of the genetic construct used to characterize transcriptional valves. A transcriptional valve controls the ratio of RNA polymerase (RNAP) termination to read-through and thus the proportions of transcript isoforms produced. b Our modular transcriptional valves comprise a ‘core terminator’ and ‘modifier’ sequence (blue) used to tune termination efficiency. Various modifiers were considered to interact with the U- and A-tract of the core terminator, form small secondary structures in the RNA, and act as different length inert spacing elements. c The steps involved in the assembly of the modular transcriptional valve library and its pooled characterization using nanopore-based direct RNA sequencing. d Analysis pipeline used to generate valve-specific read depth profiles and calculate termination efficiencies (Te) from pooled direct RNA sequencing data. Key computational tools are shown in parentheses.

Dr Thomas Gorochowski, senior author and Royal Society University Research Fellow at the University of Bristol, said: “Similar to a valve that controls the rate that a liquid flows through a pipe, these valves shape the flow of molecular processes along DNA. These flows allow cells to make sense of the information stored in their genomes and the ability to control them enables us to reprogram their behaviours in useful ways.”

Designing new biological parts can typically take a huge amount of time. To get around this problem, the team employed methods to enable the rapid assembly of many DNA parts in parallel and a sequencing technology based on ‘nanopores’ that allowed them to simultaneously measure how each part worked.

Dr Gorochowski added: “Harnessing the unique features of nanopore sequencing was the step needed to unlock our ability to effectively design the biological valves. Rather than separately building and testing a couple at a time, we could instead assemble and test thousands in a mixed pool, helping us pull apart their design rules and better understand how they work.”

The authors go on to further show how valves can be used for regulating other biological components in the cell, opening avenues to the future simultaneous control of many genes and complex editing of genomes.

Looking forward, the team are currently considering how this technology could be used responsibly. Dr Mario Pansera, distinguished researcher of the Post-Growth Innovation Lab at the University of Vigo, Spain, said: “Now that they have crafted these tools, a big question is how they can be used responsibly and equitably in the real world. Post-growth entrepreneurship offers useful approaches for imagining more deliberative and inclusive ways to put such technology at the service of people.”