Scientists from two institutes at the Vienna BioCenter (VBC) have developed a method to identify and characterise microRNAs in individual cells of living animals. The technique, called “mime-seq”, enables to study microRNAs in their endogenous context at single-cell resolution, and was now published in the journal “Nature Methods”.

Small non-coding RNAs, such as microRNAs, play a key role in the regulation of gene expression and thus crucially influence the development and life functions of animals and plants. Two teams of scientists based at research institutes at the Vienna BioCenter (VBC) have overcome a major challenge to study microRNAs.

Until now, scientists were limited in linking microRNA functions to the biology of specific cell types in living organisms, as they are part of complex tissues. This was largely because established techniques to profile microRNAs do not work reliably and at cellular resolution. As a result, research in this field was largely confined to cell culture and other “in vitro” approaches.

In their novel “mime-seq” technique, the VBC scientists use an enzyme that chemically “tags” microRNAs in specific cell types in living animals. This enhances the resolution at which microRNAs can be retrieved in a tissue of interest to the level of individual cells.

The scientists used nematode worms and fruit flies to demonstrate that “mime-seq” can indeed be applied to map the microRNA profiles of defined cell populations. “Our work lifts the possibilities we have to study microRNAs to a whole new level”, says Chiara Alberti, a VBC PhD student who is the first author of the study. “With mime-seq, we have a new entry point for improving our understanding of the way microRNAs steer development and physiology in living animals.” 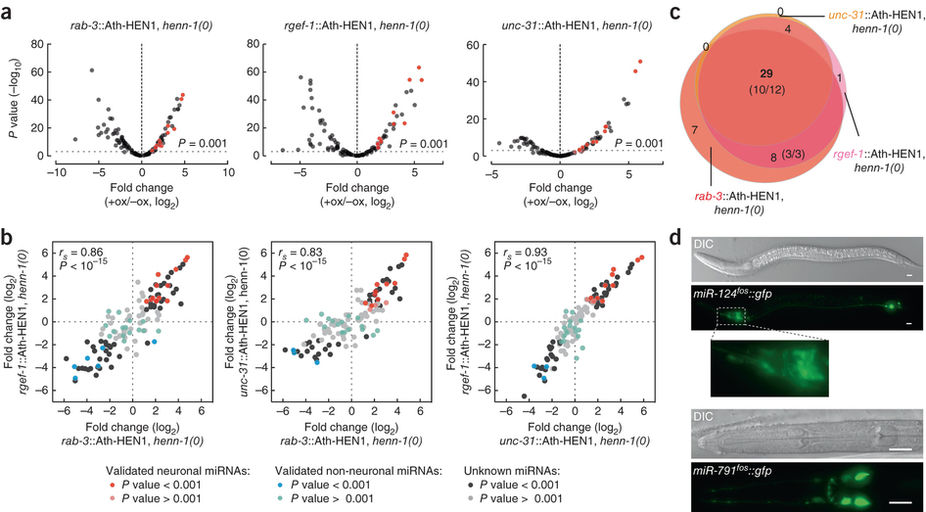 (a) Volcano plots show fold change upon oxidation and associated P values (determined by DESeq2) for each expressed miRNA, obtained from total RNA from L1-stage worms expressing Ath-HEN1 from three independent pan-neuronal drivers. MicroRNAs with validated neuronal expression are indicated in red. (b) Pairwise comparisons of fold change in abundance after oxidation for each expressed mature miRNA in the three independent, pan-neuronal Ath-HEN1 experiments (two biologically independent experiments per driver). Spearman’s correlation coefficients and associated P values are shown. (c) Venn diagram showing the overlap of significantly enriched miRNAs in the three pan-neuronal experiments. The number of miRNAs in each section is shown. The number of transcriptional-reporter-validated miRNAs is indicated in parenthesis. (d) Representative DIC and fluorescence images of C. elegans larvae expressing fosmid reporters for two neuronal miRNAs identified by mime-seq. At least ten animals from each of three independent transgenic lines analyzed per reporter. Scale bars, 10 μm.

As microRNAs contribute crucially to fundamental processes in life such as cell differentiation, “mime-seq” is opening a window on the function of microRNAs and provides a new tool to labs around the world. The technique was published in the journal “Nature Methods”. Its development was a collaborative effort by the labs of Luisa Cochella of the Research Institute of Molecular Pathology (IMP) and Stefan Ameres of the Institute of Molecular Biotechnology (IMBA). The publication is evidence for the strong “RNA community” and the collaborative spirit found at the Vienna BioCenter.