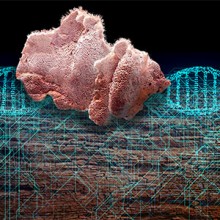 Scientists hope to harness fungi that decompose the most abundant type of biomass in wood, lignocellulose. Lignocellulose could be used to create the building-blocks of polymers for bioproducts. The key to understanding how fungal enzymes break down wood is to examine gene expression patterns. These patterns are typically measured in comparison to so-called ‘housekeeping genes.’ Housekeeping genes are expressed at reliable, steady levels. But conventional housekeeping genes in other fungi are not steadily expressed in wood-decomposing fungi. In a recent study, scientists found better, more steadily expressed housekeeping genes to reliably measure gene expression across the entire genome of these important fungi.

Wood-decomposing fungi efficiently deconstruct plant cell walls made of one of the most abundant carbon sources in nature, lignocellulose. This ability makes these fungi attractive targets to find enzymes that break down wood into the chemical building-blocks for developing bioproducts. Years of study on these fungi for other purposes have yielded a rich set of RNA sequencing data. Scientists are using these data to uncover robust housekeeping genes that will allow them to more accurately and quickly identify the key enzymes that will unlock the potential of these fungi.

Scientists from the University of Minnesota teamed-up with colleagues at Pacific Northwest National Laboratory to mine RNA sequencing data from previous experiments on wood-decomposing fungi. They focused on gene expression response to changing environments such as various sources of carbon and different stages of decomposition in different culture conditions. Starting with the brown rot fungus Rhodonia (Postia) placenta, they used Next Generation High Throughput Sequencing systems at EMSL, the Environmental Molecular Sciences Laboratory, to identify with high accuracy seven genes that promise better internal control genes. Further study using additional species of both white rot and brown rot fungi in solid wood yielded eleven such genes. Together, these genes can provide suitable reference genes for quantifying relative gene expression accurately for DOE missions.