miRNA-Seq and identification of biomarkers for forensically relevant biological fluids

microRNAs (miRNAs) are small non-coding RNAs that regulate cellular processes through modulation of proteins at the translational level. They tend to be highly stable as compared to other RNA species due to their small size and protection by protein and/or lipid matrices. Thus, it is likely that miRNAs, when fully evaluated, will make excellent candidates for body fluid identification. miRNA analysis of body fluids has been the subject of some recent interest in the forensic community.

In this study, researchers from Virginia Commonwealth University isolated small RNAs from individual donations of eight forensically relevant biological fluids (blood, semen, vaginal fluid, menstrual blood, saliva, urine, feces, and perspiration) and subjected to next generation sequencing using the Illumina® Hi-Seq platform. Sequencing reads were aligned and annotated against miRbase release 21, resulting in a list of miRNAs and their relative expression levels for each sample analyzed. Body fluids with high bacterial loads (vaginal fluid, saliva, and feces) yielded relatively low annotated miRNA counts, likely due to oversaturation of small RNAs from the endogenous bacteria. Both body-fluid specific (miRs-200b, 1246, 320c, 10b-5p, 26b, and 891a) and potential normalization miRNAs (let-7g and i) were identified for further analysis as potential body fluid identification tools for each body fluid. 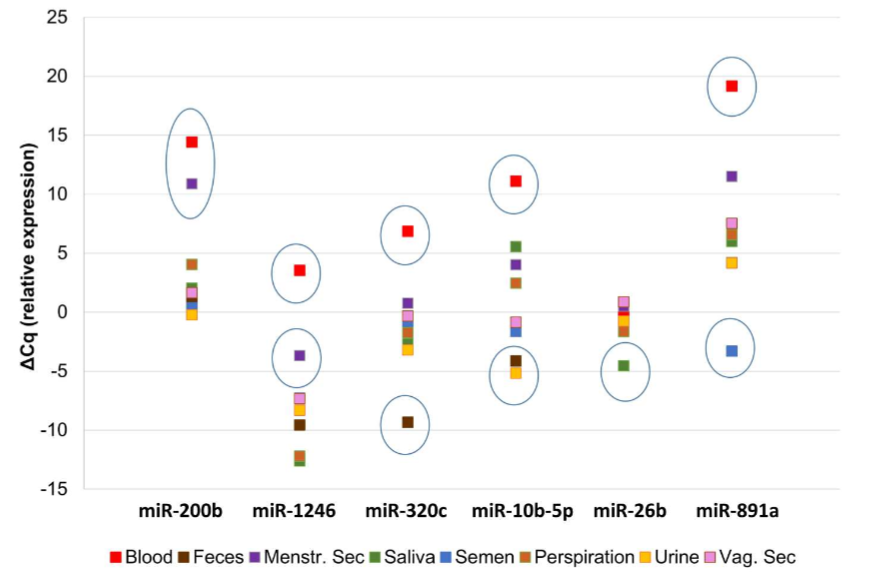 Blood,  feces, menstrual secretions, saliva, semen, and urine can be differentiated based on expression  patterns of these six miRNAs, normalized with let-7g and i as described.  Circled body fluids are  differentiated in expression (n=20 tested population sample for each circled fluid, n=5-20 for the  other 5-6 fluids tested against that miRNA. p<0.05).