The discovery of microRNAs (miRNAs) remains an important problem, particularly given the growth of high-throughput sequencing, cell sorting and single cell biology. While a large number of miRNAs have already been annotated, there may well be large numbers of miRNAs that are expressed in very particular cell types and remain elusive. Sequencing allows us to quickly and accurately identify the expression of known miRNAs from small RNA-Seq data. The biogenesis of miRNAs leads to very specific characteristics observed in their sequences. In brief, miRNAs usually have a well-defined 5′ end and a more flexible 3′ end with the possibility of 3′ tailing events, such as uridylation. Previous approaches to the prediction of novel miRNAs usually involve the analysis of structural features of miRNA precursor hairpin sequences obtained from genome sequence.

Researchers from the EMBL surmised that it may be possible to identify miRNAs by using these biogenesis features observed directly from sequenced reads, solely or in addition to structural analysis from genome data. To this end, they have developed mirnovo, a machine learning based algorithm, which is able to identify known and novel miRNAs in animals and plants directly from small RNA-Seq data, with or without a reference genome. This method performs comparably to existing tools, however is simpler to use with reduced run time. Its performance and accuracy has been tested on multiple datasets, including species with poorly assembled genomes, RNaseIII (Drosha and/or Dicer) deficient samples and single cells (at both embryonic and adult stage). 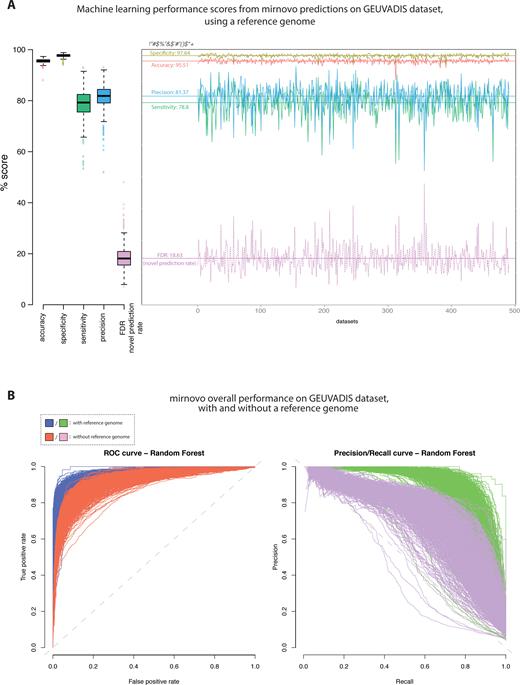 (A) The distribution of accuracy, specificity, sensitivity, precision and FDR (novel prediction rate) scores is shown across all samples of the dataset. (B) ROCR and Precision–Recall (PR) curves from mirnovo prediction performance across all samples from the GEUVADIS dataset, with or without using a reference genome.

Availability – The method is available as both a web-application (http://wwwdev.ebi.ac.uk/enright-dev/mirnovo) and a stand-alone tool (https://github.com/dvitsios/mirnovo).