RNA-seq technology has become an important tool for quantifying the gene and transcript expression in transcriptome study. The two major difficulties for the gene and transcript expression quantification are the read mapping ambiguity and the overdispersion of the read distribution along reference sequence. Many approaches have been proposed to d to account for the overdispersion in the Poisson models.

By checking the similarities among the variation patterns of read counts for individual genes, researchers at the Nanjing University of Aeronautics and Astronautics found that the count variation is exon-specific and has the conserved pattern across the samples for each individual gene. They introduce Gamma-distributed latent variables to model the read sequencing preference for each exon. These variables are embedded to the rate parameter of a Poisson model to account for the overdispersion of read distribution. The model is tractable since the Gamma priors can be integrated out in the maximum likelihood estimation. 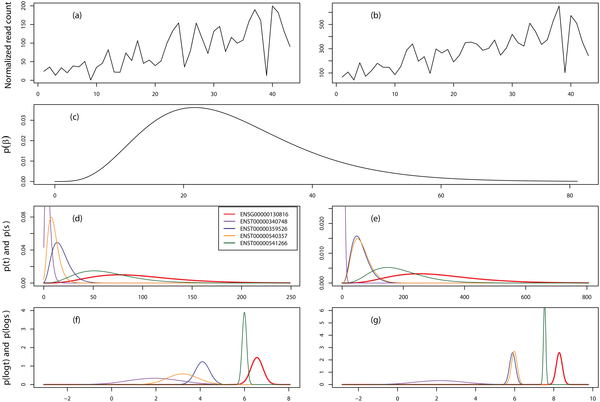 Transcript expression deconvolution by PGseq for gene ENSG00000130816. (a) and (b) show the normalized read counts for samples HBR and UHR, respectively, for each exon. (c) shows the estimated gene-specific read distribution. The 3rd panel shows the obtained NB distributions for both gene and isoforms for the two samples. The last panel presents the approximated Gaussian distributions of logged gene and isoform expression. This gene contains four isoforms and the total normalized read counts for both samples are 601 and 2341, respectively.

The researchers evaluate the proposed approach, PGseq, using four real datasets and one simulated dataset, and compare its performance with other popular methods. Results show that PGseq presents competitive performance compared to other alternatives in terms of accuracy in the gene and transcript expression calculation and in the downstream differential expression analysis. Especially, they show the advantage of this method in the analysis of low expression.

Availability – The software and documentation are freely available online from the website https://github.com/PUGEA/PGSeq.