In a bid to find or refine laboratory research models for cancer that better compare with what happens in living people, Johns Hopkins Medicine scientists report they have developed a new computer-based technique showing that human cancer cells grown in culture dishes are the least genetically similar to their human sources.

The finding, they say, should help focus more resources on cancer research models such as genetically engineered mice and 3D balls of human tissue known as “tumoroids” to better evaluate human cancer biology and treatments, and the genetic errors responsible for cancer growth and progress.

“It may not be a surprise to scientists that cancer cell lines are genetically inferior to other models, but we were surprised that genetically engineered mice and tumoroids performed so very well by comparison,” says Patrick Cahan, Ph.D., associate professor of biomedical engineering at The Johns Hopkins University and the Johns Hopkins University School of Medicine and lead investigator of the new study.

The new technique, dubbed CancerCellNet, uses computer models to compare the RNA sequences of a research model with data from a cancer genome atlas to compare how closely the two sets match up. 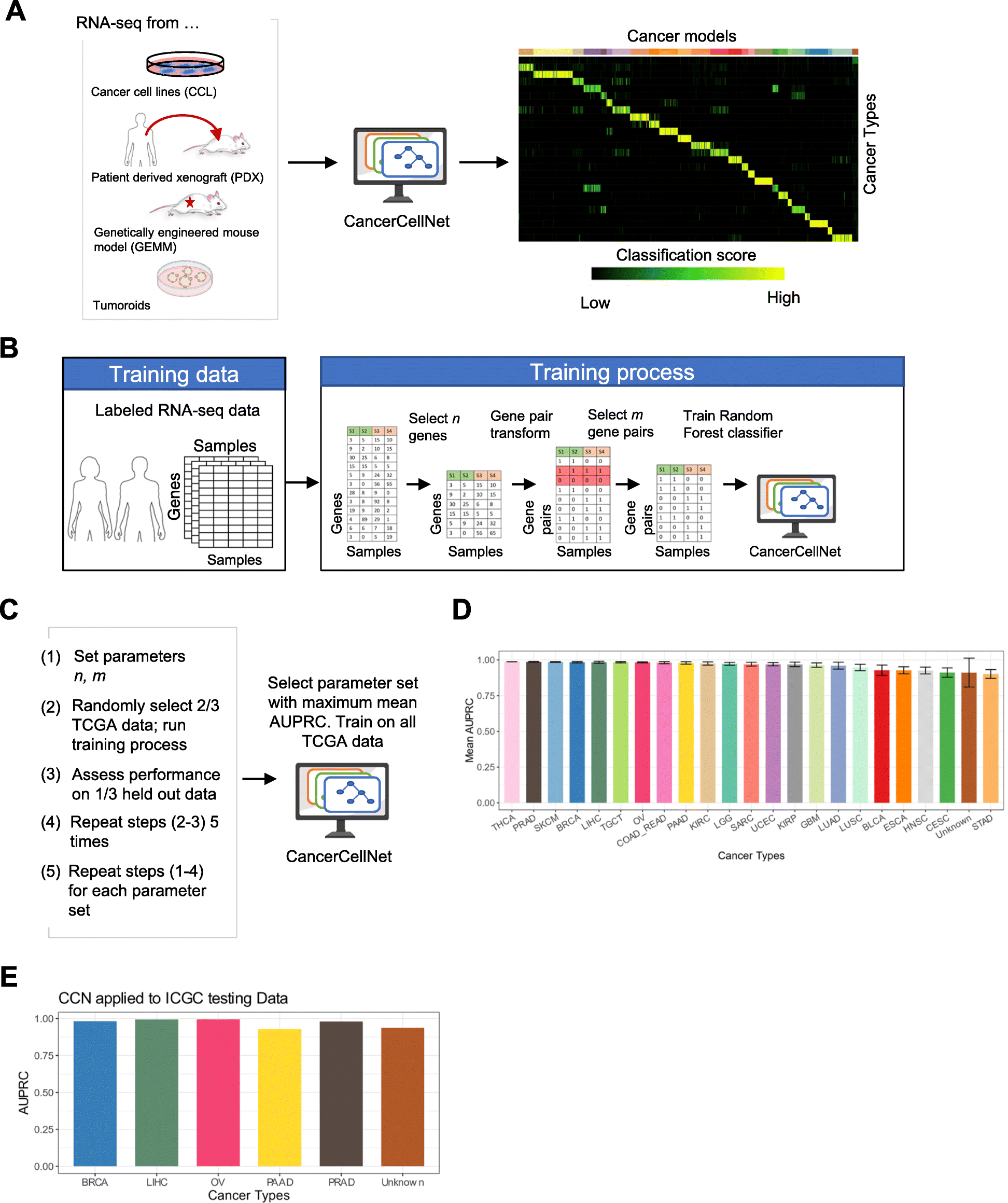 a Schematic of CCN usage. CCN was designed to assess and compare the expression profiles of cancer models such as CCLs, PDXs, GEMMs, and tumoroids with native patient tumors. To use trained classifier, CCN inputs the query samples (e.g. expression profiles from CCLs, PDXs, GEMMs, tumoroids) and generates a classification profile for the query samples. The column names of the classification heatmap represent sample annotation and the row names of the classification heatmap represent different cancer types. Each grid is colored from black to yellow representing the lowest classification score (e.g. 0) to highest classification score (e.g. 1). b Schematic of CCN training process. CCN uses patient tumor expression profiles of 22 different cancer types from TCGA as training data. First, CCN identifies n genes that are upregulated, n that are downregulated, and n that are relatively invariant in each tumor type versus all of the others. Then, CCN performs a pair transform on these genes and subsequently selects the most discriminative set of m gene pairs for each cancer type as features (or predictors) for the random forest classifier. Lastly, CCN trains a multi-class random forest classifier using gene-pair transformed training data. c Parameter optimization strategy. Five cross-validations of each parameter set in which 2/3 of TCGA data was used to train and 1/3 to validate was used to search for the values of n and m that maximized performance of the classifier as measured by area under the precision recall curve (AUPRC). d Mean and standard deviation of classifiers based on 50 cross-validations with the optimal parameter set. e AUPRCs of the final CCN classifier when applied to independent patient tumor data from ICGC

The researchers found that, on average, genetically engineered mice and tumoroids have RNA sequences most closely aligned with the genome atlas baseline data in 4 out of every 5 tumor types they tested, including breast, lung and ovarian cancers.

The investigators say their work adds to evidence that cancer cell lines grown in the laboratory have less parity with their human source because of the complex differences between a human cell’s natural environment and a laboratory growth environment.

“Once you take tumors out of their natural environment, cell lines start to change,” says Cahan.

Scientists worldwide rely on a range of research models to improve their understanding of cancer and other disease biology and develop treatments for conditions. Among the most widely used cancer research models are cell lines created by extracting cells from human tumors and growing them with various nutrients in laboratory flasks.

Researchers also use mice that have been genetically engineered to develop cancer. In other cases, they implant human tumors into mice, a process called xenografting, or use tumoroids.

To evaluate how well any of these research models align with what may be happening in people, scientists often transplant lab-cultured cells or cells from tumoroids or xenografts into mice and see if the cells behave as they should — that is, grow and spread and retain the genetic hallmarks of cancer. However, the Johns Hopkins researchers say this process is expensive, time-consuming and scientifically challenging.

The goal of the new work was to develop a computational approach to evaluating research models in a less cumbersome and accurate way. A report on the work was published April 29 in Genome Medicine, and the researchers have filed for a provisional patent on what they named CancerCellNet.

The new technique is based on genetic information about cellular RNA, a molecular string of chemicals similar to DNA and an intermediate set of instructions cells used to translate DNA into the manufacture of proteins.

“RNA is a pretty good surrogate for cell type and cell identity, which are key to determining whether lab-developed cells resemble their human counterparts,” says Cahan. “RNA expression data is very standardized and available to researchers, and less subject to technical variation that can confound a study’s results.”

First, Cahan and his team had to choose a standard set of data that acted as a baseline to compare the research models. Data from The Cancer Genome Atlas served as the so-called “training” data, which includes RNA expression information of hundreds of patient tumor samples, and their corresponding stage, grade and other tumor information.

They also tested their CancerCellNet tool by applying it to data where the tumor type was already known, such as from the International Human Genome Sequencing Consortium.

Members of the research team combed through The Cancer Genome Atlas data to determine 22 types of tumors to study. They used the genome atlas data as the baseline for comparing RNA expression data from 657 cancer cell lines grown in labs worldwide, some of which were established decades ago, 415 xenografts, 26 genetically engineered mouse models and 131 tumoroids.

The investigators found that, using a 0-1 scoring method, cell lines had, on average, lower scoring alignment to atlas data than tumoroids and xenografts.

Cahan says he and his team will be adding additional RNA sequencing data to improve the reliability of CancerCellNet.

DEAD-Box Helicase 27 Triggers Epithelial to Mesenchymal Transition by Regulating Alternative Splicing of Lipoma-Preferred Partner in Gastric Cancer Metastasis
23 May 2022
Unraveling T Cell Responses for Long Term Protection of SARS-CoV-2 Infection
23 May 2022
<em>Cingulin b</em> Is Required for Zebrafish Lateral Line Development Through Regulation of Mitogen-Activated Protein Kinase and Cellular Senescence Signaling Pathways
23 May 2022
Characterization and role of collagen gene expressing hepatic cells following partial hepatectomy in mice
23 May 2022
Identification by Bioinformatics Analysis of Potential Key Genes Related to the Progression and Prognosis of Gastric Cancer
23 May 2022
A Protocol for the Cryopreservation of Human Intestinal Mucosal Biopsies Compatible With Single-Cell Transcriptomics and <em>Ex Vivo</em> Studies
23 May 2022
Development of a Risk Score Model for Osteosarcoma Based on DNA Methylation-Driven Differentially Expressed Genes
23 May 2022
Crosstalk of Histone and RNA Modifications Identified a Stromal-Activated Subtype with Poor Survival and Resistance to Immunotherapy in Gastric Cancer
23 May 2022
Revisiting the Transcriptome Landscape of Pig Embryo Implantation Site at Single-Cell Resolution
23 May 2022
RNA-seq and Network Analysis Reveal Unique Chemokine Activity Signatures in the Synovial Tissue of Patients With Rheumatoid Arthritis
23 May 2022
Impact of an Immune Modulator Mycobacterium-w on Adaptive Natural Killer Cells and Protection Against COVID-19
23 May 2022
Analysis of single-cell RNA-sequencing data identifies a hypoxic tumor subpopulation associated with poor prognosis in triple-negative breast cancer
23 May 2022
Insight into the potential pathogenesis of human osteoarthritis via single-cell RNA sequencing data on osteoblasts
23 May 2022
Single-Cell Transcriptomics Uncovers Cellular Heterogeneity, Mechanisms, and Therapeutic Targets for Parkinson's Disease
23 May 2022
A N<sup>7</sup>-Methylguanine-Related Gene Signature Applicable for the Prognosis and Microenvironment of Prostate Cancer
23 May 2022
Sorghum root epigenetic landscape during limiting phosphorus conditions
23 May 2022
Reduced subgenomic RNA expression is a molecular indicator of asymptomatic SARS-CoV-2 infection
23 May 2022
Global transcriptomic analysis of ethanol tolerance response in <em>Salmonella</em> Enteritidis
23 May 2022
Comparison of Potato Viromes Between Introduced and Indigenous Varieties
23 May 2022
Cancer-Associated Fibroblasts and Squamous Epithelial Cells Constitute a Unique Microenvironment in a Mouse Model of Inflammation-Induced Colon Cancer
23 May 2022
A Molecular Landscape of Mouse Hippocampal Neuromodulation
23 May 2022
Integrative Analysis of lncRNA-miRNA-mRNA Regulatory Network Reveals the Key lncRNAs Implicated Potentially in the Differentiation of Adipocyte in Goats
23 May 2022
Single-Cell RNA-Seq and Bulk RNA-Seq Reveal Intratumoral Heterogeneity and Tumor Microenvironment Characteristics in Diffuse Large B-Cell Lymphoma
23 May 2022
<em>Glycine max</em> Homologs of <em>DOESN'T MAKE INFECTIONS 1, 2</em>, and <em>3</em> Function to Impair <em>Heterodera glycines</em> Parasitism While Also Regulating Mitogen Activated Protein Kinase Expression
23 May 2022
Transcriptome data for <em>Hevea brasiliensis</em> associated with powdery Mildew infection
23 May 2022
Transcriptome analysis of eutopic endometrial stromal cells in women with adenomyosis by RNA-sequencing
23 May 2022
The heterogeneity of cellular senescence: insights at the single-cell level
22 May 2022
scCODE: an R package for data-specific differentially expressed gene detection on single-cell RNA-sequencing data
22 May 2022
Granulosa cell transcriptomic study reveals the differential regulation of lncRNAs and mRNAs related to follicle development in goat
21 May 2022
Cell function and identity revealed by comparative scRNA-seq analysis in human nasal, bronchial and epididymis epithelia
21 May 2022
Genome-wide identification, characterization and expression analysis of glutaredoxin gene family (Grxs) in Phaseolus vulgaris
21 May 2022
m<sup>6</sup>Am methyltransferase PCIF1 is essential for aggressiveness of gastric cancer cells by inhibiting TM9SF1 mRNA translation
21 May 2022
RNA-seq analysis of extracellular vesicles from hyperphosphatemia-stimulated endothelial cells provides insight into the mechanism underlying vascular calcification
21 May 2022
Study of microRNA expression in Salmonella Typhimurium-infected porcine ileum reveals miR-194a-5p as an important regulator of the TLR4-mediated inflammatory response
21 May 2022
Artificial intelligence and machine learning approaches using gene expression and variant data for personalized medicine
20 May 2022
m6A methylated EphA2 and VEGFA through IGF2BP2/3 regulation promotes vasculogenic mimicry in colorectal cancer via PI3K/AKT and ERK1/2 signaling
20 May 2022
A 3D gene expression atlas of the floral meristem based on spatial reconstruction of single nucleus RNA sequencing data
20 May 2022
Differential gene expression profile of multinodular goiter
20 May 2022
DNA damage promotes HLA class I presentation by stimulating a pioneer round of translation-associated antigen production
20 May 2022
Compatibility rules of human enhancer and promoter sequences
20 May 2022
Physiological and comparative transcriptome analyses reveal the mechanisms underlying waterlogging tolerance in a rapeseed anthocyanin-more mutant
20 May 2022
A systematic evaluation of data processing and problem formulation of CRISPR off-target site prediction
20 May 2022
Transcriptome-wide prediction of prostate cancer gene expression from histopathology images using co-expression based convolutional neural networks
20 May 2022
Transcriptomics and metagenomics of common cutworm (Spodoptera litura) and fall armyworm (Spodoptera frugiperda) demonstrate differences in detoxification and development
20 May 2022
Esrrb is a cell-cycle-dependent associated factor balancing pluripotency and XEN differentiation
20 May 2022
Comparative transcriptomic analysis reveals region-specific expression patterns in different beef cuts
20 May 2022
Single-cell deletion analyses show control of pro-T cell developmental speed and pathways by Tcf7, Spi1, Gata3, Bcl11a, Erg, and Bcl11b
20 May 2022
Relationship between gene expression networks and muscle contractile physiology differences in Anolis lizards
20 May 2022
Noncoding RNA-Associated Competing Endogenous RNA Networks in Doxorubicin-Induced Cardiotoxicity
20 May 2022
Selection of RNA-based evaluation methods for tumor microenvironment by comparing with histochemical and flow cytometric analyses in gastric cancer
20 May 2022