Mount Sinai researchers have identified six genes that activate hundreds of other genes in children experiencing severe allergic reactions to peanuts.  This is the first study in human trials to identify genes driving acute peanut allergic reactions using a double-blind placebo-controlled approach with comprehensive sequencing of genes expressed before, during, and after they ingested peanut.

The study was also the first to study gene expression in children over the course of their allergic reactions, allowing each subject’s reaction to be compared to their own pre-reaction state, rather than to a control group without peanut allergies. This approach allowed the researchers to accurately detect gene expression changes resulting from the reactions.

The results of the study were published online in Nature Communications on Tuesday, December 5.

The standard treatment for individuals with peanut allergy includes avoidance of peanuts and prompt care for the allergic reaction. Immunotherapy has demonstrated progress, but it is not effective for all individuals, carries adverse side effects, and has not been approved by the U.S. Food and Drug Administration.

“This study highlights genes and molecular processes that could be targets for new therapies to treat peanut-allergy reactions and could be important  to understanding how peanut allergy works overall,” said the study’s senior author, Supinda Bunyavanich, MD, MPH, Associate Professor, Pediatrics and Genetics and Genomic Sciences at the  Icahn School of Medicine at Mount Sinai. “We still don’t completely understand everything that happens in the body during peanut-allergy reactions. We can use these genes to direct our studies of peanut allergy and hopefully, predict how strongly someone with peanut allergy will react.”

The research team collected blood samples from 40 peanut-allergic children before, during, and after a randomized, double-blind, placebo-controlled oral food challenge. Subjects ingested incremental amounts of peanut at 20-minute intervals until an allergic reaction occurred or a cumulative dose of 1.044 grams of peanut was ingested. In a similar fashion on a different day, the same subjects ingested incremental doses of placebo oat powder; again, blood samples were drawn before, during, and after the challenge. The team then performed comprehensive RNA sequencing on the blood samples followed by computational data analyses to determine what genes and cells were activated and driving these allergic reactions.

“Other studies have looked at genes expressed in people with food allergies and compared them to people who don’t have food allergies,” said Dr. Bunyavanich. “One of the strengths of our study is that we looked at genes expressed over time in children actively reacting to peanut and followed  that person throughout their reaction, which provided a detailed and comprehensive picture of what’s happening on the genetic and molecular level during a peanut-allergy reaction.” 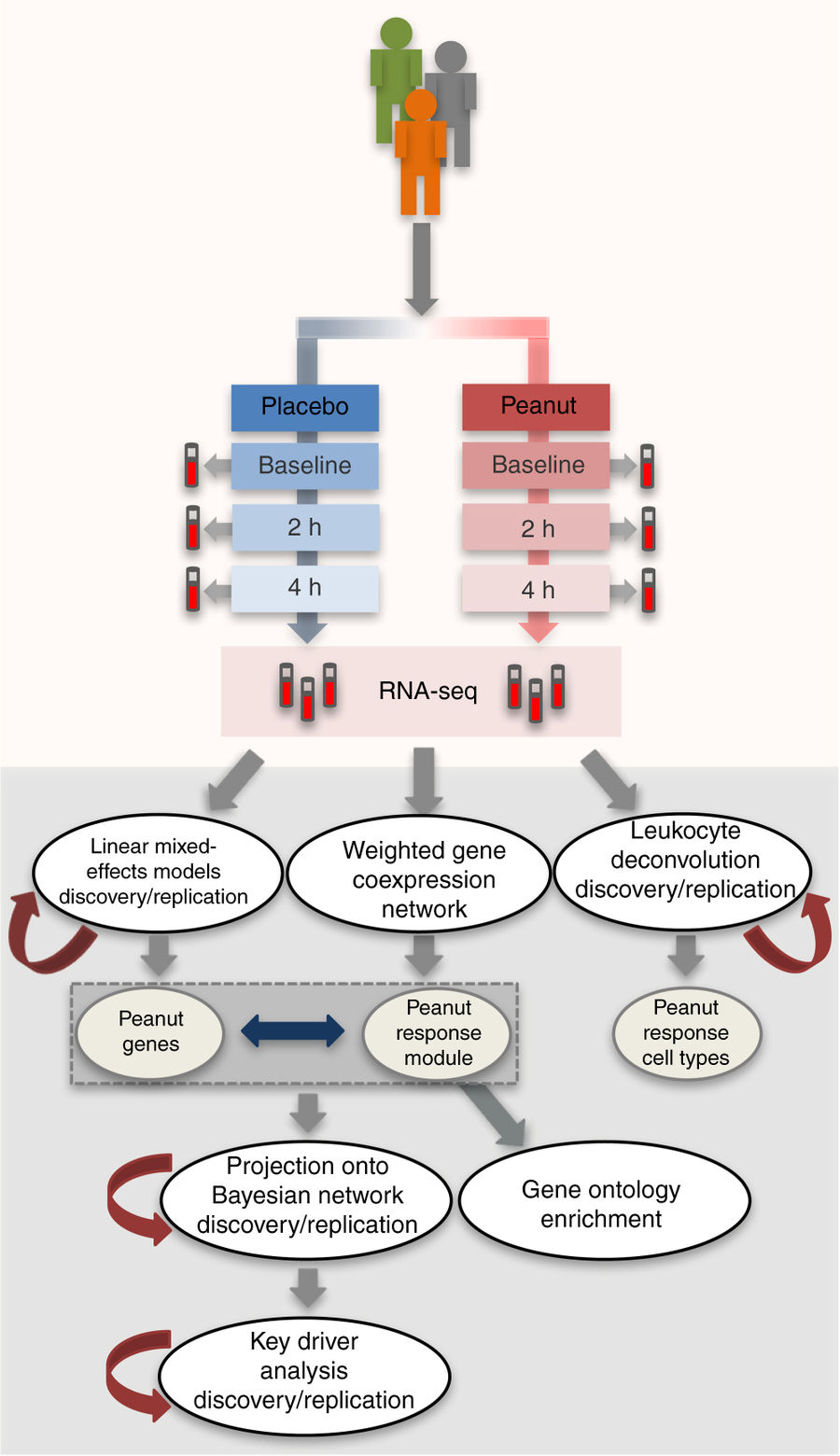 Schematic outlining the clinical phenotyping, sample collections, RNA-sequencing, and analyses conducted. A discovery cohort consisting of 19 peanut allergic subjects, underwent physician-supervised, double-blind oral food challenges to both peanut and placebo, with the order of challenges randomized. For each subject, whole blood samples at baseline, 2 h, and 4 h were each collected during the peanut and placebo challenges. RNA-sequencing was performed on all samples and used for the following analyses outlined in gray: (1) linear mixed-effects model analyses to identify peanut genes (i.e., genes with expression changes in response to peanut, but not placebo, during acute peanut allergic reactions); (2) weighted gene coexpression network analysis (WGCNA) to identify modules of co-expressed genes as broader constructs of biologic function; and (3) leukocyte deconvolution analysis to identify cellular response during the acute peanut allergic reactions. Peanut genes identified by linear mixed-effects model analysis and WGCNA were projected onto a probabilistic causal gene network. Functional biologic processes implicated by WGCNA and peanut genes were investigated further using gene ontology enrichment analysis. Key driver analysis was implemented to identify key causal modulators of the peanut response module enriched for peanut genes. A replication cohort of 21 peanut allergic subjects analogously profiled was used to replicate major findings from this study (steps for which replication analyses were conducted are indicated with maroon arrows)

One of the limitations of the study is that it only focused on peanut allergy. Dr. Bunyavanich and the research team plan to conduct future studies targeting other common allergens, such as milk and egg, to address if their findings may be relevant to other types of food allergy.