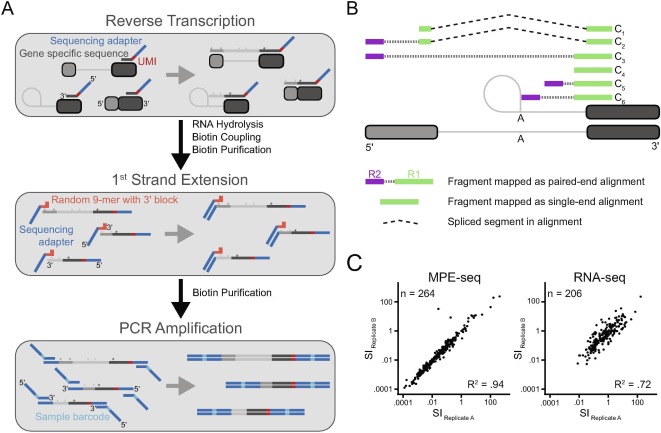 The study of pre-mRNA splicing has been greatly aided by the advent of RNA sequencing (RNA-seq), which enables the genome-wide detection of discrete splice isoforms. Quantification of these splice isoforms requires analysis of splicing informative sequencing reads, those that unambiguously map to a single splice isoform, including exon-intron spanning alignments corresponding to retained introns, as well as exon-exon junction spanning alignments corresponding to either canonically- or alternatively-spliced isoforms. Because most RNA-seq experiments are designed to produce sequencing alignments that uniformly cover the entirety of transcripts, only a comparatively small number of splicing informative alignments are generated for any given splice site, leading to a decreased ability to detect and/or robustly quantify many splice isoforms.

To address this problem, Cornell University researchers have recently described a method termed Multiplexed Primer Extension sequencing, or MPE-seq, which uses pools of reverse transcription primers to target sequencing to user selected loci. By targeting reverse transcription to pre-mRNA splice junctions, this approach enables a dramatic enrichment in the fraction of splicing informative alignments generated per splicing event, yielding an increase in both the precision with which splicing efficiency can be measured, and in the detection of splice isoforms including rare splicing intermediates. Here we provide a brief review of the shortcomings associated with RNA-seq that drove our development of MPE-seq, as well as a detailed protocol for implementation of MPE-seq.