in Commentary, Publications 13 days ago 413 Views

What eventually becomes a graduate student’s PhD thesis work is rarely the project they initially pursued. However, in rare cases like with recent PhD graduate Dr. April Lo from Dr. Alice Berger’s Lab, a conversation about alternative splicing in lung cancer during Lo’s first meeting with Berger at the start of her graduate career sparked the basis for her thesis work and her recently published BMC Cancer paper. Alternative splicing allows for a single gene transcript to encode for multiple proteins by stitching together different combinations of exons, the protein-coding regions. Importantly, aberrant alternative splicing is often observed in cancers, but it is unclear how this process is regulated and how it contributes to driving oncogenic processes.

Lo describes that “alternative RNA splicing is something of a pet interest for us,” as in a previous study, Dr. Berger and collaborators had found “many splicing changes in lung cancer cells which cannot be explained by anything we know about.” This made the Berger team question, “Could signaling by Ras proteins, which are so often mutated in lung tumors, explain some of those splicing changes?” Lo explains.

This hypothesis was strengthened by the team’s findings in a subsequent study, where Lo and the Berger team sought to thoroughly profile the phosphorylation events in human lung epithelial cells expressing oncogenic KRAS and RIT1, another cancer-associated Ras GTPase, to understand the oncogenic signaling events that these proteins are responsible for. Among the many exciting findings made from those experiments, Lo found altered phosphorylation of splicing factors in KRAS mutant cells. In the most recent study, Lo followed up this observation from her previous paper to investigate the role of oncogenic KRAS in eliciting alternative mRNA splicing that might further drive cancer-causing signaling events. Taking a closer look at their previous proteome profiling, Lo et al. found a reduction in phosphorylation of splicing factor SR proteins, which play an important role in splice site selection, in multiple KRAS-mutant variant cell lines. To further understand whether oncogenic KRAS signaling alters alternative splicing, the researchers performed RNA-sequencing to examine different mRNA isoforms. Alternative splicing of cassette exons is tightly regulated by SR proteins, and these events are the most prevalent alternative splicing events in cancers. Here, the Berger team found that almost 1,000 exons were differentially skipped in both KRAS mutant cell types examined, strengthening the potential role for KRAS-mediated alternative splicing. 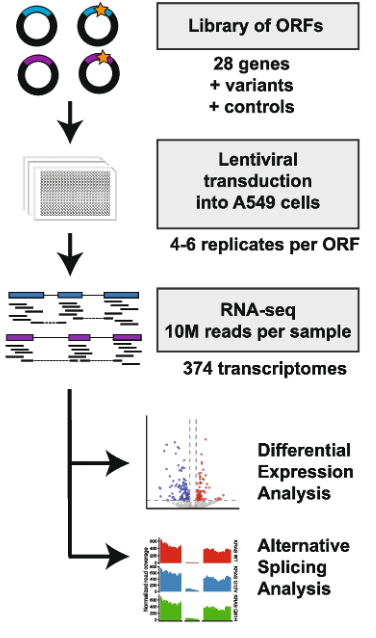 Lo notes that “one gene that was often spliced differently in KRAS mutant cells was MAZ. This was really exciting because others have shown MAZ plays a part in regulating how much KRAS is in the cell, so this could be a way for KRAS to regulate its own activity. Or in the case of lung cancer, not regulate itself!” Lo adds, “We hope that these findings motivate more research and development of treatment strategies that regulate RNA splicing in KRAS mutant lung tumors. Right now, most of these tumors cannot be treated with any targeted therapies and so patients are subjected to chemotherapies with low survival rates. We think drugs that target RNA splicing or splicing patterns could be the key to curing more lung cancer cases.”

Lo explains that cancer-driving proteins like KRAS have “been studied for decades, but their influence over the workings of a cell are so vast that we still have much yet to learn. Here, we took a look at one cellular process, RNA splicing, that KRAS appears to be involved in and found several interesting effects in this space that could make a difference to treatment of KRAS mutant tumors.” She adds, “finding the phosphorylation and RNA splicing events in KRAS mutant cells is only the first step” and states that in future studies, the Berger team hopes to figure out exactly “which mis-spliced genes contribute to tumor formation and growth.” Lo concludes, “Alice called this project my baby because it spanned my time in the Berger lab from the first meeting with Alice to my thesis defense and beyond. But while this project has a special place in my heart, it wouldn’t have been possible without Alice’s great mentorship and the support from many members of the lab. Most notably, Maria McSharry was an invaluable Research Technician, now a graduate student at UC Berkeley, who performed all the sequencing prep so that I could then play with this massive dataset and has always been excited to learn about my analyses and hypotheses.”