Stanford researchers have developed a computational platform for analyzing the molecular behavior of individual cells in tissue samples, opening the door for new discoveries, diagnostics and treatments.

Single-cell RNA sequencing is emerging as a powerful technology in modern medical research, allowing scientists to examine individual cells and their behaviors in diseases like cancer. But the technique, which can’t be applied to the vast majority of preserved tissue samples, is expensive and can’t be done at the scale required to be part of routine clinical treatment.

In an effort to address these shortcomings, researchers at the Stanford University School of Medicine invented a computational technique called CIBERSORTx that can analyze the RNA of individual cells taken from whole-tissue samples or data sets.

A paper describing their method was published online May 6 in Nature Biotechnology. Newman is the lead author of the paper; Ash Alizadeh, MD, PhD, associate professor of medicine, is the senior author.

Framework for in silico cell enumeration and purification 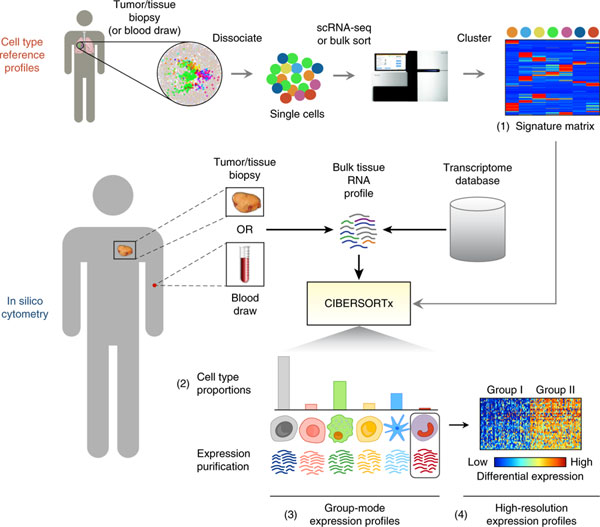 A typical CIBERSORTx workflow involves a serial approach, in which molecular profiles of cell subsets are first obtained from a small collection of tissue samples and then repeatedly used to perform systematic analyses of cellular abundance and gene expression signatures from bulk tissue transcriptomes. This process involves: (1) transcriptome profiling of single cells or sorted cell subpopulations to define a signature matrix consisting of barcode genes that can discriminate each cell subset of interest in a given tissue type; (2) applying the signature matrix to bulk tissue RNA profiles in order to infer cell type proportions; (3) representative cell type expression signatures; and (4) purifying multiple transcriptomes for each cell type from a cohort of related tissue samples. Using metastatic melanomas as an example, Fig. 6 illustrates the application of each step.

Pinpointing cells and their states

CIBERSORTx is an evolutionary leap from the technique the group developed previously, called CIBERSORT. “With the original version of CIBERSORT, we could take a mixture of cells and, by analyzing the frequency with which certain molecules were made, could tell how much of each kind of cell was in the original mix without having to physically sort them,” Alizadeh said.

“We made the analogy that it was like analyzing a fruit smoothie,” Newman said. “You don’t have to see what fruits are going into the smoothie because you can sip it and taste a lot of apple, a little banana and see the red color of some strawberries.”

CIBERSORTx takes that principle much further. The researchers start by doing a single-cell RNA analysis of a small sample of tissue. They might take a cancerous tumor, for instance, separate the cells in the tumor and look closely at the RNA (and therefore the proteins) that each cell makes. From this they produce a “bar code,” a pattern of RNA expression, that identifies not only the kind of cell they are looking at, but also the subtype or mode it’s operating in. For instance, Alizadeh said, the immune cells infiltrating a tumor act differently and produce different RNA and proteins — and therefore a different RNA bar code — than the same kind of immune cells circulating in the blood.

“What CIBERSORTx does is let us not just tell how much apple there is in the smoothie, but how many are Granny Smiths, how many are Red Delicious, how many are still green and how many are bruised,” Alizadeh said. “Similarly, starting with a mix of RNA barcodes from a tumor can give us insights into the mix of cell types and their perturbed cell states in these tumors, and how we might be able to address these defects for cancer therapy.”

Being able to identify not only the types of cells, but also their state or behaviors in particular environments, could lead to dramatic new biological discoveries and provide information that could improve therapies, the scientists said.

A major strength of CIBERSORTx is that it can be used on tissue samples that have been “pickled” in formalin and stored in paraffin, which is true of the vast majority of diagnostic tumor samples. Most of these samples cannot be analyzed through single-cell RNA sequencing because the cell walls are often damaged or the cells can’t be separated from each other. This makes single-cell RNA analysis impractical or impossible for most large studies and clinical trials, where information about how cells are behaving is crucial.

The researchers also tested the tool’s diagnostic power by analyzing melanoma tumors. One of the most effective therapies for metastatic melanoma and some other cancers utilizes drugs that block the activity of proteins called PD-1 and CTLA4 in the T cells that infiltrate and attack the tumors. But these “checkpoint inhibitor” drugs work well in a minority of patients, and there has been no easy way to tell which patients will respond.

One prior hypothesis has been that if a patient has high levels of PD-1 and CTLA4 in the T cells infiltrating their tumor, these drugs are more likely to work, but researchers have had difficulty ascertaining whether this was true. CIBERSORTx allowed the team to explore this question. After training their algorithms on single-cell RNA data from a few melanoma tumors, they analyzed publicly available data sets from previous studies on bulk melanoma tumors and tested fixed samples. They confirmed the hypothesis, finding that high levels of expression of PD-1 and CTLA4 in certain T cells was correlated with lower mortality rates among patients being treated with PD-1-blocking drugs.

CIBERSORTx may also allow the discovery of new cell markers that will provide other pathways for attacking cancer, the researchers said. Using the tool to analyze stored tissues and correlating cell types with clinical outcomes may point to genes and proteins that are important for cancer growth, they said. “It took 30 years to identify PD-1 and CTLA4 as important proteins, but these markers just jump out of the data when we use CIBERSORTx to correlate gene expression of cells in tumors with treatment outcomes,” Alizadeh said.

“We see so many new molecules that could prove interesting,” Newman said. “It’s a treasure trove.”

As with the original tool, the scientists plan to let researchers from around the world use CIBERSORTx algorithms on computers at Stanford through an internet link. Newman and Alizadeh think they will see a lot of online traffic.

“We expect to see smoke coming out of the computer room,” Alizadeh said.

Availability – CIBERSORTx v.1.0 was used to generate the results in this work and is freely available for academic research use at http://cibersortx.stanford.edu.