(PHILADELPHIA) – Since their discovery in the 1950s, transfer RNAs (tRNAs) have been best known for their role in helping the cell make proteins from messenger RNA templates. However, recent studies have led to a previously-unsuspected concept that tRNAs are not always the end product; namely, they further serve as a source of small RNAs. Now researchers have discovered a new species of tRNA-derived small RNAs that are produced only in hormonally-driven breast and prostate cancers, and which contribute to cell proliferation. The results will be published online the week of June 29th in the Proceedings of the National Academy of Sciences (PNAS).

“In early RNA sequencing studies, researchers observed an abundance of tRNA fragments in cellular transcriptome but those fragments had often been disregarded as non-functional degradation products,” says Yohei Kirino, Ph.D., Assistant Professor in the Department of Biochemistry and Molecular Biology and a researcher at the Computational Medicine Center at Thomas Jefferson University. “This research is one of several recent studies that bring to light a new role for tRNAs to produce small functional RNAs, in this case, functional tRNA halves.”

Although other tRNA halves have been described before – specifically those that are produced during a cellular stress response – this discovery represents a new and distinct species of tRNA halves that the authors coined SHOT-RNAs, for sex hormone dependent tRNA-derived RNAs. 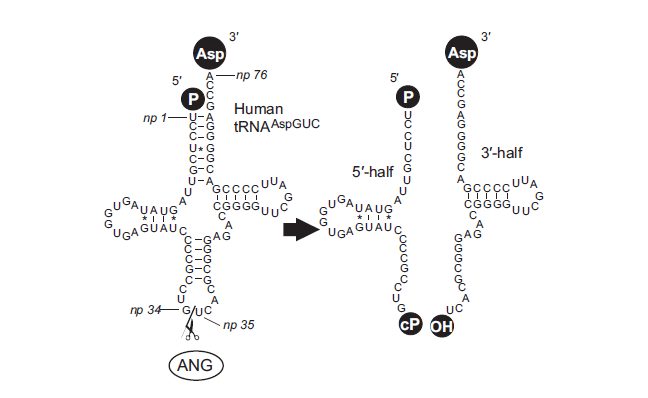 Using a new TaqMan PCR-based technique, the researchers screened a number of cancer cell lines from various tissues, and discovered that tRNA halves were specifically expressed in large quantities in sex hormone-dependent cancers, i.e., estrogen receptor (ER)-positive breast cancer and androgen receptor (AR)-positive prostate cancer that are driven by the hormones estrogen and testosterone. After confirming the dependency of the tRNA halves’ expression on the hormones and their receptors, they coined the new tRNA halves, SHOT-RNAs.

SHOT-RNAs contain a terminal modification which prevents their detection by standard RNA-seq method. “The modification makes SHOT-RNAs invisible in RNA-seq data and this could be the reason why SHOT-RNAs had not been discovered in spite of their abundance and clear expression specificity in hormone-dependent cancers,” says Dr. Kirino.

Dr. Kirino and colleagues created a novel method called cP-RNA-seq to comprehensively sequence SHOT-RNAs and found that only eight tRNA species produce SHOT-RNAs.  They were also able to track the molecule’s function in the cells, and tease apart the other cellular players it interacted with.  They discovered, for example, that SHOT-RNAs are created by an enzyme called Angiogenin whose activity is promoted by sex hormone signaling pathways. They also showed that SHOT-RNAs are involved in spurring cell proliferation.

“The SHOT-RNAs are an exciting development in the tRNA field,” said Isidore Rigoutsos, Ph.D., Director of the Computational Medicine Center at Thomas Jefferson University. “They are also another example of what appear to be regulators whose presence in a given tissue is modulated by a person’s gender. Discovering such regulators is one of the major foci of the Computational Medicine Center.”

In a final experiment, Dr. Kirino and colleagues also examined clinical samples from breast cancer patients and found elevated levels of SHOT-RNAs in patients with ER-positive luminal-type cancers, but not those that were negative for ER expression. The high expression specificity of SHOT-RNAs implies their potential use as a novel biomarker, and the next steps, says Dr. Kirino, are to explore relationships between SHOT-RNA expression and prognostic factors.

In spite of endocrine therapy to suppress hormone receptor activity or hormone exposure, many patients of hormone-dependent cancers encounter de novo or acquired resistance and require more aggressive treatments. Dr. Kirino says that “further studies to understand how SHOT-RNAs promote cell proliferation may lead to the use of SHOT-RNAs as potential target candidates for future therapeutic applications in breast and prostate cancers.”

This study was supported in part by a NIH grant GM106047, a W. M. Keck Foundation grant, institutional funds, a Grant-in-Aid for Scientific Research from the Ministry of Education, Culture, Sports, Science and Technology, Japan #26293304, and a JSPS Postdoctoral Fellowships for Research Abroad.

About Jefferson — Health is all we do.

Our newly formed organization, Jefferson, encompasses Jefferson Health and Thomas Jefferson University, representing our clinical and academic entities.  Together, the people of Jefferson, 19,000 strong, provide the highest-quality, compassionate clinical care for patients, educate the health professionals of tomorrow, and discover new treatments and therapies that will define the future of health care.

Jefferson Health comprises five hospitals, 13 outpatient and urgent care centers, as well as physician practices and everywhere we deliver care throughout the city and suburbs across Philadelphia, Montgomery and Bucks Counties in Pa., and Camden County in New Jersey.  Together, these facilities serve more than 78,000 inpatients, 238,000 emergency patients and 1.7 million outpatient visits annually.  Thomas Jefferson University Hospital is the largest freestanding academic medical center in Philadelphia.  Abington Hospital is the largest community teaching hospital in Montgomery or Bucks counties.  Other hospitals include Jefferson Hospital for Neuroscience in Center City Philadelphia; Methodist Hospital in South Philadelphia; and Abington-Lansdale Hospital in Hatfield Township.

For more information and a complete listing of Jefferson services and locations, visit www.jefferson.edu.