in Commentary, Publications 24 days ago 1,532 Views

New technology can trace which populations of breast cancer cells are responsible for the spread of the disease, and for the first time highlights how the location of cancer cells could be as important as mutations in tumor growth.

The method was created by a team from the Wellcome Sanger Institute, EMBL’s European Bioinformatics Institute (EMBL-EBI), the German Cancer Research Center (Deutsches Krebsforschungszentrum, DKFZ), the Science for Life Laboratory in Sweden, and collaborators. It could be used to help answer some of the big questions in cancer, such as why some cancer cells spread, how treatment resistance is formed, and why some therapies fail.

The new study, published today (9th November 2022) in Nature, shows how it is now possible to map how tumors have developed, combining the cancer cells’ genetic information, the surrounding cell types, and how they interact with their environment over time.

In the future, this approach could be used to see how treatments influence the cancer at not only the genetic level, but also any impact on how the tumor interacts with the immune system and the environment around it.

Breast cancer is one of the most common cancers in the UK, with around 55,500 women and around 370 men being diagnosed every year.

Breast cancer commonly starts when cells start to grow uncontrollably, often due to mutations in the cells. Overtime the tumor becomes a patchwork of cells, called cancer clones, each with different mutations. As they are genetically different, they can have different reactions to treatments. For example, some of these cancer cells could become resistant to treatment, or some could spread around the body.

The mutations that occur will be influenced by what is happening around the cancer, the cells that it is surrounded with, and the individual’s immune system. Therefore, being able to study the environment that a cancer cell is in, what mutations arise, and which cancer cells spread around the body gives a complete view of tumor evolution.

This new technology, created by researchers from the Wellcome Sanger Institute, EMBL-EBI, DKFZ, the Science for Life Laboratory, and collaborators, uses hundreds of thousands of tiny fluorescent molecular probes to interrogate cellular DNA and RNA and scan large pieces of tissue using fluorescence microscopy. It can genetically and physically map out a cancer’s unique set of clones, how their gene expression programs change and show how they interact with their environment.

We have created a system that combines computational and experimental techniques that allows us to map evolutionary cancer lineages in their natural habitat of human tissue. While it has been previously possible to trace the lineage of cancer tumor cells in an experimental setup, this is the first time that multiple lineages were traced in human tissues, giving a complete overview of breast cancer development in the body. Insights generated by our system were impossible to get before, especially at this scale.” – Artem Lomakin, First Author, EMBL’s European Bioinformatics Institute (EMBL-EBI) and the German Cancer Research Center (Deutsches Krebsforschungszentrum, DKFZ) 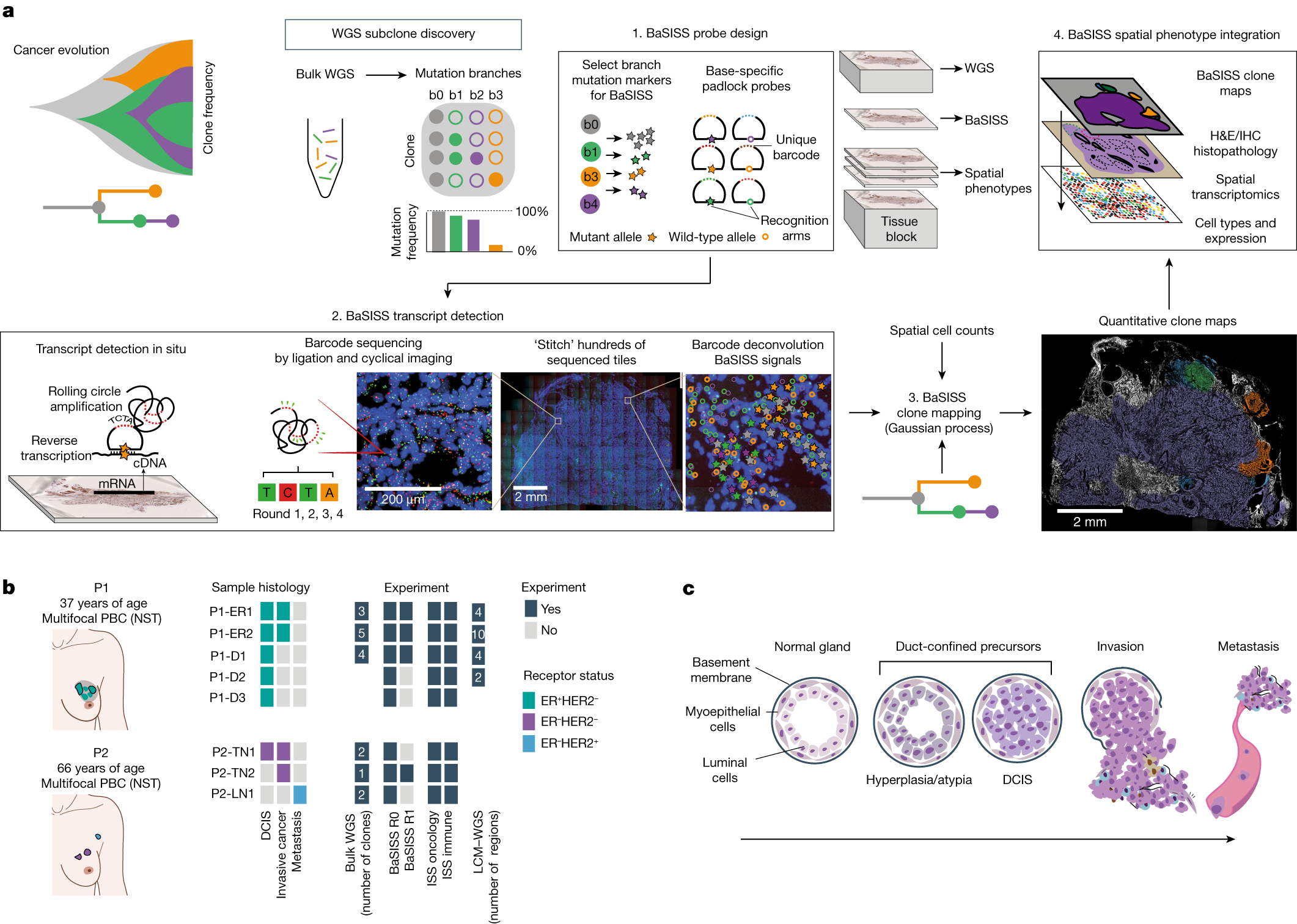 a, Following de novo mutation detection and subclone discovery in WGS data, the BaSISS workflow is performed as follows: (1) bespoke mutation-specific padlock probes are designed. (2) BaSISS transcripts are detected. To achieve this, BaSISS padlock probes hybridize to complementary DNA (cDNA) in situ. By virtue of a highly specific DNA ligase, only completely target-complementary padlock probes are ligated and form closed circles. Ligated probes are amplified through rolling circle amplification and their reader barcodes are detected in tissue space through sequencing by ligation with fluorophore-labelled interrogation probes and cyclical microscopy. (3) Mathematical modelling of BaSISS signals and the genotype of clones is then performed to derive clone maps. (4) Subsequent phenotype and microenvironment characterization of clones is then possible, by integrating clone fields with spatial datasets acquired from serial tissue sections. The BaSISS model and cell typing are described further in Extended Data Figs. 1 and 2. b, The two cases of multifocal primary breast cancer (PBC) used to develop the BaSISS approach. Coloured tiles report the histological features within each sample and the experiments performed. The number of clones identified by WGS and targeted by BaSISS are reported as white numerals. c, The traditional histological model of breast cancer progression. DCIS, ductal carcinoma in situ; H&E, haematoxylin and eosin; LN, lymph node; NST, invasive carcinoma of no special type; TME, tumour microenvironment.

The team found that across multiple stages of breast cancer development there were specific, and often unexpected, patterns of clone growth and that genetic clones behave differently depending on where in the breast they started.

The results also suggest that sometimes it is not only the genetics that influence how cancers grow, but also the location of the tumors. In this case, the genetics can be used as a tool to find out more about what happened in the situation that drove the cancer clones to spread around the body.

Professor Mats Nilsson, co-senior author from the Science for Life Laboratory at Stockholm University, said: “Cancer is caused by genetic mutations in a cell and this research was the first time that we were able to use DNA base specific probes to target dozens of these mutations in a set of cancer cell clones. This innovative technique allowed us to accurately reconstruct the spread of these clones. An important insight from our research is that it may not be the genetic changes alone that are the reason that the cancer cells survive and spread; it could also be where they are. This adds an additional layer of complexity as well as new potential ways to target the disease. It may also offer explanations about why some treatments only work in some individuals, even if they have similar mutations to others, as the tumors are found in different areas of the breast.”

In the future, it could be possible to develop therapies that could prevent or lessen the cancer’s ability to grow and spread, by influencing the environment around the tumor. In addition to this, researchers could use the newly developed tool to test how new treatments affect both the cancer and its interaction with the immune system, giving a complete picture of how therapies work and any possible side effects.

Professor Moritz Gerstung, co-senior author from the German Cancer Research Center (Deutsches Krebsforschungszentrum, DKFZ), said: “Sequencing cancer tumors can give us a good understanding about the genetic diversity in a tumor. But the exciting thing about this technology is that for the first time, we can see how the environment shapes cancer evolution. We were able to see which cancer clones progress to become more aggressive, and which don’t, and this will enable us to get a much better understanding of what the key steps are in tumor growth, and how we can lessen or prevent disease.”

Dr Lucy Yates, co-senior author from the Wellcome Sanger Institute, said: “Our research has created a tool that can trace which breast cancer cells go on to cause tumors in other parts of the body, and can help answer some of the big questions in cancer, such as why some cancer cells spread and some don’t. To fully understand and therefore treat breast cancer, we need to be able to see the entire picture of how the cancer interacts in the body, with the cells around it, and with the immune system. This new technology combines multiple techniques and expertise to do this, bringing together different approaches to give a complete view of cancer that has not been previously possible.”