Therapeutics based on messenger RNA, or mRNA, can potentially treat a wide range of maladies, including cancer, genetic diseases, and as the world has learned in recent years, deadly viruses.

To work, these drugs must be delivered directly to target cells in nanoscale bubbles of fat called lipid nanoparticles, or LNPs — mRNA isn’t much good if doesn’t reach the right cell type.

A team of researchers at the Georgia Institute of Technology and Emory University’s School of Medicine has taken another step toward improving development of these custom-made delivery vehicles, reporting their work June 30 in Nature Nanotechnology. Curtis Dobrowolski and Kalina Paunovska, trainees in the lab of James Dahlman, have developed a system to make pre-clinical nanoparticle studies more predictive. Their discoveries already are influencing the direction of research in this growing, competitive field.

“I’m very excited about this study and anticipate shifting most of our future projects to this methodology,” said Dahlman, associate professor and McCamish Foundation Early Career Professor in the Wallace H. Coulter Department of Biomedical Engineering at Georgia Tech and Emory.

To speed up the process of testing the effectiveness of their LNPs, Dahlman’s team has developed a technique called DNA barcoding. In this process, researchers insert a snippet of DNA that corresponds to a given LNP. The LNPs are then injected and cells are subsequently examined for the presence of the “barcodes” using genetic sequencing. The system identifies which barcodes have reached which specific targets, highlighting the most promising nanoparticles. Since many DNA sequences can be read at once, the barcoding process allows many experiments to be performed simultaneously, thereby accelerating the discovery of effective lipid nanoparticle carriers.

DNA barcoding has significantly improved the nanoparticle pre-clinical screening process. But there is still a significant barrier impacting drug delivery. Because of their diversity, cells are kind of like moving targets. Dahlman noted that cells previously thought to be homogeneous are composed of distinct and varied cell subsets. His team surmised that this chemical and genetic heterogeneity has a powerful influence on how well LNPs can deliver mRNA therapies into the cells.

“Cells don’t have just one protein that defines them — they’re complicated,” Dahlman said. “They can be defined by a combination of things, and if we’re being honest, they are best defined using by all the genes they do, or do not, express.”

To test their hypothesis, the researchers developed a new tool to measure all of these things at once. Their multiomic nanoparticle delivery system is called single-cell nanoparticle targeting-sequencing, or SENT-seq. 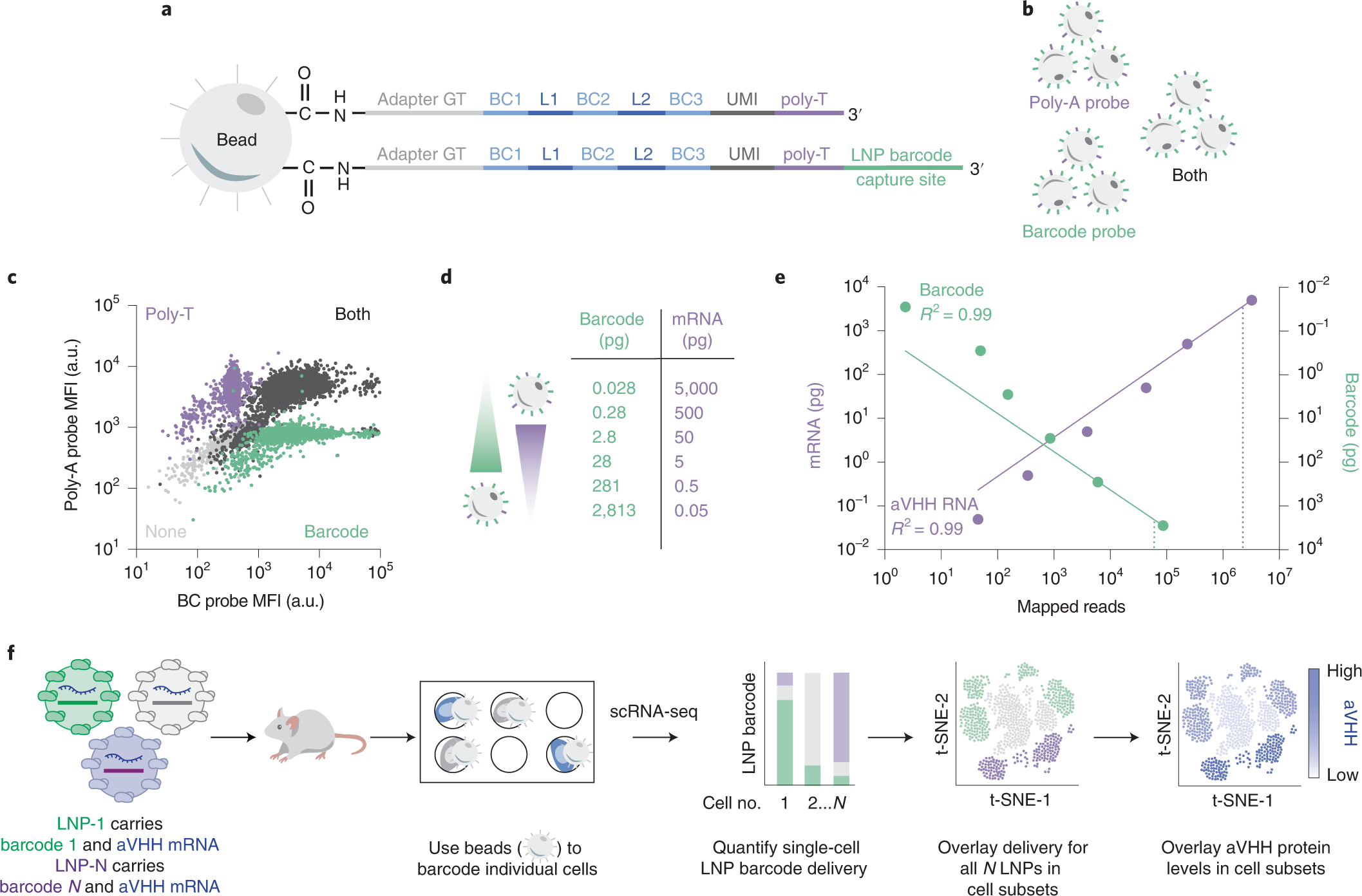 a, The sensitivity of the DNA barcode readouts relative to the biological (that is, mRNA and protein) readouts was controlled by the ratio of two orthogonal capture sequences: the barcode capture sequence and poly-T, which captured mRNA and poly-A tagged cell hash oligonucleotide antibodies. b,c, Beads carrying the barcode capture sequences and poly-T were mixed with the complementary fluorescent barcode probe, fluorescent poly-A probe, both or, as a negative control, none (b), and the MFI of each coupling was quantified (c). d,e, Beads carrying both capture sequences were mixed with varying amounts of LNP barcode or mRNA (d) to generate sequencing read standard curves (e). f, After formulating and injecting N chemically distinct LNPs carrying mRNA and DNA barcodes, tissues were isolated and digested into single-cell suspensions. The workflow shows delivery mediated by all N LNPs, subsequent mRNA-mediated protein production and transcriptome quantification in single cells using next-generation sequencing. BC, barcode; L, linker; UMI, unique molecular identifier.

Using SENT-seq, the researchers were able to quantify how LNPs deliver DNA barcodes and mRNA into cells, the subsequent protein production facilitated by the mRNA drug, as well as the identity of the cell, in thousands of individual cells.

This multiomics approach could represent an important leap forward for high-throughput LNP discovery. The SENT-seq technique allowed the team to identify cell subtypes that demonstrate particularly high or low nanoparticle uptake, and the genes associated with those subtypes.

So, in addition to testing the efficacy of a drug and how certain cell subtypes react to nanoparticles, they’re identifying which genes are involved in the successful uptake of LNPs. And they’re doing it all at once.

“The data suggests that these different cell subsets have distinct responses to nanoparticles that influence how well an mRNA therapy works,” Dahlman said. “There’s still a lot of work to be done, but we think the ability to simultaneously read out high-throughput nanoparticle delivery and the cellular response to nanoparticles will lead to better mRNA therapies.”

Co-lead author Paunovska said that she and Dobrowolski came up with the idea for the SENT-seq system, “organically, after two months of working together.”

Dahlman added: “I’m proud of the work that Curtis, Kalina, and the team did in the lab. I think this is the beginning of an extremely interesting phase in our work.”