New research led by Holger Heyn at the Centro Nacional de Análisis Genómico of the Centre for Genomic Regulation (CNAG-CRG), presents a sophisticated computational framework to analyze single-cell gene expression levels, scalable to process millions of individual cells. The work, published in the current issue of the scientific journal Genome Research, shows for the first time a tool capable of analyzing such large single-cell RNAseq dataset. This dramatically extends the limits of single-cell genome research.

All the cells in a human body share the same genome but each cell has the potential to become specific in a tissue or organ due to gene expression. Scientists worldwide are looking at what differentiates one cell from another. One of the current challenges of genome research is to analyze many individual cells in order to find and to identify those differences. The analysis of individual cell using single-cell RNA sequencing has been crucial to face this challenge and revolutionized our understanding of the complexity of tissues, organs and organisms. Looking at gene expression of one cell at a time, scientists are now able to describe a sample’s heterogeneity at unprecedented resolution and without prior knowledge of its composition.

Accordingly, large-scale single-cell projects led to the identification of previously unknown cell types and to the drawing of comprehensive cellular maps of organisms.  Within the framework of the Human Cell Atlas project, researchers aim at creating an atlas of all cell types that make up a human body. However, such studies create massive amounts of sequencing data and analyzing large datasets are a major challenge.

A group of scientists of the CNAG-CRG, in collaboration with researchers from theUniversity Pompeu Fabra (UPF) and the Spanish Biomedical Research Consortium on Rare Diseases (CIBERER), has now developed an efficient computational framework that enabled processing, analysis and interpretation of such big-scale single-cell experiments. The group illustrated the power of their strategy by analyzing one of the largest single-cell studies with 1.3 million individual cells of the developing mouse brain.

“BigSCale is extremely powerful in identifying cell type specific genes, which greatly helps in the downstream interpretation of experiments” says Holger Heyn, CNAG-CRG team leader and senior author of the study. The novelty of the analytic tool named “BigSCale” lies in a numerical model that sensitively determines differences between single cells. Having charted how individual cells differ from each other, they can be grouped together into populations of cells to describe the cellular complexity of a given tissue. As virtually all tissues are composed of different cell types and subtypes, such an analysis can guide an unbiased in-depth characterization without initial hypotheses. Differentially expressed marker genes between subpopulation help the researcher to link cells to prior knowledge about the tissue anatomy or to describe the functions of newly discovered cell types. 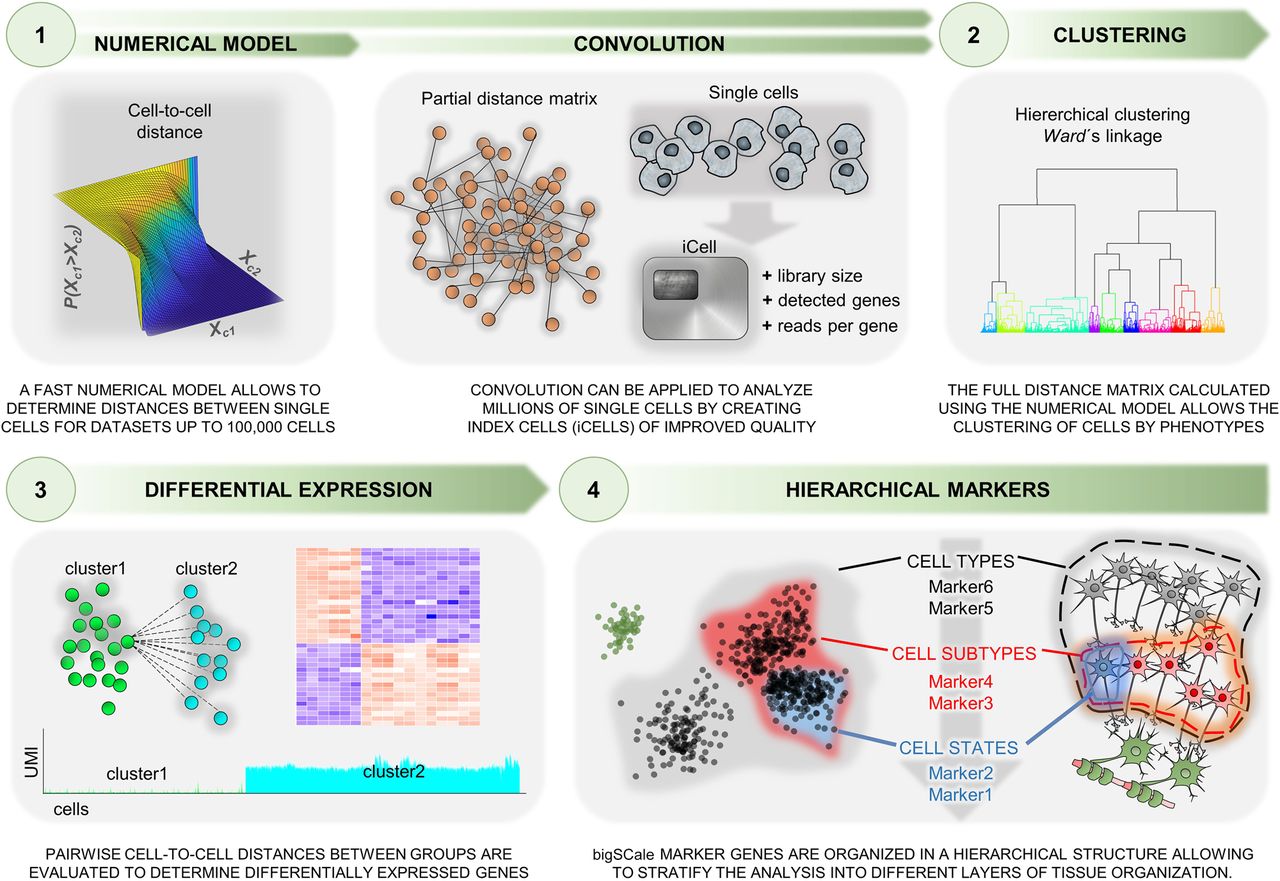 In addition, the tool was designed to tackle future challenges of large datasets. “The costs to derive single-cell profiles are decreasing and we are seeing studies of increasing cell numbers” adds Dr. Heyn. In this regard, a module in the BigSCale workflow enables the analysis of millions of cells through a directed convolution strategy. Here, single-cell transcriptomes from similar cells are merged into index cells, which greatly reduces the amount of data to be processed.

With the new tool in hand the group analyzed one of the largest single-cell gene expression dataset of 1.3 million cells, a resource publically available from 10x Genomics. “BigSCale allowed us to look deep into the developmental processes of the mouse brain and to characterize even rare neuronal cell types” commented Giovanni Iacono, the first author of the work. Specifically, the high number of cells enabled the group to zoom into a small transient cell population called Cajal-Retzius cells and to describe major substructures related to distinct differentiation stages, spatial organization and cellular function. “The BigSCale framework provides a powerful solution for virtually any species and is even applicable outside the RNA sequencing context” explains Dr. Heyn and adds “We expect it to contribute to the interpretation of large-scale studies, such as the Human Cell Atlas project”.