Bioengineers at the University of California San Diego have developed a new tool to identify interactions between RNA and DNA molecules. The tool, called MARGI (Mapping RNA Genome Interactions), is the first technology that’s capable of providing a full account of all the RNA molecules that interact with a segment of DNA, as well as the locations of all these interactions — in just a single experiment.

“Most of the human genome sequence is now known, but we still don’t know what most of these sequences mean,” said Sheng Zhong, bioengineering professor at the UC San Diego Jacobs School of Engineering and the study’s lead author. “To better understand the functions of the genome, it would be useful to have the entire catalog of all the RNA molecules that interact with DNA, and what sequences they interact with. We’ve developed a tool that can give us that information.”

Zhong and his team published their findings in the Feb. issue of Current Biology.

“It could take years to analyze all these interactions,” said Tri Nguyen, a bioengineering Ph.D. student at UC San Diego and a co-first author of the study.

Using MARGI, an entire set of RNA-DNA interactions could be analyzed in a single experiment that takes one to two weeks. 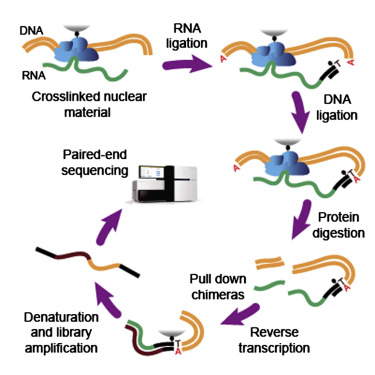 The MARGI technique starts out with a mixture containing DNA that’s been cut into short pieces and RNA. In this mixture, a subset of RNA molecules are interacting with particular DNA pieces. A specially designed linker is then added to connect the interacting RNA-DNA pairs. Linked RNA-DNA pairs are selectively fished out, then converted into chimeric sequences that can all be read at once using high-throughput sequencing.

Zhong and his team tested the method’s accuracy by seeing if it produced false positive results. First, the researchers mixed RNA and DNA from both fruit fly and human cells, creating both “true” RNA-DNA pairs, meaning they’re either fully human or fully fruit fly, and “false” RNA-DNA pairs, meaning they’re half human and half fruit fly — these are the ones that shouldn’t be detected. The team then screened the entire mixture using MARGI. The method detected a large set of true RNA-DNA interactions, but it also detected approximately 2 percent of the false ones.

“This method is not perfect, but it’s an important step toward creating a full functional annotation of the genome,” said co-first author Bharat Sridhar, a visiting bioengineering researcher in Zhong’s group.