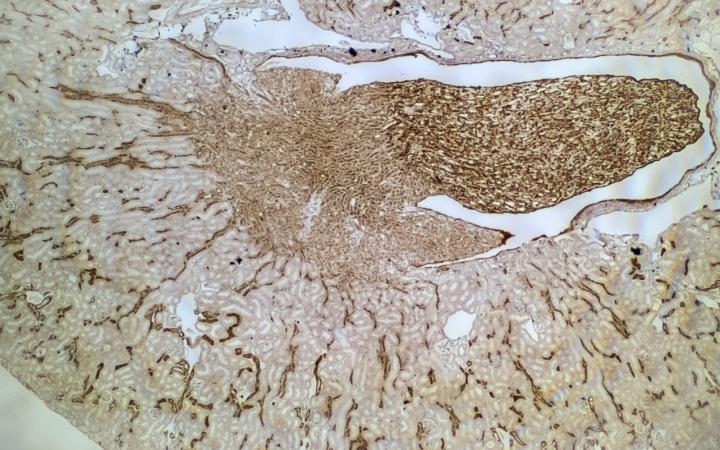 The messenger RNA of a gene is stained brown. The more intense the staining, the stronger the gene expression. This illustrates the spatially heterogeneous expression of genes in the kidney.

By analyzing the gene expression of single cells, algorithms are able to not only reconstruct their original location in the tissue, but also to determine details about their function. Teams led by Kai Schmidt-Ott and Nikolaus Rajewsky have published their findings in JASN, using the kidney as an example.

To find out exactly what happens when in a particular cell, scientists look at its transcriptome – the totality of all genes that are expressed and transcribed into RNA at a specific point in time. Today, single-cell RNA sequencing allows the expression profiles of many thousands of cells to be analyzed simultaneously. But this method requires the cells to first be detached from their cell aggregate, which causes information on the cell’s original location in the tissue to be lost.

Nevertheless, gene expression enables this information to be reconstructed bioinformatically.

“We wanted to know whether, in addition to providing a reconstruction of the cells’ spatial arrangement, algorithms could also be used to gain functional information from single-cell sequencing – for example, about the environmental conditions of kidney cells,” says Dr. Christian Hinze from Charite – Universitaetsmedizin Berlin and the Molecular and Translational Kidney Research Lab at the Max Delbrueck Center for Molecular Medicine in the Helmholtz Association (MDC). He is the first author of the study, which has now been published in the Journal of the American Society of Nephrology (JASN).

Spatially speaking, the kidneys of mammals are very heterogeneous. The two bean-shaped organs consist of a renal cortex and an outer and inner renal medulla. The inner renal medulla is where highly concentrated urine forms after undergoing various filtering processes, and is then excreted via the ureter and bladder.

“Over 15 different cell types are found in a mouse kidney, for example – and some are present in all three kidney regions,” says Hinze.

Think it sounds like an impossible puzzle? Actually, it’s not. Because the microenvironment in which a cell lives is also reflected in its gene expression.

Back in 2019, the team led by Professor Nikolaus Rajewsky, Scientific Director of the MDC’s Berlin Institute for Medical Systems Biology (BIMSB) and one of the current study’s last authors, developed the program NovoSpaRc, which allows the spatial arrangement of cells within an organ to be reconstructed based on gene expression. In initial studies, the researchers found that cells that are arranged close to each other also resemble one another in terms of the activity of certain genes.

“This is because they have to function in the same environment,” explains Hinze. “In the inner renal medulla, for example, conditions are much more severe than in the renal cortex. This is because the osmolality of the environment – i.e., the concentration of dissolved substances in the cell’s surroundings – increases drastically from the outside to the inside of the organ.”

An algorithm solves the 3D puzzle

For their current study, the researchers concentrated primarily on a specific cell type in the kidney known as principal cells. These cells play an important role in the reabsorption of blood salts and water and are distributed throughout the entire organ. Thanks to the particular gene expression of this cell type, they were able to extract these cells from the single-cell data of mouse kidneys. They then subjected the cells to the NovoSpaRc algorithm, which organized the expression data by comparing more than 800 selected genes for similarities.

“NovoSpaRc works like someone doing a jigsaw puzzle,” explains bioinformatician Dr. Nikos Karaiskos from the Rajewsky Lab. “It tries to bring the different parts, which are the cells, together in such a way that the end result makes sense.” Karaiskos is also co-developer of NovoSpaRc and leading the DFG-funded “Unbiased Single-Cell Spatial Transcriptomics” project.

And the algorithm succeeded in completing the puzzle.

“The gene expression analysis confirmed that osmolality in the tissue greatly increases along the axis from the renal cortex to the inner medulla,” says Hinze. “At higher salt concentrations, the cell switches on certain protective genes so that it can survive in this environment.”

The researchers verified their results by carrying out comparative tests on tissue from genetically modified mice, in which the normal salt gradient had been disrupted.

An atlas of gene expression in the kidney

So, to what extent does spatial single-cell analysis actually advance kidney research?

“We are now able to more accurately predict the spatial gene expression in the kidney, and thus also to make deductions about functions or malfunctions in certain regions of the kidney,” explains Professor Kai Schmidt-Ott, a nephrologist at the MDC and Charite and co-last author of the study. “We were already able to take a first step and create a high-resolution spatial atlas of the gene expression of healthy mouse kidneys, which we are now making available online to the scientific community.”

Previous data analyses are limited to healthy and genetically modified kidneys from animal models. Now, the researchers want to turn their attention to sick kidneys.

“We believe that the new methods can also give us a better understanding of the regional molecular processes in kidney disease,” says Schmidt-Ott.

Combining single-cell RNA sequencing with bioinformatic tissue reconstruction has a number of benefits. For one, several experiments are usually necessary to study different regions of an organ.

“Now, we can simply cut up the entire kidney, sequence it, and determine all sorts of information from the transcriptomes – which saves a lot of time and money on research,” Hinze emphasizes.

It can be used to investigate practically everything that is reflected in the gene expression of a cell – complete with spatial resolution. This includes the oxygen or nutrient supply of the tissue, or, as is the case here, the osmolality. What is particularly exciting, however, is that existing archived data sets can be used to answer new research questions – even if samples of the corresponding cells have long since ceased to exist.

And one last benefit: It takes practically no time for the expression data puzzle to be completed.

“In one minute, the algorithm scans the data of a couple of thousand cells,” says Karaiskos. “And for a full reconstruction of the small mouse kidney, it only needed a few seconds.”