A number of long noncoding RNAs (lncRNAs) have been reported to regulate transcription via recruitment of chromatin modifiers or bridging distal enhancer elements to gene promoters. However, the generality of these modes of regulation and the mechanisms of chromatin attachment for thousands of unstudied human lncRNAs remain unclear.

To address these questions, researchers from the University of Chicago performed stringent nuclear fractionation coupled to RNA sequencing. They provide genome-wide identification of human chromatin-associated lncRNAs and demonstrate tethering of RNA to chromatin by RNAPII is a pervasive mechanism of attachment. They also uncovered thousands of chromatin-enriched RNAs (cheRNAs) that share molecular properties with known lncRNAs. Although distinct from eRNAs derived from active prototypical enhancers, the production of cheRNAs is strongly correlated with the expression of neighboring protein-coding genes. This work provides an updated framework for nuclear RNA organization that includes a large chromatin-associated transcript population correlated with active genes and may prove useful in de novo enhancer annotation. 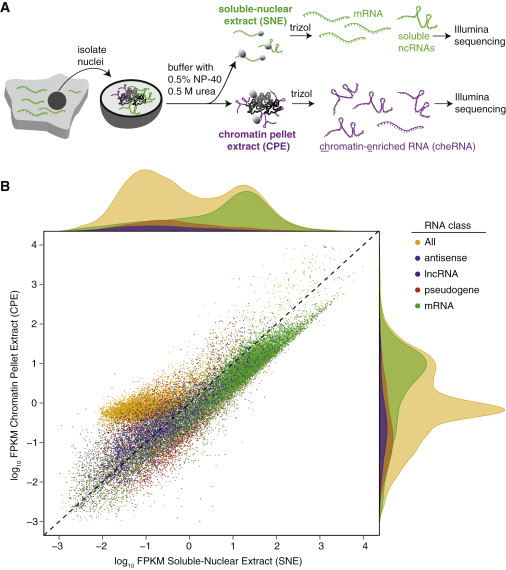 Nuclear Fractionation Isolates Chromatin-Associated RNA, which Includes over Half of Annotated lncRNAs

(A) Depiction of the nuclear fractionation procedure adapted from Wuarin and Schibler (1994)). Purified nuclei from HEK293 cells were extracted in triplicate with a forcing urea/detergent buffer to yield a soluble nuclear extract (SNE) and chromatin pellet extract (CPE), and then both pools were sequenced.

(B) Scatterplot of relative RNA abundance in each of the two fractions (y axis CPE, x axis SNE) presented on a log10 FPKM scale with densities for each category plotted as curves along each axis, and a slope of 1 indicated by the dashed line.