from The University of Delaware by Adam Thomas

3 p.m., May 20, 2014–Leaders in research on microRNAs, University of Delaware professors Blake C. Meyers and Pamela J. Green have an ongoing and longstanding collaboration that recently resulted in the publication of a landmark paper. 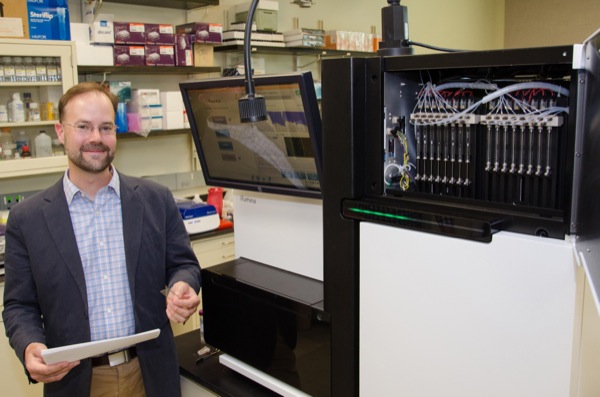 Published in the April 23 edition of the international scientific journal Nature Communications, the paper — titled “Sample Sequencing of Vascular Plants Demonstrates Widespread Conservation and Divergence of microRNAs” — is the 34th that Meyers and Green have co-authored.

Emanuele De Paoli, a former lead postdoctoral researcher on the project from Green’s laboratory, also contributed to the paper.

The paper also had an international element, with the UD researchers working with a team from Mexico, led by Stefan de Folter, professor at the Laboratorio Nacional de Genómica para la Biodiversidad (LANGEBIO) in Irapuato.

Meyers said the work described in the new Nature Communications paper stems from a 2006 National Science Foundation (NSF) grant that the researchers received to develop resources to do comparative analysis in plants.

That award was received during the research group’s earliest days of “next-generation” RNA sequencing, when the technology for sequencing was relatively primitive. During the start of the project, the technologies took several major advances, culminating with the methods essentially still in use today. The project was one of the first to use the advanced methods for small RNA analysis.

“With comparative analysis in plants, the aim is really to explore evolution and genome diversity because there is tremendous diversity in the plant kingdom,” said Meyers. “As humans, we utilize a wide range of plants — from pine trees, which are ancient plants, to more recently developed lineages like corn, a grass, to soybean, a dicot which is quite different from corn. There is a lot of diversity in the important plant species, and a good understanding of the basis for this diversity can help us improve plants for agriculture.”

The aim of the project was to develop data sets of small RNAs from a diverse set of plants, building on the two groups’ expertise in small RNA biology. The project mainly focused on plants of economic importance with the aim that the data sets would be a resource for further exploration to characterize different subsets of important small RNAs within the data, particularly microRNAs.

“MicroRNAs are one very important endogenous set of regulatory RNAs. These molecules regulate gene expression, with roles in numerous cellular pathways, so there’s been a lot of interest in those microRNAs,” said Meyers. “Many microRNAs are conserved across plant species, so you can recognize them by their high degree of sequence similarity, whether you’re looking at Arabidopsis, a model for plants, or soybean, or maize. Other microRNAs are less conserved or even species-specific; they might only be present in both Arabidopsis and soybean but absent in the grasses. What we aimed to do was to explore this diversity.”

To explore the diversity, the group had to secure a diverse set of tissue samples, relying on research groups and botanists from across the country, with some samples sent from overseas. Green, who is also a member of the School of Marine Science and Policy in the College of Earth, Ocean, and Environment at UD, prompted the inclusion of an aquatic marine plant and a multicellular alga.

For most of the 34 species, they created three libraries representing the leaves, the flowers, and a third tissue sample, which was typically the most agriculturally important for the particular plant, in some cases, the fruit.

The tissues were then sent to Illumina in Hayward, California, for sequencing, as at that time, the sequencing technology could only be performed at the company. When the Meyers and Green laboratories received the data, they set up a website to publish it as a resource for other plant biologists. The website, smallRNA.udel.edu, has had more than 10,000 visitors from all over the world in the six years that it has been active.

De Paoli said, “The small RNA database generated in this project has quickly become a tremendous source of biological information that we leveraged in several fruitful collaborations. This final achievement comes after a series of publications where our small RNA dataset proved very useful for the characterization of plant genomes and relevant biological phenomena.”

With the data back and posted to the website, the group — with De Paoli serving as the lead postdoctoral researcher in the lab — started analyzing the data to understand the biology behind it.

The data and the methods developed in the process of handling the samples led to a number of other publications by both the Meyers and Green labs, and by other research groups that utilized parts of the data freely available on the project website. But as the University of Delaware group was finishing their comprehensive manuscript on the data, they were contacted by a group in Mexico that had found the website and the data.

The Mexican researchers had analyzed the data and developed a story of their own that was similar to the one being worked on by Meyers, Green and De Paoli.

Meyers said that what unfolded was “an agreement to work together to combine our efforts because each group looked at the data in different ways. Plus, it didn’t make sense to compete; instead, it seemed like a good opportunity to take advantage of expertise and motivation on both sides, and so we ended up joining forces to develop this joint publication.”

Green explained, “By that time, there was another international component because Emanuele De Paoli had returned to Italy and joined the faculty at the University of Udine.”

The result is a paper that, according to the abstract, reports a comprehensive atlas of small RNA and microRNAs from three species of algae and 31 representative species across vascular plants.

By sequencing and quantifying small RNAs from 99 different tissues or treatments across species, the collaborative group compiled a data set of over 132 million distinct sequences. They then identified the microRNA sequences present in the libraries, and inferred the evolutionary history of plant microRNAs from those data.

The result is a study that provides new insights on plant small RNAs and microRNAs and serves as a foundation for future studies.

Meyers was able to visit LANGEBIO in Mexico earlier this month, where he met the co-authors for the first time, and he spoke about his laboratory’s recent work on other types of small RNAs.