Increasingly, biologists have come to realize that RNA is not merely a transitional state between DNA and proteins but plays a major role in determining whether and how genes are turned into a protein product. Gaining a deeper understanding of RNA regulation can help scientists shed light on diseases that arise when this function goes awry.

Biologists at the University of Pennsylvania and colleagues have teamed up to offer a new method for elucidating RNA regulation. They have provided a means of efficiently obtaining an entire “footprint” of interactions between RNA and the proteins that bind to RNA molecules.

Their results have already identified a number of genetic mutations of potential significance in physiological processes that lie within RBP-binding sites, which may provide insights into their mechanism of disease. The approach also offers a roadmap for other researchers to follow in pursuing their own studies of RNA.

The senior author on the paper, published in a special issue of the journal Genome Biology, is Brian D. Gregory, an assistant professor in Penn’s School of Arts and Sciences’ Department of Biology. The research was co-led by doctoral students Ian M. Silverman and Fan Li, and another Penn graduate student, Anissa Alexander, also contributed. The Penn team collaborated with Loyal Goff, Cole Trapnell and John L. Rinn of Harvard University.

The researchers focused their study on RNA binding proteins, or RBPs.

“Every step of an RNA molecule’s life cycle is controlled by this type of protein,” Gregory said. “We wanted to have a database of everywhere an RNA is being touched during its life cycle.”

These sites of interaction could be significant when it comes to diseases that are associated with RNA.

Previously, researchers have characterized individual RNA-protein interactions. The Penn team, however, wanted to develop a technique akin to DNA footprinting, a method that has been used for a few decades to catalog all the interactions between DNA and the proteins that bind to it to regulate how DNA is transcribed. 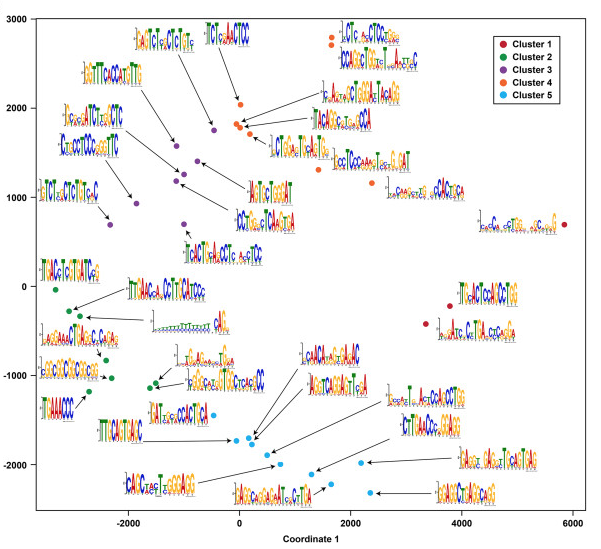 While a few groups had made some headway in RNA footprinting, their techniques involved using synthetic nucleotides to mark the spots of protein interactions, an approach that can only be done in cell cultures, not tissues or whole organisms.

Having the full footprint of RNA-RBP interactions is also important to reveal cases where a combination of interactions is necessary to achieve a certain regulatory result and could turn up other patterns of interest, such as particular RNA sequences that appear more often than expected.

Silverman, Li, Gregory and colleagues investigated the full array of RNAs, known as the transcriptome, in the HeLa human cell line. Their method involved establishing connections between RNA molecules and proteins, by crosslinking, applying RNA-digesting enzymes to degrade the molecules and then sequencing the remaining RNA strands. They reasoned that protein-bound segments of RNA would be protected from degradation and thus compared their results to a control sample in which the proteins had been degraded and wouldn’t serve to protect the RNA strands from digestion.

They confirmed that their method, which they termed PIP-seq for protein interaction profile sequencing, was reproducible and that the RBP binding sites they identified correlated with known binding sites found in earlier experiments.

Examining the binding sites more closely, they found many were located in regions associated with splicing, which readies RNA molecules for translation into proteins. Further, they found recurring groups of sequence motifs, which tended to be related to genetic material associated with important biological processes, including development, immunity and programmed cell death. Thus, their data indicated that, in these collections of related RNA species, groups of specific RBPs appeared to associate with them during their life cycle.

To explore the connection between RBP binding sites and disease, they searched their data for single nucleotides which, when mutated, have been associated with specific diseases, and identified significant overlaps. They found that when mutations associated with early-onset Parkinson’s disease and porphyria cutanea tarda were introduced into RNA probes, specific RBP-RNA interactions were affected in both cases. The Parkinson’s mutations disrupted interactions while the porphyria cutaena tarda mutations enhanced interactions.

This observation supports the growing characterization of certain genetic illnesses, especially neurological ones, as “RNA diseases.”

“A significant direction of future work will be linking these sites of RNA-protein interaction to specific proteins and specific diseases,” Gregory said.

The researchers also noted that their method will allow other scientists, including those who have up until now focused on DNA mutations’ role in disease, to examine their data for the possible involvement of RNA defects. To encourage this type of investigation, the team has made this data publically available on the Web: http://gregorylab.bio.upenn.edu/jbrowse/?data=data/HeLa_PIPseq.