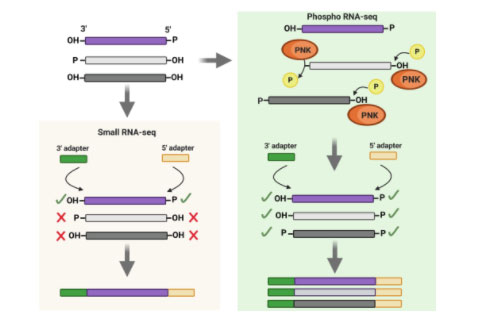 Extracellular RNAs (exRNAs) in biofluids have attracted great interest as potential biomarkers. Although extracellular microRNAs in blood plasma are extensively characterized, extracellular messenger RNA (mRNA) and long noncoding RNA (lncRNA) studies are limited. We have recently reported that human plasma contains fragmented mRNAs and lncRNAs that are missed by standard small RNA-seq protocols due to lack of 5’phosphate or presence of 3’phosphate.

Researchers from the Institute of Biomedicine of Seville (IBiS) and the University of Michigan describe a modified protocol for preparation of small RNA libraries for next generation sequencing called “phospho-RNA-seq.” This protocol has been optimized for use with low-input exRNA-containing samples, such as plasma or serum, and has modifications introduced to capture extracellular RNA with varied 5’and 3’ends.