Treatment for a deadly E. coli strain may be possible, after UNSW Sydney researchers identified a new molecular pathway that controls the potent Shiga toxin.

Escherichia coli, known as E. coli, are bacteria which many people associate with causing mild food poisoning, but some types of E. coli can be fatal.

Dr Jai Tree, the study’s senior author, said the researchers’ discovery of a new molecular pathway that controls Shiga toxin production was important because there was no commercially available treatment for EHEC infections. 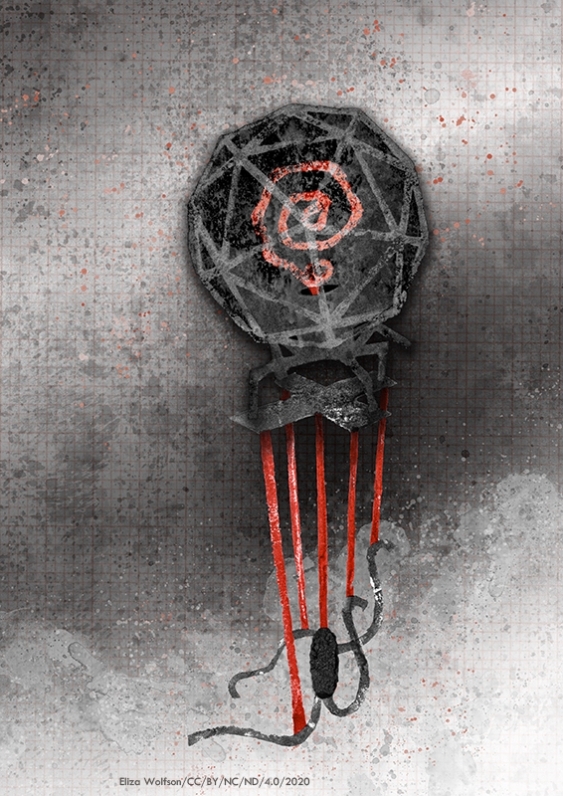 The spider-like icosahedral shape is an abstract depiction of the Shiga toxin bacteriophage with a red genome, stylised as the puppet master of a potentially deadly EHEC infection. Image: UNSW Science

Dr Tree said the UNSW research was the first discovery of a new pathway that controls the Shiga toxins in almost 20 years.

“In 2001, researchers at Tufts and Harvard universities first showed how production of the Shiga toxin was controlled by a bacterial virus, known as a bacteriophage, within the genome. This has been the only known pathway that controls Shiga toxin production for almost two decades,” he said.

“We have extended that work to show a new mechanism of toxin control that is, surprisingly, buried within the start of the DNA sequence that encodes the Shiga-toxin messenger RNA – a working copy of the gene.

“We discovered a very short piece of the toxin messenger RNA is made into a regulatory non-coding RNA that silences the toxin and promotes growth of the pathogen.”

Dr Tree said their findings were a surprise because Shiga toxin genes have been well studied, with almost 7000 published studies in the past 40 years.

“Only recently have we been able use advances in RNA sequencing technology to detect the presence of the new regulatory non-coding RNA embedded within the Shiga toxin messenger RNA,” he said.

“This new regulatory non-coding RNA had been hiding in plain sight for almost 20 years.”

Dr Tree said the researchers’ findings opened up new possibilities for the treatment of EHEC infections.

“Patients largely receive supportive care to manage disease symptoms and to reduce the effects of the toxin on the kidneys,” he said.

“Our work shows a new mechanism for controlling toxin production that may be amenable to new RNA-based therapeutics to inhibit toxin production during an infection. We anticipate this would expand intervention options and potentially allow use of antibiotics that are currently not recommended because they stimulate Shiga toxin production.

“New treatments could therefore reduce the risk of kidney damage, neurological complications and death. We look forward to testing these new interventions in the next stage of our research.”