High-throughput single cell RNA sequencing (scRNA-seq) has become an established and powerful method to investigate transcriptomic cell-to-cell variation, and has revealed new cell types, and new insights into developmental process and stochasticity in gene expression. There are now several published scRNA-seq protocols, which all sequence transcriptomes from a minute amount of starting material. Therefore, a key question is how these methods compare in terms of sensitivity of detection of mRNA molecules, and accuracy of quantification of gene expression.

Here, researchers from the Wellcome Trust Sanger Institute assessed the sensitivity and accuracy of many published data sets based on standardized spike-ins with a uniform raw data processing pipeline. They developed a flexible and fast UMI counting tool (https://github.com/vals/umis) which is compatible with all UMI based protocols. This allowed them to relate these parameters to sequencing depth, and discuss the trade offs between the different methods. To confirm the results, the researchers performed experiments on cells from the same population using three different protocols. They also investigated the effect of RNA degradation on spike-in molecules, and the average efficiency of scRNA-seq on spike-in molecules versus endogenous RNAs. 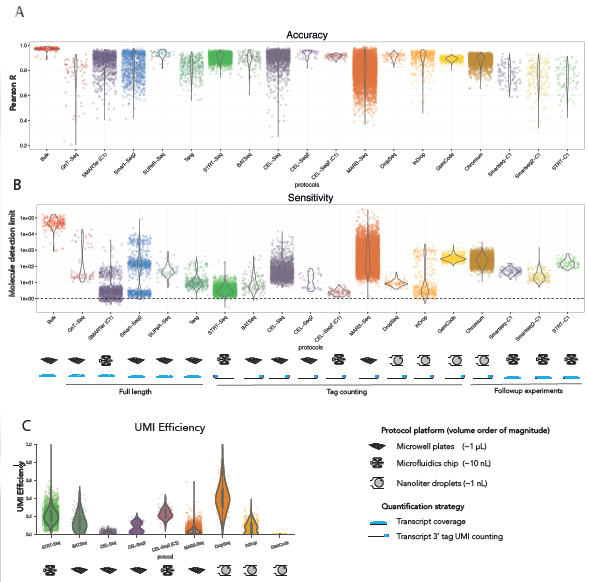 (A) Accuracy. While no protocol reaches the same level of accuracy as bulk RNA sequencing, in general accuracy is high regardless of protocol. Rarely is Pearson correlation lower than 0.6, though some protocols have longer tails with lower accuracy. This might be indicative of a heterogeneous success rate for the protocol.

(B) Sensitivity. All protocols have greater sensitivity than bulk RNA sequencing, indicating that the low input problem they are trying to solve has indeed been addressed at some level. Sensitivity can vary greatly though, between protocols but also across samples within a protocol. Several protocols have the potential to measure single digit spikein molecules.

(C) An alternative approach to measure sensitivity when assuming measured counts correspond to molecule counts is by the UMI efficiency. The efficiency is the number of counted molecules compared to the input number of molecules, . For Ui = E ∙Mi the analysed UMI based data the UMI efficiency largely recapitulates the detection limit. However, note that the molecule counting assumption of UMIs does not hold perfectly. 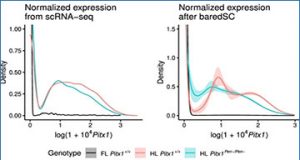 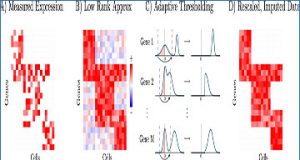