Over the past few decades, many computational methods have been developed to predict the functions of proteins and. These methods can leverage a large variety of genomic and proteomic data sources to achieve accurate functional inferences, but their input data are either gene-centric or biased to the canonical isoforms that are usually best studied in the literature. For example, protein-protein interaction data are generally recorded at the gene level, without including any information about which isoform was actually tested in the experiments.

Thanks to the advent of high-throughput RNA-seq technology, we can massively parallel sequence the whole set of transcript isoforms (translated into protein isoforms) at far higher resolution than ever before. This technology provides unprecedented opportunities to systematically study protein functions at the isoform level. Many methods have been developed to efficiently and precisely quantify the expression levels of transcript isoforms and with less bias than prior data. With the rapid accumulation of high-quality RNA-seq datasets obtained under different conditions, we are more confident than ever in our ability to unravel the functions of protein isoforms. 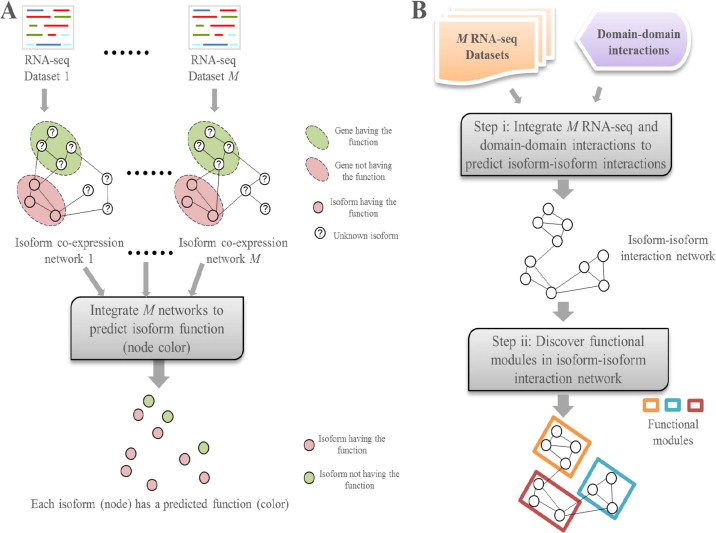 llustration of data sources, flow charts and major features of two high-resolution methods for the functional annotation of proteins at the isoform level: (A) isoform function prediction by integrating many isoform co-expression networks. In each network, each node (small circle) represents an isoform and its color denotes different labels (see legend). Genes with functional annotations are plotted as the large ovals with dotted lines, representing bags of nodes. (B) Two-step functional isoform module discovery. In the first step, multiple isoform-specific data sources are integrated for predicting isoform-isoform interactions (IIIs) that form the III network. The second step discovers modules in this III network that are potentially function-related and can annotate the isoforms in these modules.