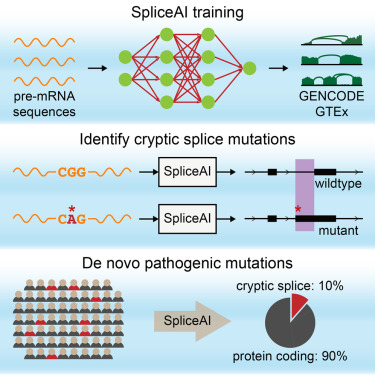 The splicing of pre-mRNAs into mature transcripts is remarkable for its precision, but the mechanisms by which the cellular machinery achieves such specificity are incompletely understood.

Illumina scientists describe a deep neural network that accurately predicts splice junctions from an arbitrary pre-mRNA transcript sequence, enabling precise prediction of noncoding genetic variants that cause cryptic splicing. Synonymous and intronic mutations with predicted splice-altering consequence validate at a high rate on RNA-seq and are strongly deleterious in the human population. De novo mutations with predicted splice-altering consequence are significantly enriched in patients with autism and intellectual disability compared to healthy controls and validate against RNA-seq in 21 out of 28 of these patients. The researchers estimate that 9%-11% of pathogenic mutations in patients with rare genetic disorders are caused by this previously underappreciated class of disease variation.