Ribonucleoprotein particles (mRNPs) are complexes consisting of mRNAs and RNA-binding proteins (RBPs) which control mRNA transcription localization, turnover, and translation. Some mRNAs within the mRNPs have been shown to undergo degradation or storage. Those transcripts can lack general mRNA elements, like the poly(A) tail or 5′ cap structure, which prevent their identification through the application of widely-used approaches like oligo(dT) purification.

Researchers from the University of Basel describe a modified cross-linking affinity purification protocol (cCLAP) based on existing cross-linking and immunoprecipitation (CLIP) methods to isolate mRNAs which could be deadenylated, decapped and/or partially degraded in mRNPs, opening the possibility to detect different types of non-coding RNAs (ncRNAs). Once isolated, the RNAs are subjected to adapter ligation and subsequently proceeded to Next-generation sequencing (NGS). Due to the fast and efficient cross-linking and quenching steps, this protocol is also suitable for transiently induced mRNP granules. Examples include processing bodies (PBs) or stress granules (SGs) triggered by extrinsic stressors. Its reproducibility and broad applications make this protocol a useful and powerful tool to study the RNA compositions of specific RNPs. 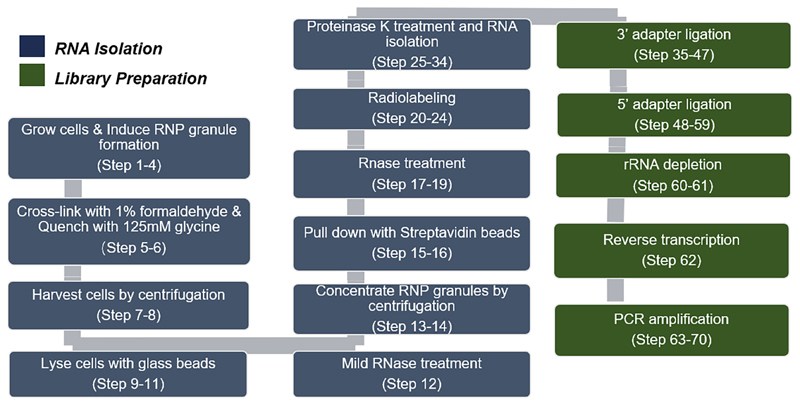 Flowchart and summary of the approach