Models for how lncRNAs function depend on thermodynamically stable secondary and higher-order structures that RNAs can form in the context of a cell. Probing accessible RNA bases can provide data to build models of RNA conformation that provide insight into RNA function, molecular evolution, and modularity.

To study the structure of the lncRNA in cells, researchers from Yale University built upon recent advances in RNA secondary structure mapping and modeling to develop Targeted Structure-Seq, which combines chemical probing of RNA structure in cells with target-specific massively parallel sequencing. By enriching for signals from the RNA of interest, Targeted Structure-Seq achieves high coverage of the target RNA with relatively few sequencing reads, thus providing a targeted and scalable approach to analyze RNA conformation in cells. The researchers used this approach to probe the full-length lncRNA Xist and identified new structural elements that are evolutionarily conserved, including a new element proximal to the C repeats that is important for Xist function. 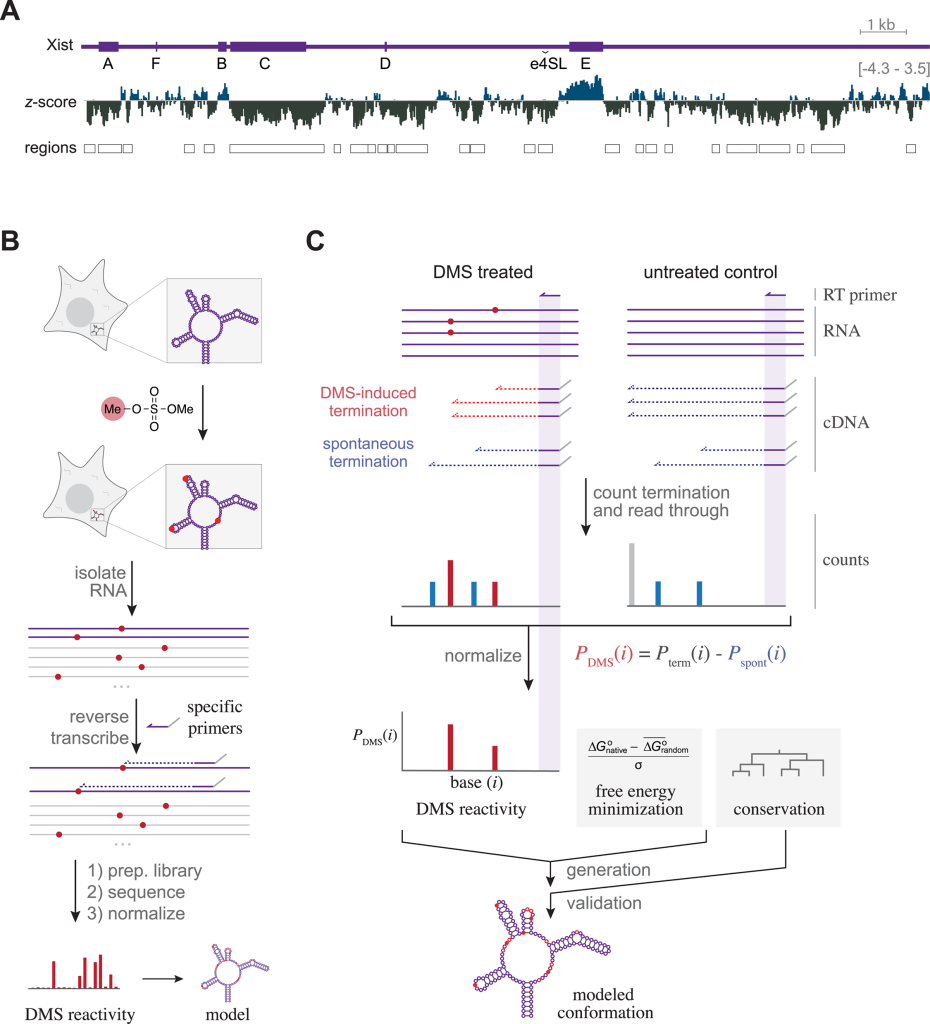 Examining the conformations of elements within Xist RNA using a mixture of computational approaches and Targeted Structure-Seq.

A. Xist RNA (purple) contains several repetitive elements (indicated as thick regions, labeled A-F), and a conserved stem-loop structure in exon 4 (labeled as e4SL). The predicted z-score for 150 nt windows calculated every 10 nt (negative and positive values in gray and blue, respectively). Boxes indicate overlapping windows with z-score <1σ Xist average, classified as low z-score regions. B. An overview of Targeted Structure-Seq. A target RNA (purple) can be methylated (red circles) with dimethylsulfate (DMS, shown with red methyl group) in cells. After RNA isolation, the sites of methylation are determined using reverse transcription with primers specific for the RNA of interest (purple) but not other RNAs (gray). Sequencing and analysis of these data can be used to determine the DMS reactivity at each base, and can aid in modeling of the cellular conformation of the RNA. C. To determine which termination events were caused by DMS (red) as opposed to spontaneous termination (blue), the termination and read-through events are counted. Using an untreated control to estimate the rate of spontaneous termination, the data is normalized to determine the DMS reactivity at each base. These data can be used for free energy minimization to model the RNA conformation, which can be further validated by examining the evolutionary conservation of base pairing. 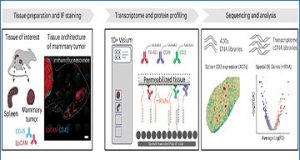 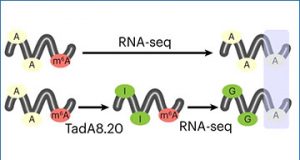