Profiling of Small Nucleolar RNAs by Next Generation Sequencing

One of the most abundant, yet least explored, classes of RNA is the small nucleolar RNAs (snoRNAs), which are well known for their involvement in post-transcriptional modifications of other RNAs. Although snoRNAs were only considered to perform housekeeping functions for a long time, recent studies have highlighted their importance as regulators of gene expression and as diagnostic/prognostic markers. However, the prognostic potential of these RNAs has not been interrogated for breast cancer (BC).

Researchers from the University of Alberta set out to identify snoRNAs as prognostic markers for BC. Small RNA sequencing (Illumina Genome Analyzer IIx) was performed for 104 BC cases and 11 normal breast tissues. Partek Genomics Suite was used for analyzing the sequencing files. Two independent and proven approaches were used to identify prognostic markers: case-control (CC) and case-only (CO). For both approaches, snoRNAs significant in the permutation test, following univariate Cox proportional hazards regression model were used for constructing risk scores. Risk scores were subsequently adjusted for potential confounders in a multivariate Cox model. For both approaches, thirteen snoRNAs were associated with overall survival and/or recurrence free survival. Patients belonging to the high-risk group were associated with poor outcomes, and the risk score was significant after adjusting for confounders. Validation of representative snoRNAs (SNORD46 and SNORD89) using qRT-PCR confirmed the observations from sequencing experiments. The researchers also observed 64 snoRNAs harboring piwi-interacting RNAs and/or microRNAs that were predicted to target genes (mRNAs) involved in tumorigenesis. 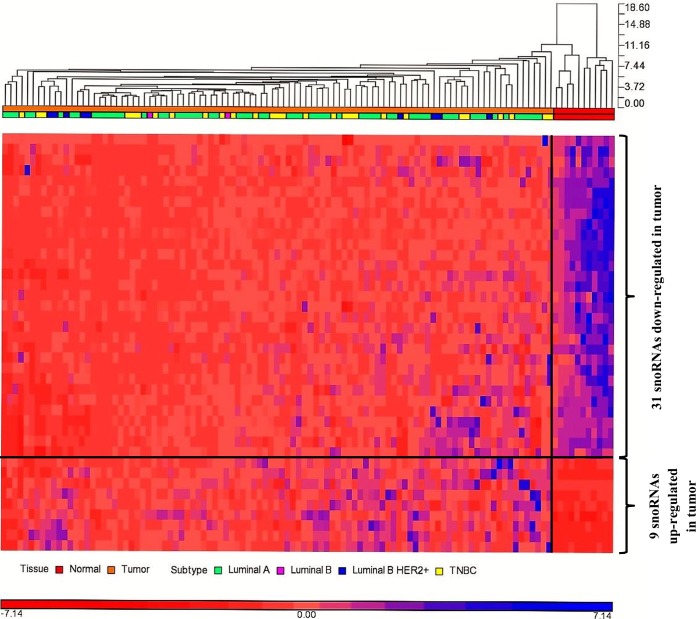 These results demonstrate the potential of snoRNAs to serve (i) as novel prognostic markers for BC and (ii) as indirect regulators of gene expression.