In a new Yale-led study, investigators have revealed previously unknown factors that contribute to the hardening of arteries and plaque growth, which cause heart disease. Their insight is the basis for a promising therapeutic approach to halt and potentially reverse plaque buildup and the progression of disease, the researchers said.

Current treatments for plaque and hardened arteries, a condition known as atherosclerosis, can slow but not improve the disease. Experts believe that may be due to ongoing inflammation in blood vessels. To understand the factors contributing to this inflammation, the research team focused on a group of proteins, called transforming growth factor beta (TGFß), that regulates a wide range of cells and tissues throughout the body.

Using cultured human cells, the researchers discovered that TGFβ proteins trigger inflammation in endothelial cells — the cells that form the inner lining of artery walls — but not in other cell types. With a technique called single cell RNA-seq analysis, which measures the expression of every gene in single cells, they then showed that TGFβ induced inflammation in these cells in mouse models. This finding was notable, said the researchers, because TGFβ proteins are known to decrease inflammation in other cells in the body.

The researchers also showed that when the TGFβ receptor gene is deleted in endothelial cells, both the inflammation and plaque in blood vessels are significantly reduced.

To test this approach as a potential therapy, the team, led by professor of medicine Michael Simons, M.D., used an “interfering” RNA, or RNAi, drug developed at Yale, to disrupt TGFß receptors. Interfering RNA use a gene’s own DNA sequence to turn off or silence the gene. To deliver the drug only to endothelial cells in the blood vessel walls of mice, they employed microscopic particles, or nanoparticles, created by their co-authors at MIT. This strategy reduced inflammation and plaque as effectively as the genetic technique. 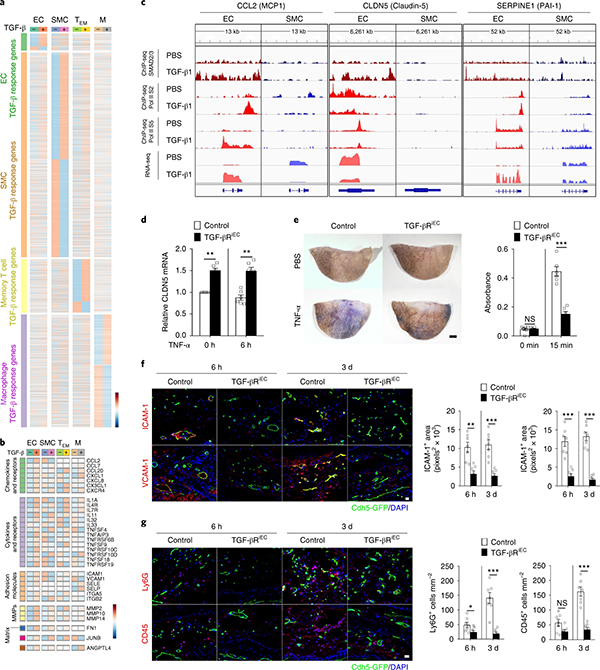 The findings identify TGFß signaling as a major cause of chronic vessel wall inflammation, and demonstrate that disruption of this pathway leads to cessation of inflammation and substantial regression of existing plaque, said the scientists.

Based on this discovery, investigators at Yale and MIT have launched a biotech company, VasoRX, Inc., to develop this targeted approach, using the RNAi drug delivered by nanoparticles as a potential therapy for atherosclerosis in people.