Protein expression gets the heart pumping 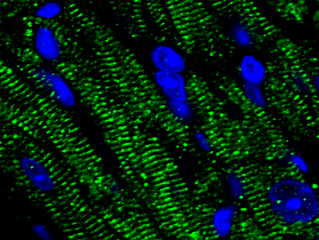 HOUSTON – (April 22, 2014) – Most people think the development of the heart only happens in the womb, however the days and weeks following birth are full of cellular changes that play a role in the structure and function of the heart. Using mouse models, researchers at Baylor College of Medicine have now been able to categorize the alternative splicing (the process in which genes code proteins, determining their role) that takes place during these changes and what mechanisms they affect.

The findings, which appear in Nature Communications, also helped to identify a protein that regulates some of the alternative splicing and then goes on to change dramatically in its expression during the postnatal period.

“The cells of the heart stop dividing after birth but they have to continue growing and working together for the heart to pump the blood. So basically, we have made the connection between the process of alternative splicing and the development of this system that coordinates heart contraction and function,” said Thomas Cooper, the S. Donald Greenberg professor of pathology & immunology at Baylor.

Researchers were able to separate two main cell types of the mouse heart, the cardiomyocytes and cardiac fibroblasts. Using RNA sequencing they looked at early- and late-stage development within the days following birth. RNA sequencing is a technique that reveals the messages transmitted to the cell from the genome, allowing researchers to see the mechanisms associated with gene expression. During the sequencing, Cooper and his colleagues were able to see what genes are turned on and off and which ones undergo an alternative splicing change.

By pinpointing these changes, the team of researchers identified the CELF1 protein as being responsible for regulating certain alternative splicing events, Cooper said. So by turning on and off CELF1 expression at different points in development, researchers were able to see how the protein affects development during this stage.

“We looked at hundreds of genes that undergo alternative splicing and were able to see which ones are regulated by CELF1,” Cooper said. “We asked if is there anything in common among these genes and found that some were responsible for endocytosis and vesicular trafficking. So what is going on in heart development that is related to these processes associated with cell membrane dynamics?”

It turns out, Cooper said, that the cell membrane machinery that is required to coordinate contraction, the electrical activity of the heart, all develops in this postnatal period.

There are some ailments that CELF1 is associated with such as arrhythmias and some forms of muscular dystrophy and Cooper said it is possible that this protein could provide a treatment target.

“Now we know what happens during this period in terms of what genes are on and off and what alternative splicing takes place. This is new information for further studies to build on,” he said. “There is still information about this developmental stage that must be looked at first.”