Next-generation sequencing of cellular RNA (RNA-seq) is rapidly becoming the cornerstone of transcriptomic analysis. However, sequencing errors in the already short RNA-seq reads complicate bioinformatics analyses, in particular alignment and assembly. Error correction methods have been highly effective for whole-genome sequencing (WGS) reads, but are unsuitable for RNA-seq reads, owing to the variation in gene expression levels and alternative splicing.

Unlike WGS read correctors, which use a global threshold to determine trusted k-mers, Rcorrector computes a local threshold at every position in a read. 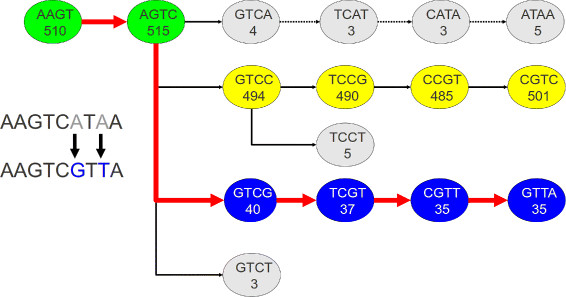 Path extension in Rcorrector. Four possible path continuations at the AGTC k-mer (k=4) in the De Bruijn graph for the r= AAGTCATAA read sequence. Numbers in the vertices represent k-mer counts. The first (top) path corresponds to the original read’s representation in the De Bruijn graph. The extension is pruned after the first step, AGTC →GTCA, as the count M(GTCA)=4 falls below the local cutoff (determined based on the maximum k-mer count (494) of the four possible successors of AGTC). The second path (yellow) has higher k-mer counts but it introduces four corrections, changing the read into AAGTCCGTC. The third path (blue) introduces only two corrections, to change the sequence into AAGTCGTTA, and is therefore chosen to correct the read. The fourth (bottom) path is pruned as the k-mer count for GTCT does not pass the threshold. Paths 2 and 3 are likely to indicate paralogs and/or splice variants of this gene

Rcorrector has an accuracy higher than or comparable to existing methods, including the only other method (SEECER) designed for RNA-seq reads, and is more time and memory efficient. With a 5 GB memory footprint for 100 million reads, it can be run on virtually any desktop or server.

Availability – The software is available free of charge under the GNU General Public License from https://github.com/mourisl/Rcorrector/