The mammalian cell nucleus contains dozens of membrane-less nuclear bodies that play significant roles in various aspects of gene expression. Several nuclear bodies are nucleated by specific architectural noncoding RNAs (arcRNAs) acting as structural scaffolds. A team led by researchers at the University of Tokyo have reported that a minor population of cellular RNAs exhibits an unusual semi-extractable feature upon using the conventional procedure of RNA preparation and that needle shearing or heating of cell lysates remarkably improves extraction of dozens of RNAs. Because semi-extractable RNAs, including known arcRNAs, commonly localize in nuclear bodies, this feature may be a hallmark of arcRNAs. Using the semi-extractability of RNA, the researchers performed genome-wide screening of semi-extractable long non-coding RNAs to identify new candidate arcRNAs for arcRNA under hyperosmotic and heat stress conditions. After screening stress-inducible and semi-extractable RNAs, hundreds of readthrough downstream-of-gene (DoG) transcripts over several hundreds of kilobases, many of which were not detected among RNAs prepared by the conventional extraction procedure, were found to be stress-inducible and semi-extractable. The researchers further characterized some of the abundant DoGs and found that stress-inducible transient extension of the 3′-UTR made DoGs semi-extractable. Furthermore, they were localized in distinct nuclear foci that were sensitive to 1,6-hexanediol. These data suggest that semi-extractable DoGs exhibit arcRNA-like features and this semi-extractable RNA-seq is a powerful tool to extensively monitor DoGs that are induced under specific physiological conditions. 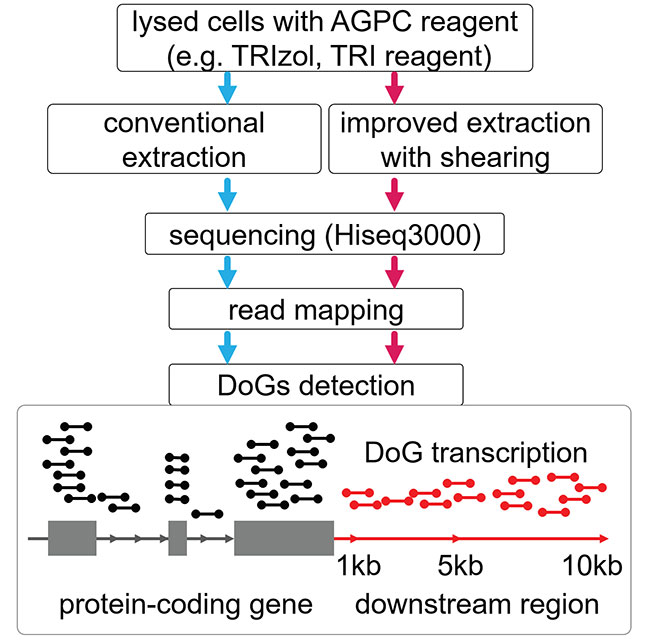