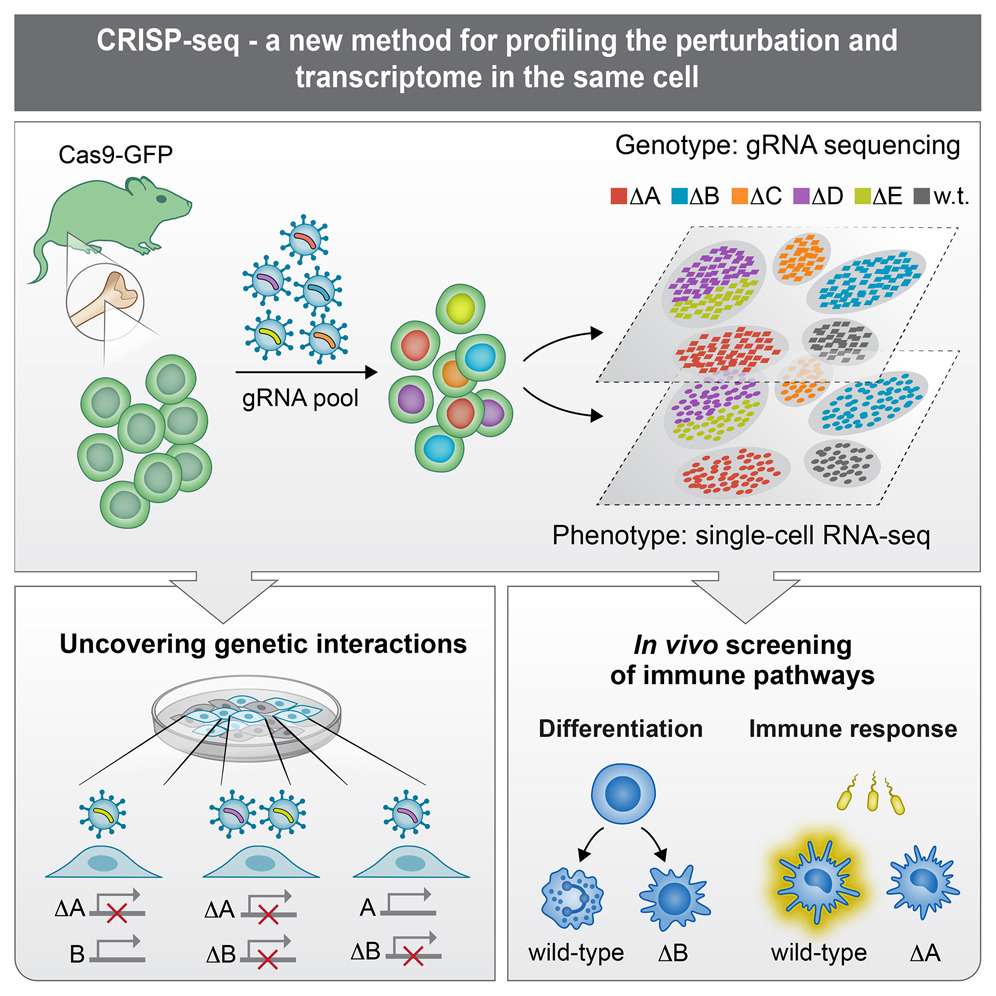 What combinations of mutations help cancer cells survive? Which cells in the brain are involved in the onset of Alzheimer’s? How do immune cells conduct their convoluted decision-making processes? Researchers at the Weizmann Institute of Science have now combined two powerful research tools – CRISPR gene editing and single cell genomic profiling – in a method that may finally help us get answers to these questions and many more.

The new technology enables researchers to manipulate gene functions within single cells, and understand the results of each change in extremely high resolution. A single experiment with this method, say the scientists, may be equal to thousands of experiments conducted using previous approaches, and it may advance the field of genetic engineering for medical applications.

The gene-editing technique CRISPR is already transforming biology research around the world, and its clinical use in humans is just around the corner. CRISPR was first discovered in bacteria as a primitive acquired immune system, which cuts and pastes viral DNA into their own genomes to fight viruses. In recent years, this bacterial system has been adopted by researchers to snip out or insert nearly any gene in any organism or cell, quickly and efficiently. “But CRISPR, on its own, is a blunt research tool, since we often have trouble observing or understanding the outcome of this genomic editing,” says Prof. Ido Amit of the Weizmann Institute of Science’s Immunology Department, who led the study. “Most studies so far have looked for black-or-white types of effects,” adds Dr. Diego Jaitin, of Amit’s lab group, “but the majority of processes in the body are complex and even chaotic.”

Amit and his lab team have been developing the second arm of the new method – single-cell RNA sequencing, a rapidly advancing field that is making an impact on many areas of research and biotechnology. By sequencing the messenger RNA molecules in each individual cell – messages that indicate cellular activity – the researchers are able to uncover the molecular makeup of each cell, and to discern a nuanced range of cell identities and functions in a given cell population. “It is a new molecular microscope,” says Amit. Thousands of cells from a particular tissue in the body can be sequenced at once in his lab, uncovering variation in cell identities and functions. This method has been used to understand everything from the effects of fetal brain development, to how common immune cells function differently in the various tissues of our body, including their involvement in cancer or neurodegeneration. But single-cell sequencing has mostly been an observatory tool, providing a snapshot of a given tissue sample.

Combing CRISPR with the fine resolution of single-cell RNA sequencing can enable researchers to actively tinker with the genes in cells, and then to understand their functions within numerous cell types in a variety of situations. The challenge for Amit and his group, including lead authors Drs. Jaitin, Ido Yofe and Assaf Weiner, and research student David Lara-Astiaso, was to adapt the CRISPR gene editing technology so it could be used in combination with single-cell sequencing. The group envisioned targeting many genes at once, including combined targets in the same cell, and then identifying the resulting changes to the cell and its function. This undertaking required, on the one hand, the development of new molecular techniques for simultaneously identifying targeted cells and the genome edits introduced to them and, on the other hand, the development of new computational methods for analyzing a community of cells with different genotypes and phenotypes.

The researchers then faced a new type of data – with quite a few missing values. “By linking cells with similar behaviors, something like the algorithms Netflix uses to group people who like similar movies, we were able to identify previously unrated function for many genes,” says Weiner who developed the algorithms to analyze the data.

The combined method enabled the research team to “probe the wiring” of particular mouse immune cells as they combat pathogens. This “proof of principle” experiment identified genes that are important for the function of various immune cells, and illustrated in high resolution how they direct a complex and concentrated response against invading pathogens.

Combining the two methods, say the scientists, can provide new insight that neither method, alone, would be able to yield. The results, says Yofe, can be observed in a resolution never before achieved for this type of study, and these can be obtained more easily and in a fraction of the time. The versatility of the method, combined with the precision the team developed by refining their design through experimentation, suggest that it can be used in the future to investigate many open questions, and produce new results that no one can yet predict.

The results of the research in Amit’s lab were published today in Cell, along with descriptions of two similar technologies developed at the Broad Institute in Boston and the University the California, San Francisco.

“The advent of CRISPR presented a true leap in the ability to understand and start editing immune circuits,” says Amit. “We are hoping that our approach will be the next leap forward, providing, among other things, the ability to engineer immune cells for immunotherapy.”