Our brain is extremely complex, performing countless complicated processes that allow us to think, move and feel. This is only possible because of the enormous diversity of different cell types in the brain, each with a very specific function. Researchers at the Max Planck Institute of Neurobiology, together with an international team, investigated how this diversity arises. They established a method to analyze the developmental relationships of cell types in the mouse brain. Their results show that similarities in cell types are not a measure for the degree of relationship: Cells of similar cell types are often unrelated. Conversely, cells of very different types can share the same origin.

Our body consists of hundreds of cell types, each with a very specific function. These cells can differ greatly in their properties – which can be clearly seen by comparing, for example, a blood cell to a skin cell. Nevertheless, each cell carries identical genetic information. The diversity is possible because cells do not use all of this information. Each cell type only activates the genes that it actually requires. This subset is then translated into RNA and proteins, resulting in a very specific cell type.

The fate of most cells is determined during development. The process when unspecialized cells mature into specific cell types is called differentiation. Without differentiation, a fertilized egg cell could not give rise to an organism with different tissue types. Initially, the egg cell is capable of forming any cell type. In its descendant cells, this ability gradually decreases, so that towards the end of embryonic development, cells are usually only able to differentiate into one specific cell type. 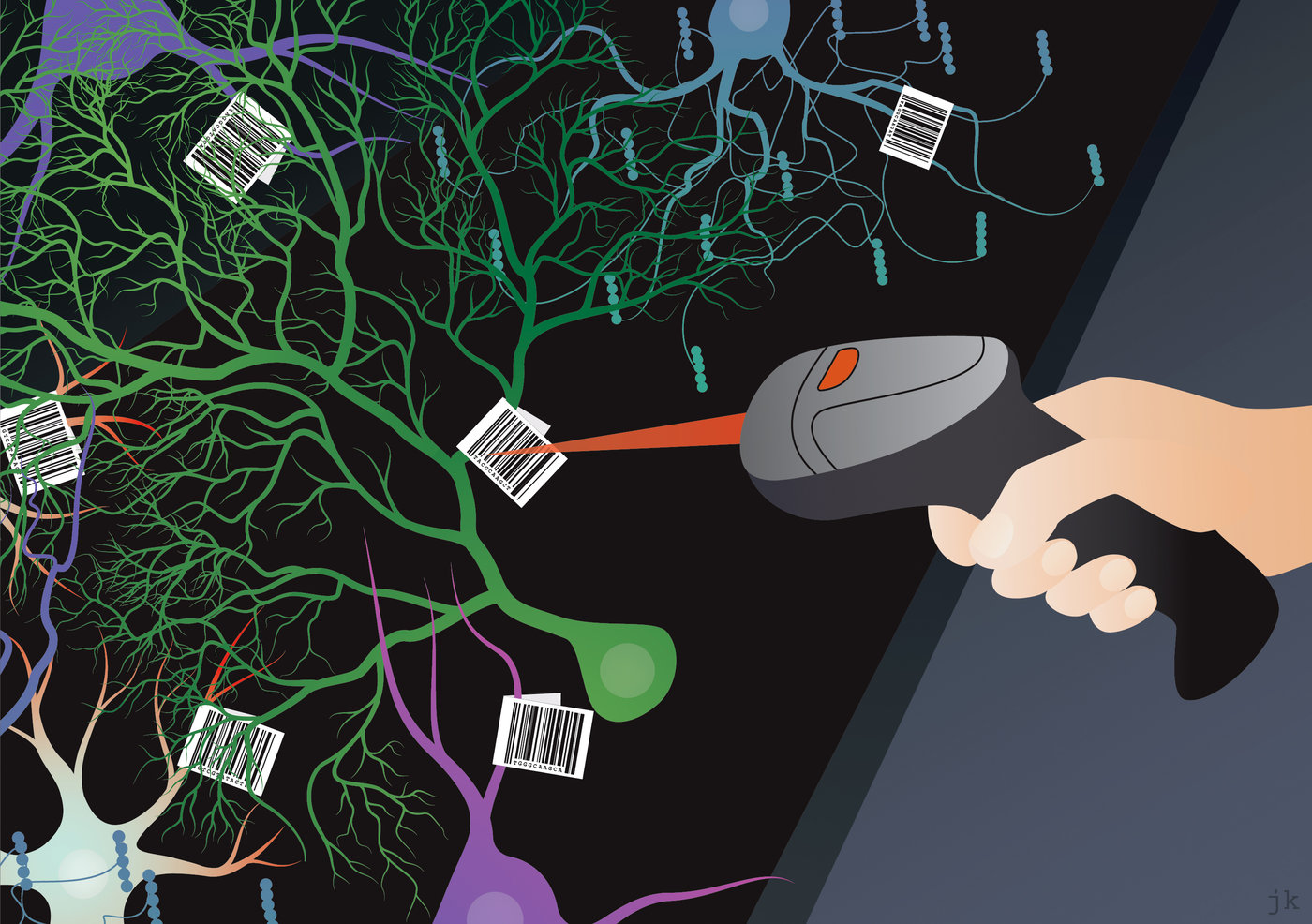 Large variety in the brain

A particularly large variety of cell types is found in the brain, a majority of which are glial cells and neurons. These can be further divided into various specialized cell types: There are over 100 different types just for inhibitory neurons. They originate from neural progenitor cells that divide several times at the beginning of development. Later, their daughter cells give rise to the different cell types.

An unresolved question is still how this enormous diversity of cell types arises from undifferentiated progenitor cells within just a few weeks in humans or days in mouse. An international team led by Christian Mayer investigated the mechanisms that give rise to cell diversity in the mouse brain. The researchers were particularly interested whether different cell types can originate from a single progenitor cell, and at what time point during development the fate of the neurons becomes determined.

Barcodes made of artificial DNA

The scientists developed a new technique to label progenitor cells. To do so, they created millions of artificial DNA sequences, so-called barcodes. By inserting one of the barcodes in each cell, thousands of progenitor cells were uniquely marked – similar to the barcodes we know used to scan consumer goods. When a labeled cell divided, it passed the barcode onto its daughter cells, making it possible to identify which cells descended from each other. The researchers combined this method with single-cell RNA sequencing, which identifies all active genes in a cell. Based on this information, they were able to classify the barcode-marked cells into different cell types.

By combining the two methods, the scientists showed that cell types and similarities between them cannot be used to make assumptions about developmental relationships: contrary to what is generally thought, cells of a similar cell type often cannot be traced back to a common origin in development. This means that unrelated progenitor cells can give rise to similar cell types (convergence).

The scientists were also able to demonstrate the opposite scenario in inhibitory neurons: even different cell types in different brain structures can originate from the same progenitor cell (divergence). In this case, the progenitor cell seems to determine the neuron’s fate – differentiation thus begins at the level of progenitor cells, and not later due to external signals. Accordingly, one progenitor cell can give rise to various neuronal cell types, and surprisingly until late in development – a time point when it was assumed that this potential no longer existed.

The scientists expect that, based on these results, neurodevelopmental disorders will be better understood in the future. For example, examining the developmental relationships of cells could provide information about why certain groups of neurons are affected by genetic mutations that cause neurological and psychiatric illnesses. In addition, the novel method can be extended to any other tissue type, thus opening up an enormous spectrum of possible applications.