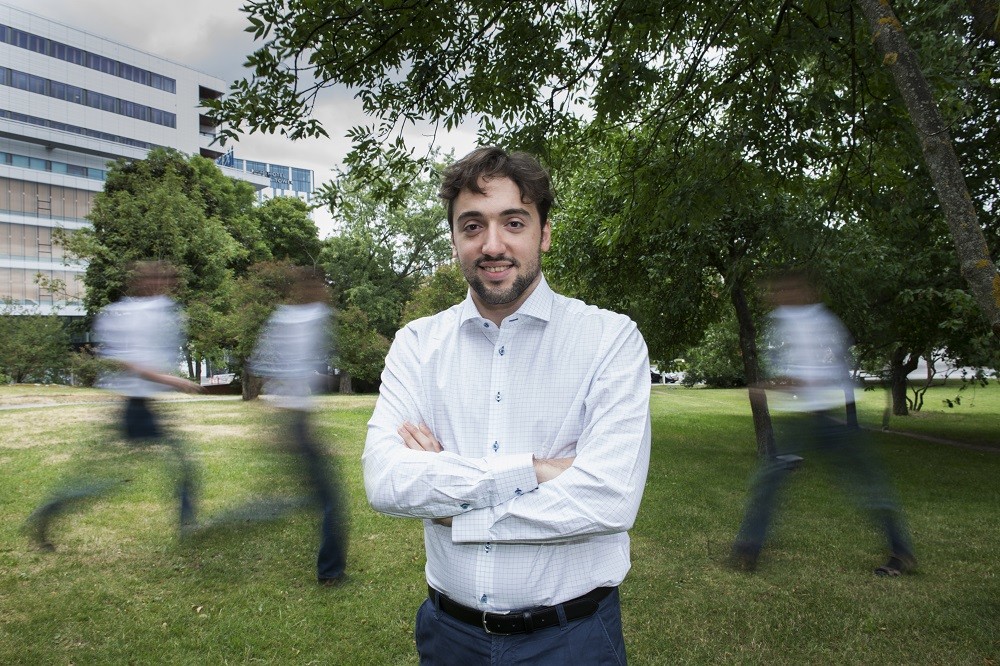 The new method can be compared to a photo captured with a long exposure, where stationary objects are sharp (in this image first author Gioele La Manno) while objects in motion are blurred (in this image Sten Linnarsson). Photo: Stefan Zimmerman

Researchers at Karolinska Institutet and Harvard Medical School report in the journal Nature that they have developed a technique for capturing dynamic processes in individual cells. Apart from studying disease processes, the method can be used to observe in detail how specialised cells are formed during embryonic development.

The body is composed of specialised cells that give each organ its unique function. The brain, for instance, is made up of hundreds of different kinds of neurons, while the kidneys have specialised cells for filtering blood and the heart muscle cells have a built-in pacemaker function. Organs are formed as the embryo develops through a process of gradual specialisation. The fertilised egg divides and as more cells are formed they start to take on more specific functions. Similar processes are also found in tumours, which gradually develop into a kind of organ with blood vessels and supporting cells that help the tumour grow.

What determines the unique function of each cell is the specific genes that are active within it. In neurons, for example, genes are activated that control electrical signals, while muscle cells use genes for motor proteins. In recent years, Swedish and international researchers have developed methods for mapping the cellular composition of complex tissues by studying the gene activity of individual cells. The downside of these methods is that they are destructive. Measuring gene activity of individual cells involves destroying the cells so that their content can be analysed, which makes it difficult to study dynamic processes.

“It’s like a photograph in which all movement is frozen in time,” explains Professor Sten Linnarsson at the Department of Medical Biochemistry and Biophysics, Karolinska Institutet, and one of the researchers who led the study. “We’ve now developed a new method that measures not only genetic activity but also changes in this activity in individual cells. You can compare this to a photo captured with a long exposure, which results in motion blur: stationary objects are sharp while objects in motion are blurred. Objects moving quickly are blurrier, and the direction of movement is revealed by the direction of blur.”

Method to be used to study tumour formation, wound healing and the immune system

The new method exploits the fact that when genes are activated, a series of RNA molecules are formed in a certain order. By separating out these molecules, the researchers can work out if a gene has just been activated or if, for example, it is about to be switched off.

“This new method allows us to observe in detail how specialised cell types are formed in the embryo, including the human embryo,” says Professor Linnarsson. “It can also be used to study dynamic disease processes, such as tumour formation, wound healing and the immune system.” 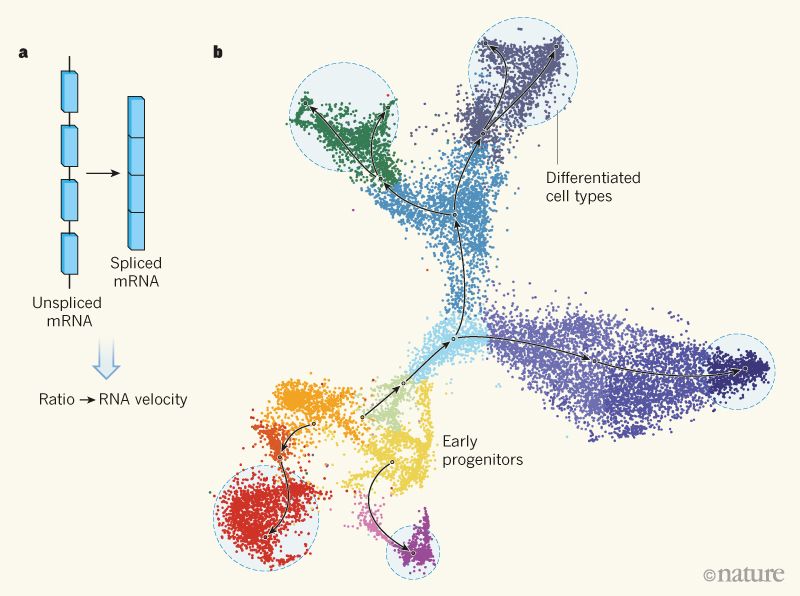 a, As messenger RNA matures, sections of the immature transcript are removed — a process called splicing. When the expression of a gene increases, a transient increase in the proportion of immature, unspliced transcripts compared with that of mature, spliced transcripts is observed in the cell. By contrast, a higher proportion of spliced transcripts is seen for a short time when expression of the gene decreases (not shown). La Manno et al. measured the ratio of unspliced to spliced transcripts for each gene in a single cell to calculate a quantity called the RNA velocity, which reveals how gene expression is changing. b, By measuring RNA velocity in thousands of cells in a tissue (here, in neurons in the developing mouse brain), the authors could generate maps that show not only how closely related cells are to one another (with closeness indicated by similar colours), but also which cells they will become similar to in the future (indicated by arrows), according to the gene-expression changes they are undergoing. RNA velocity successfully tracks early progenitors (orange and yellow) that eventually give rise to a range of differentiated cell types (blue dashed circles).