RIVERSIDE, Calif. – The mosquito Aedes aegypti, which can spread dengue fever, chikungunya, Zika fever, and yellow fever virus, requires a blood meal to develop eggs.  One way to control the spread of these diseases is to tamper with the reproductive events that follow this mosquito’s blood meal.

This is what a team of scientists at the University of California, Riverside has explored at the molecular level. The researchers focused on small regulatory RNA molecules, called microRNAs, which play a critical role in mosquito egg maturation.

They studied microRNA expression in the Aedes aegypti fat body—the metabolic center that plays a key role in reproduction. Since proper functioning of the fat body is essential for the development of the female reproductive system after a blood meal, identifying which miRNAs are important to fat body functions, and what specific genes they target, can help design ways to manipulate the levels of microRNA or their targets, affect their interactions, disrupt mosquito reproduction, and thus prevent the spread of diseases the mosquitoes transmit.

The researchers report online this week in the Proceedings of the National Academy of Sciences that they observed five major microRNA expression peaks within a 48-hour period following the female mosquito’s blood meal.

“What we observed is that the levels of many miRNAs change significantly throughout the 48-hour period following a blood meal, indicating that these miRNAs, in turn, may be establishing significant changes in expression of key genes during this time in the fat body,” said Fedor V. Karginov, an assistant professor of cell biology and neuroscience, who co-led the research team along with Alexander S. Raikhel, a distinguished professor of entomology at UC Riverside.  “Our work has given us a much needed picture of which miRNAs are abundant in the fat body tissue, how each miRNA subgroup changes over time, and we have confirmation that specific up- and down-regulation of miRNA levels takes place during egg development.”

Specifically, the researchers measured the levels of all microRNAs in the fat body (around 100 different miRNAs) at five points of time, starting just before mosquitos take a blood meal, and then 6, 24, 36, and 48 hours after the blood meal. The timing of these was chosen based on previously known information on the timing of major physiological changes – or milestones – in the fat body after a blood meal.

Karginov explained that each microRNA, together with a partner protein called Argonaute or “Ago,” binds to (or “targets”) several to many “messenger RNAs” (mRNAs), and thus down-regulates the expression of the corresponding genes. Determining the targets of important miRNAs is crucial to uncover the regulatory gene networks that drive the physiological changes in the fat body after blood meal.

Karginov, Raikhel and their team members experimentally identified the binding sites for Ago/miRNAs on mRNAs in the fat body. They performed this identification at two points of time to study any changes that may have occurred, using “CLIP-seq,” an experimentally challenging procedure that, to Karginov and his team’s knowledge, has not been used on mosquito tissues before, and that provides a large trove of potential microRNA-mRNA interactions for further investigation.

Identification of miRNA targets in the fat body by CLIP-seq 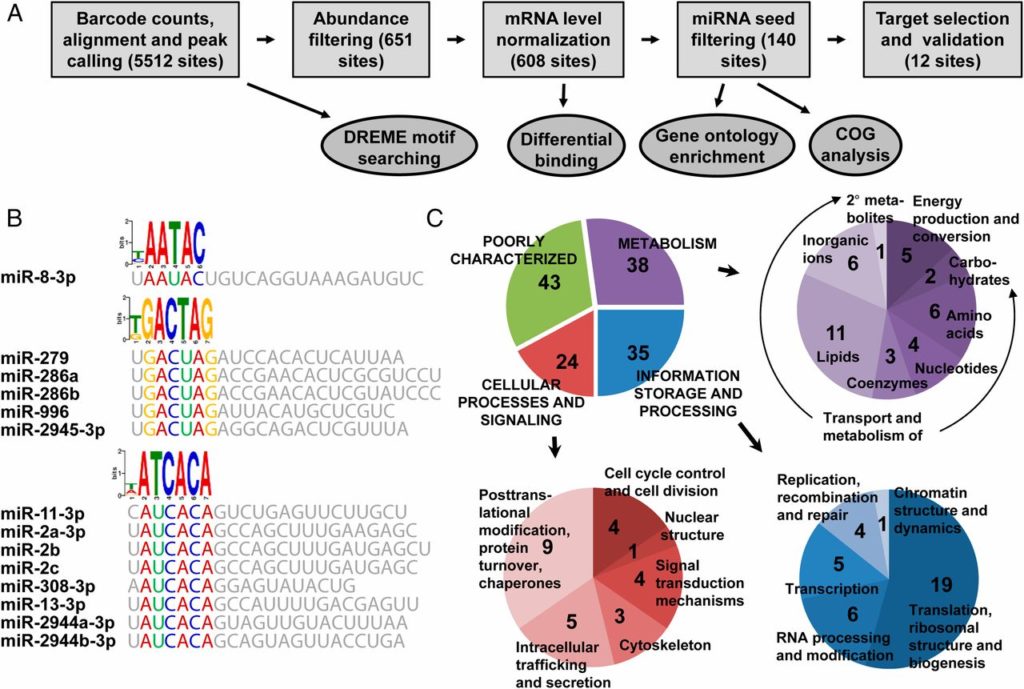 (A) Summary of the analysis pipeline. (B) Characteristic motif logos of 3′ UTR peaks. Characteristic reverse complement logos identified by DREME analysis of 3′ UTR peaks are shown with corresponding miRNA seed regions. Peak calling was performed from six AGO1 CLIP-seq libraries, and 3′ UTR peaks were used as input for DREME with a minimal core width as 6 nt. (C) Clusters of Orthologous Groups functional assignments for the 140 high-confidence targets. In the detailed illustration of cellular processes and signaling, two instances were each counted twice, because both were assigned to two different functional groups.

“The CLIP-seq data have given us insight into which genes the microRNA target, providing a solid foundation for future studies of miRNA regulation during the egg production cycle,” Raikhel said. “Now that we know these genes, we are a step closer to controlling the spread of Aedes aegypti by disrupting a key process in the reproductive cycle: egg production.”

Karginov and Raikhel were joined in the research by Xiufeng Zhang (first author of the paper), a postdoctoral researcher in Raikhel’s lab; Emre Aksoy, a second-year student in the Graduate Program in Genetics, Genomics and Bioinformatics; and Thomas Girke, a professor of bioinformatics.