Researchers estimate number of human transcripts with protein-coding potential is greater than 200,000

Biological and biomedical research relies on comprehensive understanding of protein-coding transcripts. However, the total number of human proteins is still unknown due to the prevalence of alternative splicing.

Now, a team led by researchers at Shanghai Jiao Tong University have detected 31,566 novel transcripts with coding potential by filtering their ab initio predictions with 50 RNA-seq datasets from diverse tissues/cell lines. PCR followed by MiSeq sequencing showed that at least 84.1% of these predicted novel splice sites could be validated. In contrast to known transcripts, the expression of these novel transcripts were highly tissue-specific. Based on these novel transcripts, at least 36 novel proteins were detected from shotgun proteomics data of 41 breast samples. 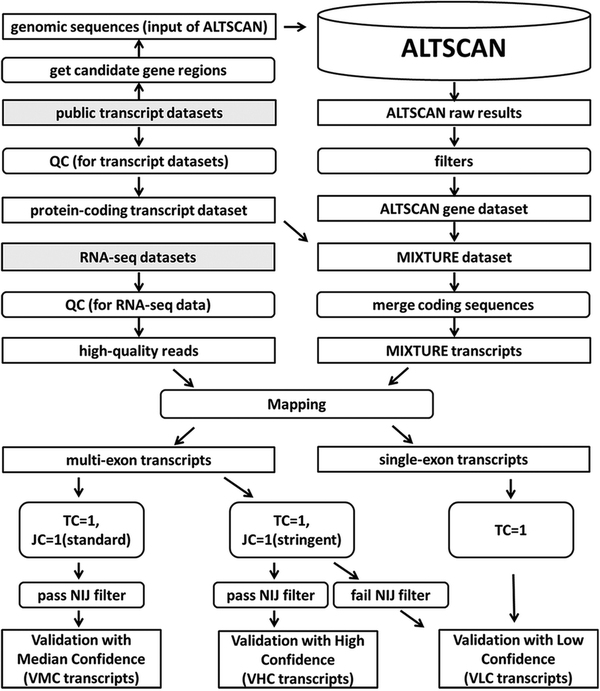 A diagrammatic representation of transcript prediction using ALTSCAN and validation pipeline based on RNA-seq datasets. The upper part shows the pipeline of alternative transcript prediction and the MIXTURE dataset construction. The lower part shows the pipeline for transcript validation with RNA-seq data. The grey blocks indicate raw public data. Candidate gene regions were extracted from various public annotations and then ASs were predicted by ALTSCAN for these regions. Together with the well-annotated KNOWN transcripts, ALTSCAN transcripts were validated with a large number of RNA-seq data. TC is short for transcript coverage and JC is short for junction coverage. The NIJ (novel internal junction) filter was used to check if novel internal junction(s) existed in transcripts. The novel transcript datasets VHC, VMC and VLC were defined as in the figure.

The researchers also showed L1 retrotransposons have a more significant impact on the origin of new transcripts/genes than previously thought. Furthermore, they found that alternative splicing is extraordinarily widespread for genes involved in specific biological functions like protein binding, nucleoside binding, neuron projection, membrane organization and cell adhesion. In the end, the total number of human transcripts with protein-coding potential was estimated to be at least 204,950. 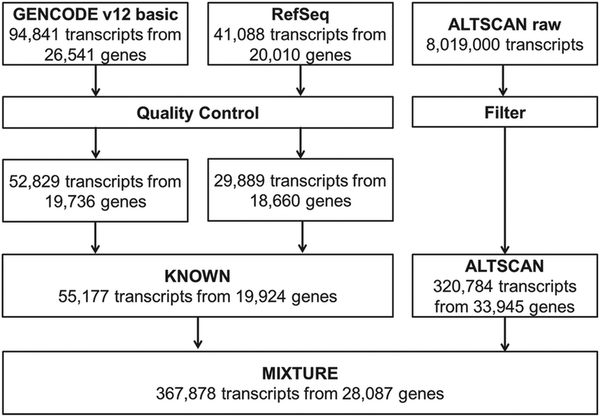