Deep inside your cells, DNA provides the instructions to produce proteins, the essential molecules that grow and maintain your body.

RNA is the intermediary nucleic acid that carries these instructions from DNA to ribosomes, where proteins are produced within the cell. But in humans and in plants, only a tiny fraction of DNA produces the RNA that carries out protein-building instructions. In humans, almost 98% of the genome does not encode proteins. However, it often gives rise to RNA that does not produce proteins, called noncoding RNA. So what does this portion of the genome do?

“Over the years, studies have found that more than 80% of the genome may be involved in transcription, or producing noncoding RNA,” said Andrzej Wierzbicki, a professor in the University of Michigan Department of Molecular, Cellular and Developmental Biology. “So the dilemma was: Is all this noncoding RNA functional? Is it important for something? Or is it just noise of the process of transcription or an error of detection methods?”

Now, research led by Wierzbicki shows that in plants, a portion of this noncoding RNA may play an essential role in protecting the integrity of the genome. This portion of noncoding RNA is produced from transposons, rogue pieces of genes that jump around within DNA, inserting themselves haphazardly and causing genetic diversity. Sometimes this diversity is beneficial, aiding evolution, says Wierzbicki, but sometimes it can trigger mutations that can lead to disease.

The noncoding RNA produced from transposons is thought to protect the genome by making sure that transposable elements are permanently turned off. But how are transposons selected for silencing in the first place? In a recent study, the research team found evidence that this noncoding RNA is produced throughout the entire genome, not just at or around transposons. Their results are published in the Proceedings of the National Academy of Sciences.

“We are essentially proposing a new model. Our model says the entire genome is transcribed, and this pervasive transcription is functional,” said Wierzbicki, also a member of the Center for RNA Biomedicine at U-M. “This pervasive noncoding transcription acts as a surveillance system, catching and silencing new transposons as they appear. This speculative model will hopefully be able to be tested in more detail.”

These results include two parts. First, the researchers had to determine that this noncoding RNA detected throughout the genome is real, not simply an error of detection methods. To do this, the researchers focused on an enzyme called an RNA polymerase. The role of RNA polymerases is to produce RNA using the sequence of DNA as a template, Wierzbicki said.

The researchers used a plant model called Arabidopsis thaliana, which has a specialized RNA polymerase dedicated to silencing transposons. The researchers could mutate this particular polymerase enzyme and create plants that were unable to produce an entire category of noncoding RNA. No other eukaryotic organism, including humans, would survive with an RNA polymerase mutated, which makes plants uniquely suited to studying the roles of noncoding RNA.

With the polymerase enzyme mutated, the researchers then compared the mutated plant to a wild-type plant—a plant that had not been altered. If they detected RNA in the wild-type plant but not in the mutant plant, they could confirm that the noncoding RNA was real. And they did.

One of the researchers, Masayuki Tsuzuki, at the time a postdoctoral fellow in the Wierzbicki lab and now an assistant professor at the University of Tokyo, looked for this transcription by using high-throughput sequencing. This sequencing is an approach that produces a huge amount of data corresponding to noncoding transcription. In-depth analysis of these results allowed the group to prove where noncoding transcription is present.

“So when the transposon is new, or it has been activated in a way that the cell forgot it was previously marked as a foreign object, how can it be recognized as being foreign? Wierzbicki said. “There’s one common factor that’s always needed, and that’s this noncoding RNA that we are studying. No matter where the transposon was inserted in the gene, it could not be turned off if the noncoding RNA was not present. 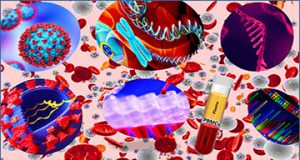